St Patrick's Day Content from the guide to life, the universe and everything 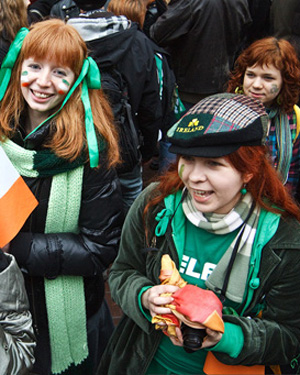 St Patrick's Day, the festival of the patron saint of Ireland, is celebrated each year on 17 March. Unlike most other national days, St Patrick's Day is celebrated around the world, particularly in the US where people commemorate the day by, among other things, colouring rivers and beer green - in Ireland people celebrate it by going green after drinking rivers of beer.

So who was St Patrick? And why is he so fondly remembered by so many people around the world 1,500 years after his death?

Legend has it that St Patrick was born Maewyn Succat, to an Anglo-Roman family in Wales, in 415 AD. When he was 16 years of age he was captured by an Irish pagan warlord, Niall of the Nine Hostages, and he spent six miserable years in Ireland until he escaped to France.

Maewyn went on to become a priest, changing his name to Patricius, or Patrick, which derives from the Latin for father-figure - other derivations include patrician, patron and patronise. Rather than forgetting his wretched experiences in Ireland, he decided to go back to the country that enslaved him, and he spent his later years preaching Christianity to the Irish, banishing snakes and popularizing the shamrock. He used this three-leaved grass to help explain the Trinity, how God could be three entities (God the Father, God the Son and God the Holy Spirit) yet, at the same time, be one. This is the reason that the shamrock is the national emblem for Ireland.

Not only that, but, unlike the fully indoctrinated Roman Catholic monks, he was quite open minded, and so a lot of the pagan influences found their way into the Irish Catholic faith. His greatest legacy was a platoon of scholar-monks, who sought to preserve the classical works of Greece and Rome. So, at the same time the Romans were burning down the Great Library at Alexandria, Irish Catholics were faithfully copying much of what was being lost. When Roman Catholics disagreed with a certain text, they burned it, but Irish Catholics copied it word for word, but made editorials in the margins like 'this is pure rubbish, here'.

According to legend, St Patrick got rid of all the snakes from Ireland, so he must have also got rid of all fossilized remains of snakes and any references to snakes in the ancient literature and legends. But to this day, there are no snakes in Ireland except one known as the slow worm. It's found somewhere off the western seaboard - Kerry or Clare - and strictly speaking it's not a snake, it's a lizard, but it certainly looks like a snake.

St Patrick is believed to have died in 493 AD and his remains are assumed to be buried in a grave at Down Cathedral in Downpatrick.

That might have been that, but for the fact that the Irish took to this new religion with a gusto bordering on fanaticism. Huge monasteries were built across the land, and missionaries such as St Gallen, St Columkille and St Columbanus left Ireland to re-convert Europe during the Dark Ages. Ultimate pride of place was given to St Patrick - the man who converted the Irish.

The memory of St Patrick today possibly lends itself more to the Nationalism of the 18th Century than to his real place in history. As political movements grew advocating separation from Britain, the Irish used ancient symbols of identity to differentiate themselves from the British. St Patrick was an obvious choice, not so much by birth1, but because of his legacy. As Irish people left their homeland through famine, poverty, deportation and emigration, they clung on to this powerful symbol of national identity. The Great Famine of 1847 swelled the numbers of Irish emigrants around the world, and this lead to the celebration becoming something of a global event.

A Hymn by St Patrick

I bind unto myself today
The strong name of the Trinity,
By invocation of the same,
The Three in One, and One in Three.

I bind this day to me for ever,
By power of faith, Christ's incarnation;
His baptism in the Jordan river;
His death on cross for my salvation;
His bursting from the spiced tomb;
His riding up th heavenly way;
His coming at the day of doom:
I bind unto myself today.

I bind unto myself today
The virtues of the star-lit heaven,
The glorious sun's life-giving ray,
The whiteness of the moon at even,
The flashing of the lightning free,
The whirling wind's tempestuous shocks,
The stable earth, the deep salt sea,
Around the old eternal rocks.

I bind unto myself today
The power of God to hold and lead,
His eye to watch, his might to stay,
His ear to hearken to my need,
The wisdom of my God to teach,
His hand to guide, his shield to ward,
The word of God to give me speech,
His heavenly host to be my guard.

I bind unto myself today
The strong name of the Trinity,
By invocation of the same,
The Three in One, and One in Three
Of whom all nature hath creation,
Eternal Father, Spirit, Word,
Praise to the Lord of my salvation:
Salvation is of Christ the Lord.

The large-scale big parades for St Patrick are actually an American Invention, first hosted in Boston in 1737. Not to be outdone or outshone, the people of Ireland decided to inaugurate their own parade to start the day's festivities. However, the people of Belfast, decided they wanted to have a St Patrick's Day Parade to compete with the one in Dublin, and to copy the Americans' one. Unfortunately the intent of unifying the city2 as Patrick is the Saint of the two opposed communities has failed to materialize, because despite the best intentions and words of the organisors that it is not a political parade, most of the early impetus came from the Nationalist community of West Belfast, who were already running their own festival. The unfortunate outcome is that the Unionist community feel threatened by the parade and the prominence of the Green, White and Gold/Orange of the Irish Republic's flag which are so prominent in the floats and spectators. (The three colours were ironically chosen to represent the two communities Green for Nationalist, Orange for Unionist and White for Peace).

The end result has been that when Unionists control the city council, funding for the parade is axed; when Nationalists are in control it is funded. However it is a sizeable parade if only it could embrace everyone.

Celebrating the Day in Ireland

If you're lucky enough to find yourself in Ireland for St Patrick's Day, you'll find a few tips here to get you to some of the best boozers around.

A Virtual Pub Crawl Around Dublin

As St Patrick's day dawns, and the hotels and taxis of Dublin are stretched to capacity, we thought we'd collate a virtual pub crawl around the fair city for those Researchers who can't make it over there.

We'll start at the Icon bar, up by Leopardstown racetrack, because it's a fair way out of the city and we'll not be able to get taxis back later on in the day. Greet the landlord and hand over your hard won Euros3 - and savour that blissful quiet as the first pint of the black stuff settles itself down. This first pint is to be taken slowly and conversation will be muted and will cover such topics as the weather and what the form is like for the next race.

Next we'll head down the Stillorgan dual-carriageway 1 towards Sandymount and the Merrion Inn which is known as the 'M1' to the locals. Here we will have another pint, and perhaps a hot whiskey to warm the soul, and talk will be of the paintings on the walls and the nature of art in general. If we are in time for lunch then try the homemade burger with whiskey and mushroom sauce, it's a gourmet treat.

Fortified and starting to feel warm inside, it is time to take the DART2 to the city centre itself. Our first port of call is Messrs. Maguires where it is customary to try a pint of 'Extra' which is a double-brewed stout with a very hoppy taste. Most people don't like it and so switch back to the Guinness, but if you acquire a taste for it, you'll probably have another pint. By now conversation should have turned to the eternal mysteries of life, such as which side of an Irish coin constitutes heads and why the bubbles in a pint that's settling appear to go downwards.

If you've been good then treat yourself to a pint in Mulligans in Tara Street round the corner, which is a real 'auld fellahs' pub which does the best pint of Guinness in Dublin, but don't flock there all at once as a crowd would surely spoil the place. Conversation will be on whatever topic the drunkest of the locals chooses, for we are in his 'place'.

By now we'll be itching to see the parade itself, so we'll walk around the corner to The Dawson Lounge which is the smallest pub in Dublin, and has the feel of having been built in someone's cellar. Here we will skull a couple of pints in anticipation of the parade itself. Conversation topics will be optional.

Dashing out to St Stephens Green we'll find that all the best vantage points have long since gone and we haven't the strength to stand so we'll go for a lie down in the middle of the park, with a bottle of cheap Champagne... and possibly doze off.

If at any point you should find yourself in The Montrose, Doyle's or the UCD Students bar, don't fret - there's sure to be craic and drink to be found wherever you are.

You can add as many pubs as you like along the way but the Porther House is another possibility. It's a great place, lots of seating, live music, and mussels by the kilo, once the beer's been flowing for a while.

How to Celebrate the Great Day Abroad

If you can't make it to Ireland for St Patrick's Day, then here are some ideas on celebrations around the world:

Here's a recipe for Guinness Punch for those that can't handle the black stuff on its own.

Blend all ingredients in a blender or mix in bowl with a whisk then drink.

The Wonderful World of Guinness

There are currently 51 countries that brew the black stuff and a warm world-wide welcome to Ethiopia - the newest country to start brewing Guinness.

1Legend has it that St Patrick was born either in Rome, Brittany, England or Wales.2Belfast is the provincial capital of Northern Ireland, which, is part of the United Kingdom, a situation which is supported by the Unionists, while, in opposition the Nationalists would prefer Northern Ireland to be part of the Republic of Ireland.3The official currency of the Republic of Ireland switched from Irish pounds, or punts, to the Euro in 2002.