A Quick Guide to Norway Content from the guide to life, the universe and everything 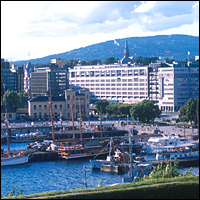 Norway is a small country with a small population and is less known outside its borders than the inhabitants may wish. Surveys by the Norwegian press have shown that, out in the world, Norway is known as:

Hopefully this entry will leave a lasting impression of a few more facts about Norway in the minds of those who read it and establish once and for all that Norway is a country of its own and that the capital of Sweden is irrelevant2.

Norway lies in the north-west of Europe, sharing the Scandinavian peninsula with Sweden. Its shape is somewhat like a guitar, with a long narrow neck to the north and a wider southern part. The long axis stretches some 1600km, the width reaches its maximum at about 400km, and the neck is, at one point, just a few kilometres.

Norway has just over 4.5 million inhabitants and is a constitutional monarchy. The monarch, currently Harald V, has mostly ceremonial powers and no practical influence over the government.

Norway has a hefty budget surplus due to extensive oil and natural gas resources in the North Sea. Chief exports are petroleum and petroleum products, machinery and equipment, metals, chemicals, ships and fish. The petrochemical and metal industries benefit from the abundance of hydropower.

Stereotypical descriptions of Norwegians range from restrained but friendly to arrogant and pushy. Real life experience with genuine Norwegians shows that this all depends on mood, stage of drunkenness and topic of conversation.

If you stop reading at this point you should know that Norwegians consider Norway to be both the best and the worst country in the world. Disagreeing with any Norwegian in this, by either putting down one of the features the Norwegian approves of or exalting one he dislikes, is very unwise. The actual response will vary with mood, drunkenness and topic, but will not be positive.

As mentioned in the summary, Norway is a long and narrow country in north-west Europe. With extremes at 4° and 32°E and 58° and 71°N, it pokes into two time-zones and stretches far above and below the Arctic circle. In comparison, Alaska mostly lies between the same north-south boundaries, and the UK is almost entirely south of Norway. Pivoting Norway around, its southern tip brings the far north down to Rome. Norway has a land area of 320,000 km², about a third larger than the UK3, but while the UK is 80% fields, pastures and woodland, Norway has 3% arable land, 27% forest and 70% other, mostly mountain plateau.

Being a coastal nation and having spent the last ice-age covered in glaciers, it is unsurprising that Norway is indeed a land of fjords. These glacier-carved wonders are the reason Norway has a 22,000km coast line. If you look at a detailed map you will see that Norway is almost all glacial valleys, glacial fjords and lots and lots of tiny islands, apart from the bits that are mountain plateau, obviously.

Due to the Gulf Stream, all of Norway is considerably warmer than areas at the same latitude such as Alaska, Northern Canada and Siberia. Any overall description of the climate would, however, be 90% wrong, as the climate differs widely between north and south; coast and inland; west and east; and high and low. If you're going to Norway you should equip yourself for all weather, or check what the local climate is like. As we - 'we' being someone who didn't forget to bring a sweater when everyone else is freezing - say in Norway, 'There's no such thing as bad weather, just bad clothing'.

The dominant flora in Norway is heather, mountain birch, dwarf birch and shrub willow4. Most Norwegians are, however, unaware of this. As they spend most of the time in the lowland, they see either farmland, forest or houses. Ask a representative selection of Norwegians and you might get the impression that the dominant flora is fir, spruce and pine. Norwegians do spend quite some time in the areas where heather, etc is dominant but the majority only do so in the winter, when the flora is invisible.

The average Norwegian would be surprised to learn that only 27% of Norway is covered by forest. This is because, apart from the mountain plateaus, practically all open areas in Norway are man-made, and the majority of Norwegians live in the lowlands in south and middle Norway and are used to seeing trees everywhere they look. Fields and pastures have all been claimed from the forest by hard-working Norwegian forefathers and foremothers, and are reclaimed by the forest if left unattended.

Norwegian fauna is dominated by the 'king of the forest': the majestic 'elg' (Alces alces, elk or moose). Hunting elk is very common in rural Norway and keeps the elk population in check in the absence of large predators. Besides moose, there are roe deer, red deer, foxes, hares, reindeer, badgers, wolverines, lynx, wolves, owls, hawks, mice, squirrels, gulls, ducks... You get the picture. Lots and lots of animals.

In Norwegian, Norway is called Norge or Noreg, so you have to look at foreign languages or Old Norse (Norvegr) to learn that the name of the country literally means 'road north'.

All Norwegians know that Harald Fair-hair (Harald Hårfagre) was the first ruler of all of Norway and finalised this feat at the battle of Hafrsfjord in 872. In the next few hundred years, Norwegian Vikings traded, raided and conquered alongside their Danish brothers all over Western Europe, and Norway reached its largest size in the mid 1200s when the Norwegian king ruled over:

Between 1349 and 1350, the Black Death killed one-half to two-thirds of Norway's population during an economic recession, and for some reason Norway was slower to recover than its Nordic neighbours. Norway, Denmark and Sweden had shared kings several times in the Viking age, but in 1450 Norway came under Danish rule and remained so until 1814.

In 1814, Norwegian politicians took advantage of Denmark's defeat along with Napoleon and declared independence, even though the peace treaty said Norway had been ceded to Sweden. The new constitution was signed on 17 May, today Norway's constitution day and main national holiday. Eventually the Swedish king got around to claiming Norway and sent in the army. After a fairly easy campaign, Norway was forced to accept the Swedish king as ruler, but the new Norwegian constitution remained in force with a few revisions and Norway now had its own parliament.

Independence, Occupation and the Oil

The union between Sweden and Norway ended late in 1905 on a date few Norwegians remember. Danish prince Carl became king of Norway and took the name Haakon VII.

Norway was occupied by Germany during World War II, and after the war was active in the formation of the United Nations, with Trygve Lie becoming the first Secretary-General. In 1949, Norway gave up its former policy of neutrality and joined NATO5. In 1970, oil started flowing for real from platforms in the North Sea and Norway became an oil-producing nation.

Edvard Grieg (1843-1907) is Norway's foremost classical composer. His most famous works - part of the music to Henrik Ibsen's Peer Gynt - are In the Hall of the Mountain King and Morning Mood. Even if you don't know them you are likely to have heard these somewhere. For example, Morning Mood is played when the sun rises over Pepperland in the film Yellow Submarine.

Henrik Ibsen (1828-1906) is Norway's most important playwright and, according to some, is the most frequently performed dramatist in the world after Shakespeare. Whether that statement is true or not, it is a fact that Ibsen's plays are still performed all over the world. A Doll's House (at the time of writing) was recently performed in China, and An Enemy of the People, Ghosts, Hedda Gabler, Peer Gynt and others of his plays are, in any given year, performed in several countries.

Edvard Munch (1863-1944) had no idea what he spawned when he painted the now ubiquitous painting The Scream in 1893. Although today he inspires cartoonists and horror film-makers, Edvard Munch was considered a main influence on the development of German Impressionism. Some of his works are today priced in the millions, but you can pick up a print of The Scream in any art poster shop.

Norwegian currency is the krone (plural kroner), abbreviated kr or indicated by ,-. The international currency code is NOK. A krone is divided into 100 ø and, on 19 June, 2002 the exchange rate was 7.7NOK for 1USD and 11.5NOK for 1GBP.

Prices in Norway are higher than in the rest of Europe, with salaries being proportionally larger in general. Alcohol is exceptionally expensive due to heavy taxes and a state monopoly on selling wine and spirits - Norwegians generally smuggle home a bottle or two above the quota of 2 litres of wine or 1 litre of stronger stuff.

Visitors should look for the 'Tax free for tourists' signs. Shopping in one of these stores allows you to reclaim the 'mva6' when leaving the country.

Norway is full of sights worth seeing, all of which deserve an entry of their own. None mentioned, none forgotten, but worth mentioning in a hurry are:

As mentioned above, prices are high in Norway, but if you have lots of money you should bring home some knitwear, preferably a black and white 'lusekofte' jacket. If you want something smaller, there is a plethora of troll dolls to choose from, or you can go with the pewter Viking ships. A troll is really a must though, and you should invest in a book on the topic to remove some of the misconceptions you have.

Having played little brother to Sweden for almost 200 years, Norway suffers from a slight inferiority complex. Sweden has twice as many people, a third as large land area (with less mountain plateaus), more successful artists (ABBA springs to mind), a more impressive history, Volvo and Saab. And, let's face it, Norwegians have always paid much more attention to Sweden and Swedes than the other way around.

A result of this is the strong focus on everything Norwegian and a patriotism that borders on the ridiculous. Very important to Norwegians and disappointingly (to Norwegians) unimportant to foreigners are the following facts:

Every time Norway is mentioned in the international press it is big news in Norway, and Norwegians are very disappointed when they discover that foreigners they meet don't all memorise every mention of Norway in the papers. And they will take it as a grave insult if a foreigner confuses Norway and Sweden in any way. If you have to guess whether something is Norwegian or Swedish, go for Norwegian. If you're wrong, the Norwegian will still be annoyed, but not so much as if you had erred in the other direction.

This entry ends with the words of Norway's national anthem Ja, vi elsker.

1Norwegian Prime Minister from 1986-1989 and 1990-1996 and current (1998-2003) Director General of the World Health Organization.2Actually, it's not irrelevant - it's Stockholm.3A little larger than New Mexico.4There are numerous species of 'shrub-like' willow in the Norwegian mountains.5North Atlantic Treaty Organisation - the west's main cold-war military alliance.6Value added tax.7Disputed by Icelanders, as Leiv Eriksson's father was exiled from Norway and Leiv grew up on Iceland.