Ghost Towns Content from the guide to life, the universe and everything 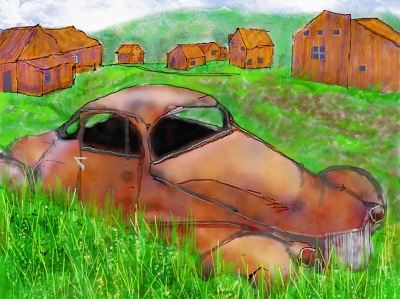 In isolated mountain valleys and boreal forests, on desert plateaus, and every place in between, ghost towns dot the landscape. The name is appropriate. Ghost towns are those locales where the inhabitants have left their homes, businesses, and in some cases, furniture and personal belongings behind as they pursue jobs and material wealth. They are entire towns with the remnant of a main street lined by saloons, bordellos, blacksmith shops, banks and livery stables. Private residences radiate outward on side streets. Or the town is a forlorn collection of cabins hugging the sides of a canyon and largely existing in the memory of local residents. Ghost towns are the result of natural resource-based boom and bust economies. They are often found in areas rich in precious metals. Many towns are located near abandoned mines, made legendary for the millions in gold and silver bullion pulled out of the earth nearby. These lost communities can also be found near formerly extensive old-growth forests. As the minerals 'played out', the timber clear cut, and the grasslands overgrazed, the citizens of these temporary cities left for their next big chance elsewhere.

The towns are very popular with tourists. Why? Many are in picturesque parts of the Western United States that already draw visitors. Locations like Bannack, Montana, where historic gold strikes occurred, are state parks. Along the front of the scenic Canadian Rockies, former North West Company fur trading posts tempt people to leave the wonders of Banff and Jasper National Parks. History buffs and the general public get a chance to relive the past in some of the better preserved towns. Bodie, in the Sierra Nevada Mountains of California, was abandoned along with almost all of the belongings of the former inhabitants. Hollywood has even used some ghost towns as backdrops for Westerns, such as Elkhorn, Montana. Here movie fans come to see where their celluloid heroes lived, fought and died.

Some ghost towns have come back from the brink of destruction. Prior to the 1970s, Telluride, Colorado, had only a handful of inhabitants, an abandoned gold mine, and a lot of mouldering buildings. Now, with one of the best ski resorts in the Central Rockies it has become a Mecca for powder hounds and movie stars. The area between Dawson City, Yukon Territory and Fairbanks, Alaska, was once dotted with towns during and after the Klondike Gold Rush of 1898. During the Great Depression, the population dwindled to just a few hundred inhabitants. Today this region attracts thousands of tourists every year. Not only do these communities celebrate the colourful history of the area, but they give visitors a chance to strike it rich. For a nominal fee tourists can pan for gold themselves. Tombstone has drawn upon its association with Wyatt Earp and the Clantons to bring tourists to southern Arizona. Thanks to historical re-enactions, the shootout at the OK Corral continues to this day.

This phenomenon is now spreading to other parts of the world. The majority of ghost towns are associated with the famous strikes of the 19th Century: the California Gold Rush of 1849, the Alder Gulch Strike of 1864, and the numerous silver discoveries in the Colorado Rockies at places like Leadville. Lumber mills and towns in the Georgian Bay region of Northern Ontario were abandoned as recently as the middle of the 20th Century when the forests were lost to fires and overcutting. Today, the mining industry is expanding into previously ignored areas of the globe such as Southeastern Asia. Timber companies are sweeping through the Amazon Basin in the drive to get desirable hardwoods on the international market. When these resources disappear, the communities based upon them will be left to the elements.