Historical Re-enactment Content from the guide to life, the universe and everything 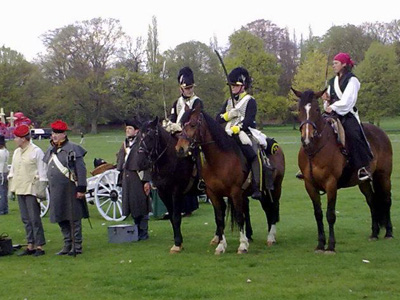 Picture the scene... It is a fine summer's day, an ancient castle stands in the background and suddenly the roar of cannon is heard. The beat of a drum sounds and rank upon rank of infantry march towards the enemy, the sun glinting off brightly polished buttons and buckles. The cavalry stand ready, sabres drawn, and on the hill the General sits astride his horse sending messengers to relay his commands to the troops.

In one small corner of England the year is 1815 and a small army of brave Englishmen is about to engage in a battle with the old enemy, the French. This is living history, brought to the modern public by historical re-enactors. Famous battles of the past fought again and again, and new battles devised.

The scope for historical re-enactment covers all periods from the early Iron Age Celts to the Second World War. One of the most well known re-enactment groups in the UK is the Sealed Knot. Formed in 1968 this organisation now has over 6,000 members who re-enact the Royalist and Parliamentarian battles of the English Civil War. The Napoleonic Association as the name suggests concern themselves with the Napoleonic Era, re-enacting the campaigns from that time all over Europe.

There are numerous other groups, too many to mention here, but just head out onto the Internet to see what is going on.

There are many things which bring a person to re-enactment, a love of history, a desire to spend time away from the hustle and bustle of the modern world, or simply the chance to return to that childhood world of dressing up. But re-enactment is not simply an opportunity to fight, most re-enactment groups also provide living history displays where the public can see life as it would have been, with authentic camps and cooking arrangements.

Historical re-enactment goes beyond Role Playing by seeking to provide an authentic representation of a particular period, the clothes worn, the weapons used etc. To support this re-enactors may spend many hours in Museums researching the uniforms, weapons and military tactics of their chosen period. These items are then re-constructed with meticulous attention to detail using, where possible, authentic materials. Occasionally a genuine, original article may be found and used.

Be warned, however, re-enactment is not a cheap hobby. To become a fully kitted out Dragoon in an English Cavalry Regiment, like the 15th (Kings) Light Dragoons (Hussars), can cost over £2,000. Admittedly that does include all the tack for the horse as well, so foot regiments may well be cheaper.

The best thing about Historical Re-enactment? After the battle you can sit down with your enemy and discuss it all over again over a friendly pint (or six).