Baseball Basics Content from the guide to life, the universe and everything 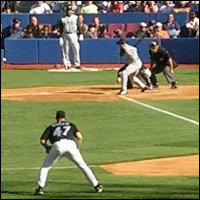 Baseball is the national past-time of America as well as being popular in several other areas of the world. It is not a simple game, though, and it can take years to gain proficiency in watching or playing baseball.

This entry gives you the basics of baseball. If you stumble onto an expression you don't understand, keep reading, and you'll eventually find it explained further on in the text.

The batter and the base runners make up the offense. The batter tries to hit the ball that is pitched, and as soon as he hits a ball that it not fouled off, a play begins. Once a hitter has made contact with the ball he becomes a base runner; the objective being to go round the bases and get home safely for a run.

It is most important to keep your eye on the ball and rotate your dominant hand over the top of your bottom hand for a better swing. The objective when hitting the ball is to make solid contact with the ball. Power is not always the answer.

If the ball goes a long distance, the batter might have the opportunity to go past first base to second, third or home base. All of the bases are lined around the corners of a diamond, and you have to run to first before tagging second, second before third etc. The hitter wants to get as far as possible to get closer to home plate and a run (point) for their team.

To stop a run for their opponent, a team must have a good defense.

The first baseman covers first base and is one of the most difficult positions to play because you must be able to catch the ball under any circumstance, such as a one hop or a 90mph throw from third base (like Cal Ripkin Jr, a legend, might have thrown).

The second baseman covers second base and is responsible for when a ball is hit between third and second base. This doesn't happen particularly often though, as left handed hitters, who make up a relatively small percentage of batters, are the ones who tend to hit in the second-third base gap.

The Third Baseman covers third base and any ball that comes between the third base line and 30 feet towards second base. He also covers any bunts from the pitcher to third base.

The catcher's task is vast; he must watch all base runners and he must know his opponents so he can correctly signal the pitcher. He must have the accuracy of a pitcher and the arm of a centre fielder to throw out any potential base-stealers. He backs up first and third base coverage in case of a bad throw.

The main duty of the Pitcher is to pitch, he takes his cues from the catcher for what kind of pitch to throw (usually with secret finger signals between his thighs). He must watch for signals from his catcher that any base runner is leading too far out and that he should throw to the appropriate baseman to keep the runner honest (to keep him from stealing a base). If the ball is hit to the first baseman and he is too far from the base the pitcher must cover first.

Since pitching is a difficult job, and a pitcher's arm often gets tired, a team rotates this position more often than not. It is relatively rare to see one pitcher finish a game. The pitcher that finishes the game usually comes in late, and is called a 'closer'. It's his job to ensure that his team maintains a lead or wins.

The position of Right Field is played behind first base. The objective of this player is to catch any fly ball or knock down any ball hit in his direction that the infield missed and get it back to the second baseman or first baseman if someone is running home. First and second basemen are considered cut-off men which means they 'cut-off' the ball from the outfield to home for a more accurate throw.

The position of Centre Field is played behind second base. The objective of this player is also to catch any fly ball or knock down any ball hit in his direction that the infield missed and get it back to the second baseman or the shortstop if someone is running home. The shortstop and second basemen are considered cut-off men for the centre fielder.

The position of Left Field is played behind third base. The objective of this player is also to catch any fly ball or knock down any ball hit in his direction that the infield missed and get it back to the second baseman, third baseman, or the shotstop if someone is running home. The shortstop, second, and third basemen are considered cut-off men for the left fielder.

The umpire stands behind the catcher and pitcher to make all the final decisions on whether a base runner is safe or out. Umpires decide if pitches thrown are strikes or balls and if hits are foul or home runs and if there is any interference with a home run. There are also various umpires about the field, at least one at every base. Confused? Keep reading, all the terms will eventually be explained.

The object of the game is to score runs. A run is when a hitter/base runner makes it to home base (touching first, second, and third base) without getting tagged out. The hitter must hit the baseball into the field for a hit before they are allowed the chance to run the bases.

In order to hit, the hitter comes out of his team's dugout (a sunken, protected place for players and coaches of the team to sit during the game) alone and steps up to home plate. He stands alongside it, with his bat in his hands. Behind home plate are the catcher and the umpire (like a referee). The pitcher throws the ball in a way he hopes that the batter won't be able to hit it. If the batter makes contact, it can be a hit to the field or a foul if it is outside of the foul line, which is out of play. If it is a hit, the batter drops his bat and runs to try run around the bases. If it is a foul, he tries again, and it is scored as a strike1. If he doesn't make contact, but swings, it is a strike. If he doesn't make contact, but doesn't swing, and the ball is outside of the strike zone, it is a ball. If he doesn't swing, but it is inside the strike zone, it is a strike.

There are nine innings in a game. An inning is where each team gets to play until they accrue three outs in one way or another. Outs can come from any number of ways. If a ball they hit is caught before touching the ground, they are automatically out. A player can also be struck out if they swing at the ball three times and miss, which is called a strike. A strike is determined by the pitch being thrown inside the strike zone. Obviously, batters don't swing at pitches that aren't able to be hit, which don't count as strikes, but rather as 'balls'. But if a batter doesn't swing at a ball that is considered by the umpire to be able to have been hit, it counts as a strike. They can also get the credit of a strike by hitting a foul ball, which is a ball that is hit out of play. A player cannot get his third strike from a foul though, so if a player hits a foul with two strikes, the foul ball is ignored.

If there is a tie getting to first or the umpire cannot determine whether the ball or the runner made it to first base first the runner gets the base by default. A player can also advance to first base by getting four balls when up at bat. This is called a 'walk'.

In the event of a tied game at the end of nine innings the game goes into extra innings until one team is ahead at the end of an inning.

Players score by completing a run, one point is awarded per run. A run occurs when a hitter makes it around to all of the bases and back to home without getting tagged by a fielder with the ball. Another way to score a run is to hit a homerun.

The field (never called the 'pitch', as that's an entirely different thing in this sport) of the game varies from each stadium, but it is generally designed as a triangle with one end rounded off. Home plate (the place the batter hits the ball) is at the corner of the field opposite the rounded off end. 90 feet away from home plate is first base, 90 feet from that is second base etc. It forms a diamond called the 'infield', where most game play takes place.

Outside the diamond is the 'outfield', where defensive players attempt to catch balls that fly outside of the infield.

Each ballpark has its own contours and its own style that can affect game play. For instance, many balls that could have been home runs in any other parks have failed to make it over the wall at Fenway's tall Green Monster wall.

1Unless the hitter has already accrued two strikes.2Commonly referred to as a 'homer'.