Papal Names Content from the guide to life, the universe and everything 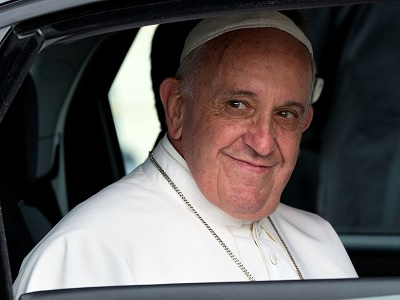 You may have noticed that when a Cardinal becomes Pope1 he changes his name. Pope Benedict XVI was born Joseph Ratzinger, for example. There is a long tradition of such name changes.

The tradition of taking a new name originated in 553 AD when Pope Mercurius changed his name, becoming Pope John II. He did so as the name 'Mercurius' comes from the Roman god Mercury and is therefore pagan. As a result, he felt that it was not appropriate for a pope. John XII (Pope 955-964 AD) also changed his name for the same reasons; his given name was 'Octavianus'.

No pope has ever named themselves after the first Pope, Peter. Two men whose birth names were Peter changed their names upon election. They were John XIV (served from 983-984 AD) and Sergius IV (1009-1012 AD).

During the Great (or Western) Schism Christendom had to choose which of two, and at one point three, popes to follow. The papacy had moved for a while to Avignon but on its return and the election of a new pope, it became clear that a mistake had been made. The new pope was very unpopular and many of the Cardinals chose a rival pope who set up shop in Avignon. The French popes usually chose names which were more appropriate to France, while Roman popes chose names from before the Schism.

The name is chosen immediately after the Cardinal has accepted his election by his fellow cardinals. The Cardinal Dean first asks him whether he accepts his election. When he agrees, he is asked by what name he would like to be known. The answer should come quickly, especially in the media age, as an official announcement is speedily drawn up.

Popes are not obliged to change their name - the last pope to keep his existing name was Pope Marcellus II who served in 1555 - but it is traditional. Most choose from the names of the previous popes or saints and choose the name to honour a holy figure whom they admire. For example, Pope John Paul II chose his name to honour his immediate predecessor John Paul I, who had died after only 33 days as Pope. The choice can also signal a desire to follow the papal route, as it were, of the namesake.

There are other reasons too - Benedict XV chose the name as the last pope from his home city had also used it. In the past there were several great families which provided multiple popes. In this case the new pontiff would usually name himself after his kinsman. Popes from religious orders, such as the Benedictine monks, often copied the name of a predecessor who had also been in the same order.

Origins of Some Papal Names

Many if not most papal names come from Latin, which is of course the language of the papacy. Several names, including Innocent, Clement and Pius, refer to desirable character traits. Another popular papal name, Leo, means 'lion'. Celestine, used to date by five popes, means 'heavenly'. Sixtus, meaning 'sixth' was rather sensibly used by Sixtus I, who was the sixth pope after Peter. Quite why several of his successors chose the same name is not clear. The name of Pope Severinus means 'austere' or 'stern', while Felix meant 'happy' and Boniface meant 'lucky'. One of the most commonly used papal names, Benedict, means 'blessed.' There have been two popes named Adeodatus, which means 'given from God'.

The name Nicholas, used thus far by five popes, is not Latin but Greek and means 'victor of the people'. 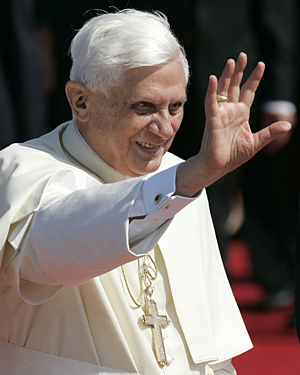 Image of Pope Francis courtesy of the White House.

1The head of the Roman Catholic Church.