The Rise and Rise of the Handbag Content from the guide to life, the universe and everything 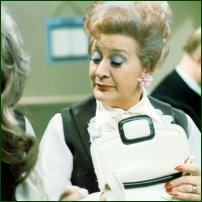 The modern handbag, as toted around by women, seldom costs us a thought, but the emergence of the man bag has become newsworthy in both print and television in recent times1. This entry proposes to take a look at the origins and development of the bag as an essential accessory of the 21st Century.

Before all the men pack their man bags and run it's important to note that the first recorded bags were only carried by men. Lacking the room for a laptop, the first bags are recorded in Egyptian hieroglyphs and are shown as sort of pouches carried around the waists of Egyptian men. These early bags were sewn from a circle of cloth and had a double-stitched hem to include a drawstring. The drawstring was then attached around a belt and used to house precious items which may or may not have been of use to the Egyptian man about town.

Still in the years BC, men were taking their bags to work, the farmers to carry their seeds to the fields and African holy men to hold their beads or bones, but it wasn't until the 14th Century, when bags were first recorded in literature, that the evolution of the article can be monitored. The 14th Century bags were worn by the wealthy to house their currency and small valuables, the bags themselves were not unlike the Egyptian bag and worn with a belt or girdle. Where these more modern bags stood apart was their decoration, as they were beaded and bejewelled to reflect the social status of the wearer.

By the 16th Century the bag had evolved in two directions, the small pouch or purse, and the bag as we would recognise it today. The bag became larger and more practical. It was used mainly by the traveller and had a longer strap which could be worn diagonally across the body in the satchel fashion, leaving the wearer's hands free. In those times leather became the material of choice rather than the more basic woven materials. The ladies would carry 'sweet' bags containing perfumes and herbs for their handkerchiefs, to disguise the foul smells of the era. The gentlemen would carry their coinage or counters for gambling. There was also the emergence of the document wallet for carrying those all important letters and deeds around town, the first briefcase or courier bag if you like.

It was also in the 16th Century that the pouch took another sidestep to become the earliest form of pocket, and is recorded as a small pouch being sewn into the garments of the wearer.

Meanwhile, as the bag was busy developing into luggage in the 17th Century, the pouch or purse was developing into pockets and of course the handbag. These little bags were carried by both men and women and began to vary in size and shape from the basic pouch. Embroidery was an essential skill for the women of the day, therefore, the bags became little works of art, decorated with love by hand-stitched embroidery. They then began to get larger and more unwieldy, so to save carrying the cumbersome bags they again sidestepped to pockets sewn onto the inside of their clothing.

By the time we reach the 18th Century the ladies' pockets were so large they were ruining the hang of their clothing, so they became detached again and were worn on a belt under their skirts. The pockets, or bags were accessed by small slits in the seams of the outer garments, but were not entirely safe as can be evidenced in the children's rhyme

Lucy Locket lost her pocket,
Kitty Fisher found it.
Ne'er a penny was there in it
Just the ribbon round it.

When we reach the late 18th Century the little handbags were firmly re-established because, true to form, the ladies were filling the pockets under their garments with so much stuff that they again ruined the lines of their clothing. The women returned to carrying embroidered handbags which became known as reticules or redicules2, these were essentially a throw-back to the small purse3 - just big enough to carry a handkerchief, some make-up, a fan, a dance card and some perfume. Men by this time were becoming more and more reliant on pockets which were by then being made as an integral part of their garments.

In 19th Century Victorian England the handbag came of age. They were made of all manner of materials and decorated to co-ordinate with the dresses of the day. They also began to appear in a variety of shapes and sizes, from the heavily embroidered carpet bag, as immortalised in the film Mary Poppins, to the more delicate woven silk clutch bag. They were decorated lavishly with embroidery, beads, ribbons, or anything really, and instructions for personalising them appeared in the magazines of the day.

The carpet bag was not only the standard luggage of nannies in the 19th Century, but was more likely to be identified with the carpetbaggers of the newly re-United States of America. The carpetbaggers were essentially opportunistic entrepreneurs who travelled light with a bag made from two pieces of carpet stitched together. They toured the country, particularly the South, in search of advantageous business or political opportunities, and became synonymous with ruthless, cutthroat tactics.

By the turn of the 20th Century women could not leave home without their handbag to carry their essentials. The bags continued to be made in a range of fabrics including metal and latterly plastic, and became even more flamboyant in colour and design.

In the 1920s and again in the 1950s the handbag became a true fashion statement. The emergence of fashion houses like Chanel and Louis Vuitton gave the humble handbag the chic accessory status it has today.

The 1980s brought the rebirth of the pocket on a belt with the new bum bags4. These are made from durable nylon and include zips and velcro, but are essentially what women were wearing under their skirts in the 17th Century. The new improved bum bag gained favour with both men and women, and has proved useful for the likes of nurses to carry their essential little bits and pieces. Bum bags are a secure way to transport your valuables and can still be seen today around busy towns, at popular holiday resorts, and being used by climbers or walkers5 throughout the world.

Depending on your budget, you can purchase a handbag from £3.00 to £3,000, and of course there is always the option of making your own. It has been said that a woman's handbag is a self-contained lost and found department and this appears to be a good enough description. The contents of women's handbags vary greatly, but they usually contain, purse, mobile phone, keys, perfume, make-up, hairbrush, sanitary products, diary, pen, stamp(s), hankies, sweeties, well, you get the picture.

This is probably the right juncture to bring up some of the many dangers of handbags. Firstly there is the obvious tripping risk. When handbags are placed on the floor around a desk, table, or indeed a dance floor, they have been known, for reasons which remain unclear, to cause accidents by somehow becoming entangled around the feet of an innocent passerby.

The second danger involves overloading your bag. When carrying an overly heavy bag, care should be taken with weight distribution and the normal rules for carrying heavy objects applies. Keep the bag close to your body, and do not sling it over your shoulder - this will result in poor posture which can cause long term neck or back pain.

The third danger is more of a third party thing. A handbag can make a very effective weapon. Usually the handbag can be swung to good effect using the weight of the assorted irregular shaped articles concealed within to cause maximum damage.

The fourth danger is that the carrier may become the victim of thieves. Since handbags were first commonly carried in the 17th Century they have drawn the attention of 'cut purses', today the thieves are known as handbag snatchers. Remember, however precious the contents of your handbag are, there is nothing more precious than your life, do not attempt to fight for your bag.

The last danger is the unexpected. Handbags can and will continue to be used to conceal all manner of things, so extreme caution should always be taken when approaching an unattended bag. All being well you will only encounter a lost bag, but they have been known to contain stolen property, the family jewels, abandoned babies, government secrets and even a bomb, so if in any doubt just contact the authorities and expect the unexpected.

Some famous handbag carriers include Queen Elizabeth II, Margaret Thatcher and Tinky-Winky6. Apparently Princess Anne hit Emlyn Hughes with her handbag on a Question of Sport because he insisted on manhandling her each time they answered a question correctly. However, the most famous handbag in literature has to be the one which contained the baby Jack/Earnest in Oscar Wilde's The Importance of Being Earnest, that was of course a Handbaaaaag!7

While footballers don't generally carry handbags per se, they are known for having handbag moments. The highly dramatic posturing which occur when some perceived injustice happens on the pitch is known as 'handbags'. This is possibly because in a display of machismo they attempt to square off waving their arms around aggressively, all the while depending on the other players 'holding them back', or perhaps 'holding their handbag' while they sort the matter out man-to-man.

The point of this entry was to bring us back to the beginning with the biggest comeback of all time, the man bag.

Yes, from 3000 BC to the 17th Century men carried their handbags with pride, and now they have rediscovered their usefulness. Initially the bags inched their way back disguised as sports bags, soft leather briefcases, laptop bags and even plastic carrier bags, but the advantages of carrying a man bag was never really buried too deeply. Like a Phoenix rising from the flames, the man bag has returned with some serious style variations, but the most favoured style has emerged as the messenger or courier type bag. This is usually made from canvas or leather, is top-loading and worn satchel style across the body, or over the shoulder. Some famous man bag carriers are David Beckham, Chewbacca, and even Liam Gallagher is reported to own one. There is also, for the record, an h2g2 researcher who admits to carrying an ex-NATO canvas medics bag, a sort of man bag with a purpose.

1Largely due to the published thoughts of a certain tennis player of some note.2Literally meaning ridiculously small.3The handbag reached USA in the late 1800s, and is still known today as a purse.4Known as fanny packs in the USA.5Including at least one h2g2 researcher.6While Tinky-Winky is in fact male, it is most definitely a handbag he carries - not a man bag.7As pronounced by Edith Evans in her portrayal of Lady Bracknell.