Roulette - the Gambling Game Content from the guide to life, the universe and everything 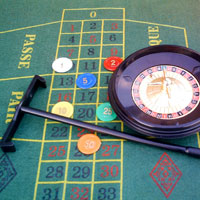 Roulette, the scourge of Robert Redford in The Sting, and many more gamblers besides, has always attracted those willing to bet high, and receive payouts even higher. This is, of course, only half the truth - roulette is unofficially claimed by casinos to make them the highest profits of all, due to human superstitions such as 'Lucky 9s', 'Unlucky 13s', and the uncanny proven nature of various minds in the same room to pick the same numbers.

The premise is simple: A circular wheel is free-mounted horizontally on bearings and divided into 37 slots, numbered 0 to 36 (38 slots, including a 00 slot, in the US). Each number is coloured either red or black, except the 0 which is coloured green (in the US, the 00 is also coloured green). The colours are not alternated from number to number, but all roulette wheels follow the same colour distribution, which was allegedly created at random. A ball is spun round the circumference of the spinning wheel and allowed to settle into one of the slots. Players bet on which one this will be.

The large part of the betting cloth is taken up by the numbers on the roulette wheel, in a 12x3 grid of squares, each in their appropriate colour. The left hand side of the cloth is dedicated to bets on Dozens, Red/Black1, High/Low and Odd/Even. Bets may be laid as follows:

Anyone with an ounce of mathematical reasoning will realise that all these bets are in fact exactly the same; no one bet will pay out more or less than any other over a period of time. This should, to any rational thinker, nullify one myth straight away: without cheating, there is no way to 'beat' a roulette table in the long term. This should then beg the question...

So, Where Does My Money Go?

Obviously roulette wheels make a profit for the casino; they wouldn't be there if they didn't. Most of the money lands for the casino when the number 0 (or 00) rolls in. For while it is possible to bet on these numbers individually, very few people do, preferring the bets that pay out lower dividends more often. The 0, additionally, does not fall into any of the categories in the table above, other than the single Number4. When all this is mathematically applied, the theoretical House Edge is 2.7% (5.3% on a US wheel). However, as mentioned in the introduction, many casinos reckon on a much higher profit through human failings, such as 'lucky' and 'unlucky' numbers, and people's insistence on backing numbers that are on a 'streak'. Remember the gambler's fallacy, however: if a number has just come up, the chances it will do so are exactly the same next time. This is unless you have a faulty wheel, however...

An interesting subject to mention in passing...

Roulette, more so than any other pastime, has been home to different varieties of fraudulent endeavour in the past. The most primitive form of cheating is to tilt the wheel so that it favours certain numbers more often. This, in fact, is the origin of the term 'belly-joint', meaning an unfair or disreputable game, from the times when the croupier's belly was used to nudge the wheel into position. Today's roulette wheels are mostly free-mounted and weighted around the edge, meaning they are kept on a horizontal plane by their own gyroscopic tendencies. Wheel irregularities have also been created in 'basement' casinos by strategic use of magnets, or even by making the slot-dividers in the wheel either square-tipped or round-tipped, to 'bounce' the ball into a favoured position.

Roulette cheats have also been caught using computers, aiming to predict the most likely outcomes once the ball has been inserted into the wheel. Any sort of calculating device tends to be banned from modern casino tables, in order to discourage both this sort of behaviour and counting systems in card games.

How Not to Show Yourself Up in the Casino

Most casinos in the UK and the US use unmarked coloured chips, all carrying the same value (the value of each is dependent on the maximum and minimum stakes for the table); each colour can be 'cashed in' by a single player. This is purely for the player's convenience; if you are scattering Squares and Splits all over the cloth, it helps to be able to identify your own bet. If there are no more colours available, you can still make bets with the house cash chips, although check the table minimum and maximum before you do. French tables differ in that you lay cash-valued chips only as bets; this tends to discourage punters from laying too many bets.

As mentioned above, it doesn't matter whether you bet in small amounts or large, on Numbers, Splits, Streets or whatever; the amount of money you win over time will be exactly the same. Most gamblers prefer to scatter their money widely to increase their chances of winning something; the fact that it is at greatly reduced odds does not seem to matter. The keynote is to take the game at your own pace, and not be harried into betting more than you want by extravagant punters at the same table, or by the large group of your friends standing behind you who are too cowardly to risk their own money.

Roulette tends to attract disciples of betting systems, the most simplest being the 'Martingale', whereby you double your basic bet after every loss; as a result, you theoretically turn a profit every time you win. There are innumerable variants on the Martingale, using different quotients and multipliers, but ultimately they all amount to the same thing - keep increasing your bet until you win. These systems should be avoided at all costs:

In the US and France, it is virtually mandatory to tip your croupier after a big win. No such rules apply in the UK, thanks to the 1961 Betting Act, but politeness and friendliness are always appreciated, and will certainly see you welcomed to the table next time.

1Often, the Red and Black boxes are designated not with words, but with a diamond of the appropriate colour.2If the odds are, say 35:1, and you bet £1, then you receive your stake back plus an extra £35 winnings.3OK, this isn't a very cool name. Obviously the gambling fraternity are yet to come up with anything better.4This is not strictly true - most casinos will allow a 'Split' bet between 0 and 1, 2 or 3, but this does virtually nothing to diminish the house edge.