The Elephant Content from the guide to life, the universe and everything 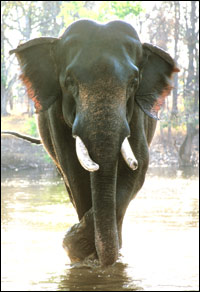 The elephant is a mammal.

Often heralded as among the smartest of mammals by the scientific community for their complex social groups and deep emotions, elephants are distinguished by their four legs with five toes each; thick, almost hairless skin; and a remarkable prehensile trunk, extending their nose to several feet away from their face. The elephant also has upper incisors that form long curved tusks, which are made of a substance called ivory. They are also among the few animals whose legs bend the same way as humans'.

The word elephant has both Greek and Latin origins. Elephas, the scientific genus name of the elephant, comes from the Greek word elephos, which represents an antlered beast or stag. The Latin root is divided into two words; ele means arch and phant means huge.

What Was That? Two Different Types?

The other sort of elephant, the elephant of south-central Asia (often referred to as just the Asian elephant, as this is much shorter) has smaller ears1 than its African cousin, and has the scientific name Elephas maximus. They are found in Bangladesh, Sri Lanka, Burma, Thailand, Cambodia, Laos, Vietnam, China (extinct in the wild), Malaysia, Indonesia, Borneo, and India. Asian elephants number approximately 38,000 to 51,000 in the wild, and are considered endangered.

Both belong to the order Proboscidia, and are the largest land animals now in existence.

The trunk of an elephant is one its most interesting features. It is an extremely flexible muscular organ, with over 100,000 different muscles. The trunk represents the nose and the upper lip of the animal, with nostrils running through its full length. As part of the lips, the trunk is extremely sensitive, and has a very fine sense of touch. As smell is one of the elephant's primary sensory inputs, movable nostrils are extremely handy.

At the first sign of danger, an elephant will raise its trunk to smell for a threat. The trunk can also be wrapped around objects, enabling the elephant to grip objects, or even to throw them. To drink, an elephant fills its trunk with water, and then proceeds to squirt the water into its mouth, eliminating any need to bend down and make itself vulnerable to predators. (Not that the elephant runs a risk of being attacked. Only very young or very sick elephants will ever be attacked, as the sheer size of the beast makes it difficult prey.) An average elephant's trunk can hold four litres of water. The trunk can be used as a snorkel, a water holder, or a showerhead, depending on what is needed. Elephants are often portrayed making a loud noise through their trunk. This action, referred to as trumpeting2, creates a large vibration in their nasal cavity, and emits a deafening blast. This noise can express joy, anger, sadness, or warn elephants in the area of danger.

The African elephant has two fingers of flesh on the tip of its trunk that it uses to grab objects. The Asian elephant only has one of these fingers, and thus can only use this part of the trunk to scoop up objects.

Elephants are best known by many people in the world for their large tusks. Both sexes of African elephants have tusks, but in Asian elephants, only the males have tusks that protrude beyond the lips. The tusks are essentially oversized upper incisors. At birth, the tusks present are only milk teeth, which fall out after around one year. The permanent tusks begin to protrude at the age of two or three, and will continue to grow throughout the elephant's life.

Many elephants are killed for their tusks, which are made of a material called ivory. Ivory is highly prized on the earth for making trinkets, ornaments, jewellery, and other useless items. The elephant is usually killed because one-fourth of the tusk is hidden within the tooth's socket, and cannot be removed unless the animal is killed.

The ears of an elephant are made up of a cartilaginous sheet to which relatively thin skin is attached. They serve several important functions. Because of the low surface to volume ratio of an elephant's body, an elephant will overheat rapidly if a cooling method is not employed. An elephant's ears, being riddled with hundreds of veins and capillaries, when exposed to cooler outside air, allow much faster heat loss, helping the elephant to regulate its internal temperature. The ears also give elephants an amazing infrasound3 capability, for long-range communication in low frequencies.

Elephants have a very distinct social structure. Elephant families are ruled by a matriarch (an older, more experienced female) and generally consist of her female offspring and their young. A basic family unit can consist of as few as six to as many as twenty elephants. When the matriarch dies, one of the oldest offspring takes her spot, and the herd continues. As the younger elephants in a herd grow older, they will begin to wander more, and spend time on the outskirts of the group. Males will eventually leave the group altogether, joining with other males of different ages in what is called a 'band of bulls'. These bulls will roam, attempting to find mates. Of course, of the two, the female groups are the more stable social unit. Even when groups split apart, the females will maintain close association and will even greet each other after months of separation.

Humans often seem to have preconceived notions that they are the only ones who experience complex emotions such as joy and grief; however, elephants have been known to display these feelings openly. Mother elephants have been recorded grieving over their stillborn babies for days. One such mother was described: 'slumped, appeared to be crying, while trying to revive her baby'. Elephants who lose a herd member will leave, and soon return to mourn, and pay homage to the lost friend. Even when the body is long gone, an elephant will stop dead in its tracks when it returns to a place where a fellow elephant died. Elephants exhibit joy through playfulness, trumpeting, or a greeting ceremony when meeting with other elephants.

Elephants have a gestation period of 22 months - the longest for any mammal. Calves are born throughout the year, but the majority of births take place during the rainy season when vegetation is at its most plentiful. Baby elephants are aproximately 90cm tall when born, and are covered in a fine black hair that will fall out as the animal matures. The interval between births, two-and-a-half to four years, gives the current baby time to learn the ropes before another is born. After weaning has ended, the elephant begins the adolescent stage, where sexual maturity is achieved and important social ties are developed. At the adult stage, elephants encounter many of the same problems humans do in older age, including age-related illness (cardiovascular disease, arthritis, etc). Elephants can live to be over 70 years old, and have children until about 50.

What Was That? THREE Different Types?!

New evidence has recently come to light that not all African elephants are of the same species. When DNA identification systems were put in place to trace illegal poached ivory, scientists discovered that some of the 'African' elephants were actually the new, third species. Dubbed the forest elephant, Loxodonta cyclotis is found in the equatorial forests of central and western Africa. The two species are quite far apart from each other genetically, as different as lions are from tigers. The difference between the two is more than half as big as the difference between African elephants and Asian elephants4.

Forest elephants are much smaller than their Savannah relatives, only about 2.4 metres tall. Their ears are rounded and their tusks are straight instead of curved5. The ivory of the Forest Elephant has a pink tinge to it, the lower jaw is longer, and they have darker skin than Savannah elephants.

The Role of an Elephant

Elephant dung, as humorous as it sounds, is important to the environment. It disperses seeds, and is often carried underground by dung beetles and termites. This underground dung fertilizes the soil.

Elephants do eat a lot of vegetation, and so have sometimes been deemed destructors of the environment. Mass killings of family herds have become a common practice in both Asia and Africa. Many humans overlook the importance of the elephant, and deem it a destroyer of habitats. There are a few viable solutions to this problem, aside from mass murder. Translocation is one option, but the lack of funds and suitable places to move the elephants makes it difficult to implement. The second method, birth control, is being tested, but has not been made mainstream because of cost. Many ecologists believe, however, that man is attempting to avert a disaster that will never occur. Checks and balances in the ecosystem have worked for thousands of years in the past, and so will most likely work in the future.

As humans learn more about the elephant, one thing becomes clear: these gentle giants have much in common with humans, and are an indispensable part of the Earth's biosphere.

1...coincidentally shaped a bit like India.2To hear an elephant trumpeting, try the referenced link.3Infrasound is the range of sounds below the level of human hearing. It is at the opposite end of the scale from the more familliar ultrasound.4African and Asian elephants are actually different genera, the names Loxodonta and Elephas denoting genus, while africana, cyclotis and maximus are species names.5Although being impaled on either type is still highly discouraged.