Spell Checkers - A Warning Content from the guide to life, the universe and everything 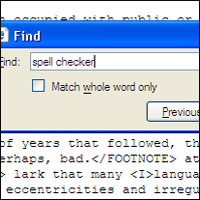 A man occupied with public or other important business cannot, and need not, attend to spelling.
–  Napoleon Bonaparte

Once upon a time, a concept known as communication was born. This was considered by some to be a bad idea, coming as it did shortly before the invention of a concept known as marriage. Over the thousands of years that followed, the human race became so good1 at this communication lark that many languages now exist, each with its own little eccentricities and irregular verb endings. The English language, in particular, is so full of illogical and peculiar words that it took until the middle of the 18th Century for someone to collect them all in two excessively large and rather expensive volumes. It comes as no surprise, then, that humans have since turned to machines to do their dirty work when it comes to such things as spelling, punctuation and grammar. Unfortunately, these machines are so logical and lacking in a good knowledge of peculiar words that they must be taught by humans exactly how to do a job that the humans themselves aren't entirely comfortable with doing. In a world where many people now use the word 'like' in order to avoid thinking of something more complicated to say, or better still avoid thinking altogether, this presents something of a problem.

In order to check your spelling, a computer relies upon a list of 'correct' words that it compares to whatever you actually happen to type. If a word is not in the list, it's wrong, regardless of what anyone with actual knowledge of the language in question might think2. You may have noticed this phenomenon when typing the names of people, places, medical conditions, and in fact most words that aren't commonly used by preschool children. You may also have noticed that your computer doesn't mind what you write provided you keep to this array of nice, simple words. This can result in sentences that would look more at home on a Scrabble board:

Run the above through the Microsoft Word spell checker and it won't make a single noise. It may even provide you with the statistic that your work is at the level of a ten year-old American school kid. While this may be quite believable3, it is also greatly unhelpful.

Some common mistakes missed by spell checkers involve homophones4 such as:

Also, a spell checker will often omit to correct you when you wrongly use words with different but similar sounds. Examples include omit/emit, effect/affect, lose/loose, moot/mute, elicit/illicit and so forth/fourth6. Unless your spell checker is psychic, it's best to learn the difference between such words yourself.

One exception to the above is the wonderful moment when your computer decides to change the word list it's using to Belgian  Dutch, Luxembourgish Luxembourgian or American English (whatever that might be). In this case, nothing you type will ever be correct, and it may be quicker to sell your computer and buy a 'pencil', some 'paper' and perhaps a 'dictionary'. If anyone asks, just say your printer broke.

Another big problem is those words which are slightly different from those that you intended to type, but which are in fact perfectly good words in their own right. For instance:

I used my spell checkers sop much, I only occasionally makes as mistakes.

All the above mistakes are easily made with just a slip of the finger and just as easily missed by those relying upon a spell checker to pick them up7.

Not only does the average spell checker not care how you spell your words, but it also shows nothing but pure apathy for the order you put them in. For instance:

Americans would to like the mocking we apologise for.

Once again, your spell checker will not utter a single peep when asked to check such rubbish. In fact, the average spell checker doesn't actually understand a single word you type – it just uses a series of rigid rules to decide whether your writing passes muster or not. As a result, spell checkers usually miss even the simplest of errors, including the horrific 'How to spell check my work?' They may even decide that perfectly good grammar should be altered just to please an obscure algorithm8.

So what if spell checkers aren't all that good? Here's what: a study by Galletta et al at the University of Pittsburgh showed that, rather than helping students who score poorly at language tests to attain a higher standard, spell checkers simply drag everyone down to the same level. While a spell checker will generally produce a positive result when looking for obvious mistakes, they miss a number of homophones and similarly-spelled words, and have a habit of tricking users into changing correct words.

Unfortunately, as the study points out, our level of trust in any one spell checker is determined by its ability to point out the bleeding obvious, and not how thorough it is. What is really needed is some degree of doubt in the spell checker's ability, which the study suggests might be attained by putting warning labels on the boxes. A better solution would be to use the spell checker as an aid rather than a crutch by taking the time to proof read your own work, but this might involve some actual effort and is thus probably a bad idea.

The English have no respect for their language, and will not teach their children to speak it. They spell it so abominably that no man can teach himself what it sounds like. It is impossible for an Englishman to open his mouth without making some other Englishman hate or despise him. German and Spanish are accessible to foreigners: English is not accessible even to Englishmen.
–  from Pygmalion by George Bernard Shaw

1Or, perhaps, bad.2Some spell checkers push this point by forcing you to conform or else suffer a squiggly red line under each and every misspelled word. This can be avoided by manually 'adding' the words, but this process can be flawed unless the writer uses a dictionary to check the spelling of the words they've added, in which case the whole point of having a spell checker in the first place becomes questionable.3Apologies to any American readers who have managed to get this far.4Words that share the same sound.5No, really.6Alright, observant readers will point out that this last pair are not just similar-sounding but are actually homophones, but give a guy a break/brake.7For those who lack the will to read on, the solution is to not be so bloody lazy.8Any wags suggesting that spell checkers are definitive and it is reality that is flawed are welcome to go fetch their coats.