Scrabble - the Word Game Content from the guide to life, the universe and everything 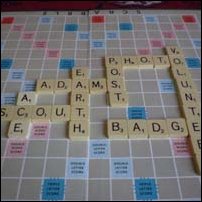 The game of Scrabble requires its players to form words on a 15 by 15 grid by arranging 100 lettered tiles in a crossword style1. Alfred Mosher Butts, an architect2, invented it in 1938, as he thought that word games lacked popular appeal due to the lack of a competitive scoring system. He originally created a game called 'Lexico', but having altered the rules and reformed the game, he changed the name to 'Criss-Crosswords'. Unfortunately, it was not very successful, and Butts failed to sell the game to a games manufacturer.

When lawyer James Burnot bought the rights to the game in 1948 it finally became 'Scrabble'. As well as renaming it, Burnot adjusted the rules and the board, and engaged in successful marketing of the revised game. Today, Scrabble has become extremely successful, with about 33 million people playing the game regularly in North America alone. The America-based National Scrabble Association boasts more than 10,000 members, while there are Scrabble clubs and associations as far afield as Nigeria, Singapore, New Zealand, Bahrain and the UK.

A player wins a game of Scrabble by accumulating the most points before the game ends.

You receive points by placing words from your random selection of seven tiles on to the board, from which you derive a score based on the individual letters. You can expand your point-winning potential by:

The game ends when a player has used all of the tiles on his rack with none left to draw from the central pool. If this does not occur, the game continues until all players can no longer play, ie all players pass their turn because they cannot form a word with their remaining tiles. Sometimes, the game simply ends when all players agree that the game is over.

From there, players may add one or more letters interconnecting with or adjacent to those already on the board. These letters must form new words or modify an existing one. You get points for every letter you used. Where you modify an existing word, you can score for tiles you didn't place on the board. The rules for creating words are as follows:

You may also forfeit your turn to exchange some or all of your tiles. You do this by replacing a number of your existing tiles with the same quantity of new tiles (provided that there are more than seven tiles left to draw) from the draw bag.

If there is any doubt of whether a word exists, a player may challenge that word before the next player starts his turn. The players should look up the word in a specific dictionary agreed on before the game began. If it is not a recognised word, the player challenged loses his or her turn, removes the offending tiles from the board, and receives zero points. If it is a word, the challenger loses his or her next turn.

You may play outdated, slang, colloquial and archaic words - if they appear in your dictionary of choice. You can also play foreign words where they have common usage in your own language - and, again, appear in your dictionary of choice. However, you cannot play abbreviations, suffixes and prefixes, proper nouns or words that need additional punctuation (such as hyphens and apostrophes). Of course, many dictionaries do not include all verb endings, pluralisation and tenses. Normal usage of these is acceptable, but the players should read the introduction to the dictionary to understand how it explains this or abbreviates different forms of a word.

Scrabble scoring is based on a system of points. The game assigns a specific value to each letter, normally printed on the corner of each tile. A player receives this number of points for placing the letter as part of an unchallenged word.

Butts knew that some letters appeared more often than others did, so he decided to come up with a system to find out which letters appeared most and which appeared least. He counted letter usage in newspapers, deciding on a number and value for tiles depending on the frequency with which they appeared. He eventually came up with this model:

A player determines the score of a complete word by adding up the value of all of the individual letters. For example, the word MUG is worth six points, while the word RAISE is worth five points. The shorter word is worth more because it uses less common letters than the longer word.

Additionally, there are dozens of 'Premium Squares' that multiply the value of a letter or word when you place tiles across it. There are four types of Premium Squares:

Good players use these squares in combination to score substantial points. Placing a 'Q' on a triple letter score will earn you 30 points alone.

Other rules about scoring include:

The whole of the previous section relates to the English edition of Scrabble. Non-English languages place different emphasis on different letters in word construction and, indeed, even use completely different letters. For example, the German edition of Scrabble values a Y at 10 points, while a Z only scores a meagre 3 points. The set includes tiles for Ä - worth 6 points, Ö - worth 8 points and Ü - worth 5 points.

You can find many tips for playing Scrabble. Indeed, people have written whole books on the subject.

Here are just a few hints you might consider:

These are some of the variations you can play to provide an additional challenge for experienced players:

1A Super Scrabble variant exists with a 21 x 21 board, 200 letter tiles and Quadruple Scoring spaces.2Butts' architectural credits include a housing development on Staten Island, a Stanfordville library and a small number of elegant country houses in Connecticut.3Scrabble comes in a variety of versions, including standard, deluxe - with wooden components, a velvet-style tile bag and swivel board-mount, and specials - like the pink standard set for Breakthrough breast cancer or The Simpsons Scrabble, which adds additional rules that allow you to help yourself or hinder your opponents.4Which can be decided in a number of ways. You can simply flip a coin, draw straws or roll dice. You can also each draw tiles, and the player with the tile closest to the beginning of the alphabet goes first.5The vital force inherent in all things, according to certain avenues of Chinese thought.