How To Get A Bingo In Scrabble Content from the guide to life, the universe and everything 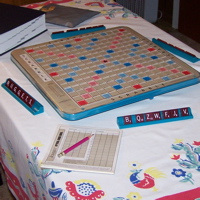 You love being with your family over Christmas, but you hate the post-turkey tension when the board games come out. Well, actually, most of them aren't too bad, but when your brother gets you playing Scrabble, he makes you feel like a fool. And the loser washes up; you wish you'd never started that silly tradition. He seems to be the king of anagrams, and just when you feel you have a chance he puts some damn long word down for a 'bingo'. Every time. This is a close game, but you can see him scheming. He shifts his tiles about a bit and ponders the situation. Here it comes...

J-O-U-S-T-E-D. To add insult to injury, he's also managed to hit a 'double letter score' square with the D, and the U sits on a double word score. That's 34 points for the word, and a bonus of 50 for the bingo. 84 points1. Your head rings with unutterable curses.

Your brother puts his hands behind his head and leans back in his chair. He breaks into a broad, smug grin; he knows he's got you. Again.

If a player manages to play all of his/her tiles from a full rack at once in Scrabble, it is known as a bingo (or, sometimes, a bonus). These are usually seven or eight letters long (the latter utilising a tile already on the board), but longer words are possible. Beginners often find bingos elusive, but you don't have to be a Countdown fan to find them. A little luck is helpful, certainly; but learning what to look for is an important Scrabble skill.

Why Are They Important?

Letters that occur frequently in Scrabble, such as E, R, S and L, are low-scoring at just a point each. As letters become less common (and therefore harder to play) they become worth more points - J and X are worth eight points each, and Q and Z ten. To score more heavily, it makes sense to put the higher-scoring letters on double or triple letter score squares, but without them scoring opportunities might appear limited. For example, with a good mix of letters we might be able to make QUENCH, which is worth 20 points without any letters on bonus squares - a word of the same length using just common letters, such as RETAIL, would be worth only six.

However, Scrabble also rewards good anagramming skills. If you manage to play all your tiles in one go, you get a bonus of 50 points added onto your score for the word. There are estimated to be around 54,000 seven- and eight-letter words in the Official Scrabble Player's Dictionary, the OSPD, so bingos are not as unlikely as you may think. And if you're playing among friends and family, one bingo in a game can make all the difference.

The two highest-scoring seven letter words are SQUEEZY and QUARTZY, both of which score 78 points excluding any bonus squares; in the right place, over a triple word and double letter score, either can be worth 164. Eight-letter bingos can, in theory, stretch over two triple word score squares; BEZIQUES and CAZIQUES, starting and finishing on triple words, would score 392 each!

How To Find Bingos

Really serious Scrabble players memorise as many seven- and eight- letter words as they can, but this takes a huge amount of time and commitment. It has been estimated that the average English speaker knows about 10-20,000 words of the 616,000 in the Oxford English Dictionary, and occasional players will have more interesting bedtime reading than the OED2. Another technique used by professional Scrabble players4 is to memorise alphabetical racks - learning that AEINRST gives RETINAS, for example - and then learning what happens when you add any given letter to the rack for an eight-letter bingo (adding A gives you SEATRAIN, B - BANISTER, C - SCANTIER and so on). Most casual, or 'kitchen' players, don't have the time or inclination to learn by rote, so here are some useful tips for novices.

Perhaps the most important thing to do is to move your tiles regularly on your rack. Looking at STEGARO may not look promising, but with a bit of shuffling you might find the word TOE leaps out, and the word RAGS, leaving you a bingo - TOERAGS.

As you do, have a look to see if there are any obvious prefixes or suffixes among your letters. It's much easier to spot a four-letter word than a seven-letter one, and if you can isolate an -ING, -ANE, -IST or PRO- you might just find the other letters magically form the rest of the word.

Some letters are highly-prized, and some players reckon you should keep them in the hope of playing a bingo. The two most important are 'S' and the 'blank' tiles, both of which are very useful for the bingo-maker.

Finally, you can try to increase your chances of getting a bingo on the next go. This can be a useful tactic if you're a long way behind and need one very big score to catch up, but for beginners can be a risky tactic. First of all, remember RETAINS - you need to retain any letters you have in this word, as they are the most commonly used in bingos. If you have more than one of any of them, these can be safely played. You also need to have a good mix of vowels and consonants. Play as many of the remaining letters as you can; any tiles that might be difficult to incorporate - the higher scoring J, X, Q and Z tiles - should be played if possible, even if they are on non-bonus-scoring squares. Now cross your fingers as you replace them!

Got A Bingo? Then Wait!

Before you play, take a look at your word and see if you can spot any anagrams of it. This is tricky - finding one is hard enough - but if you can spot that KITCHEN is also THICKEN and SENATOR is both ATONERS and TREASON, you'll probably be able to squeeze extra points out of it. In KITCHEN, the K is worth five and the C three; all the other letters are worth a solitary point. If there is a double or triple letter score available that you can move the K onto, you'll score extra points. Although all the letters in SENATOR are worth one point, if you're laying the S at the end of a word to get your bingo on the board a second look can still be useful. By spotting the variations of the bingo, you could manoeuvre the letters over more bonus squares. So try to quell the excitement of your bingo and take a moment to ensure you're scoring as many points from it as you possibly can.

It takes practice, but by using the tips in this Entry to make your life easier - well, you never know how events might unfold...

Your turn. He's a long way ahead now, and you're desperate for a good one to get back in it. Your rack stares blankly back at you. LNUYSTU. Horrible. You shuffle the tiles. Nothing. You pluck out a suffix. Still nothing. But when you spot a prefix as well...

You lay down a few tiles next to his J, and pause. J-U-S-T. 'Wow, 12 points with the double letter score', he laughs, picking up the score pad. You pick up your U and N and add the prefix; the U landing on the triple word score in the top-left-hand corner. He looks almost impressed and leans forward to count your score.

U-N-J-U-S-T-L-Y. You nonchalantly mimic the position he was in a moment before. '221', you grin, smugly. 'The marigolds are under the sink.'

1Yes, we know, smartypants. To put all seven down, he'd have had to add one of his letters to a word already on the board, so he would've scored even more than that. Don't you think this situation is contrived enough without getting even more complicated?2The words themselves are nice enough, but the plot is rather dull3.3However, we would not go so far as Edmund Blackadder, who described Dr Johnson's dictionary as 'the most pointless book since How To Learn French was translated into French.'4No, really.5Five.6REALIST, TAILERS, SALTIER, SLATIER, RETAILS.