Bingo For Beginners Content from the guide to life, the universe and everything 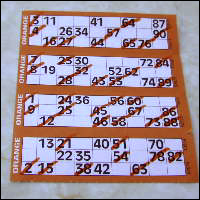 Bingo is a game played all over the world. Its popularity stems from its simplicity, the social atmosphere that surrounds it, and of course, the chance to win a prize. It is played in many places; from big, professional halls with flashing lights and electronics, to village halls and rest homes. Despite recent press campaigns in Britain, it has a reputation for being a game for those in the twilight years of life. Broadly speaking, this is true.

The basic rules are that numbers from 1 - 90 (in Britain) are drawn at random and called out in the order drawn. The players then mark each number off on their card as it is called. At the most basic end of the scale, the method of drawing the numbers may be plastic tablets taken from a bag, called out, and placed on a master number card for checking. Alternatives include a drum or sphere full of numbered balls, or an electronic flashing screen that lights up numbers for the caller1 as they are called. Sooner or later, one player will complete a card in a 'line' or 'house', at which point the game stops, the card is checked2 against the caller's board, and, if the numbers have indeed all been called, the prize money is paid. Depending on where you play3, it may be just as simple or far more complex than this.

Many of the basic concepts vary regionally. It is impossible to produce a comprehensive list of every detail that a player might encounter; a big national hall in Leeds will play very differently and have a totally different atmosphere to an end-of-pier gaming area in Paignton. Internationally, the differences may be even more accentuated. However, these are the most likely variations that you might encounter in the British Isles.

The most common type of bingo ticket is one consisting of three rows and nine columns, each row having five numbers and each column one, two or three numbers. This means that a player can complete a 'line' by simply crossing off five numbers in any row on their card. The game can be played for any row ('any line' in technical parlance) or for any row specified by the caller (eg, 'bottom line' would require the claimant to have all five numbers on the bottom row to be called before they can win). An alternative, though not usually played with this type of ticket, is 'all four corners' where the player must have the number on the top-left, top-right, bottom-left and bottom-right of the ticket called to win4.

Another common ticket, often found in seaside resorts and North America, is a square ticket divided into five rows and five columns. either under the letters B-I-N-G-O5 or under five different colours. In this version, only numbers 1-75 are used. The advantage of this type of ticket is that the four corners are blatantly obvious and you can still play for the standard 'line' across the ticket, making it easy for players of all skills and experience. Games can be more varied by making players play for a 4x4 square, cross or indeed any shape you can easily explain.

The 'full house' is always the first player to have all the numbers from their ticket called. In the case that two people call 'house' on the same number, the prize money is shared.

It is important to ensure that you are clear on the rules, particularly what constitutes a 'line', before the game starts. Callers will be sympathetic to new players and are happy to explain the criteria for winning. It is important to note that most halls will only let you win if the number you claim on has just been called; if the next number is called before you shout 'line' or 'house', your claim will be refused. Don't worry too much about what you shout to indicate you have filled a line or house; on your first visit you may be surprised at the strange noises and grunting calls people make to claim their prize! As long as you call loudly, you won't miss out. Holding your ticket in the air helps to identify where you are so that the checker can find you more easily.

There are other variations from house to house. For instance, you are sometimes sold tickets before each game and sometimes you buy a book of tickets for a series of games. And if you are playing in a hall that is part of a chain, you may find there is a 'national' game where the prize is tens of thousands of pounds6.

A quicker variation of the game is 'Irish Bingo', so named, perhaps rather disrespectfully, because it is played backwards. Each player has one ticket and begins the game standing up; the numbers are called and, if one appears on a player's ticket, that player must sit down. The last player standing wins. This can be played at anything from a child's birthday party (for a prize), to a drinking game7 (where the winner has to drink or do a forfeit).

See also Bingo calling for Beginners for information on number nicknames and how to be a caller, or Cow Patty Bingo for another, more unusual variation on the theme.

1The person who calls the numbers out.2A dedicated 'checker' is sometimes employed purely to shout out numbers for the caller to check.3And how serious the opposition is.4This is more complex than it sounds for novice players, as it is often not obvious which numbers fit the criteria.5The letter 'B' covers numbers 1-15, the 'I' numbers 16-30 and so on.6Of course, your odds are vastly reduced as you are playing against the whole country.7Admittedly hard to play towards the end of a session.