Coin Flipping - Conflict Resolution Content from the guide to life, the universe and everything 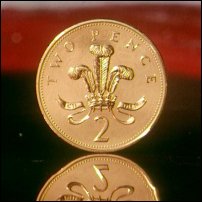 The everyday banality of settling disputes between two parties is well known to most people. One of the most popular methods of settling disputes is to leave the matter up to the gods of fate, the divine judgement of chance. Perhaps you and a cousin both crave that last piece of Grandma's famous banana cream pie? If you are willing to leave the matter to fate, this can be done by 'flipping a coin'.

To flip a coin, one simply assigns each party a face of the coin, thrusts aforementioned coin into the air and observes which side faces up when the coin has come to rest. There are endless variations on this. Most commonly, though, a medium-sized coin will be placed on the thumb which is bent downwards at the knuckle. The flipper will flick his thumb up, causing the coin to go spinning through the air. While it spins in the air, the other party calls out 'heads' or 'tails' (thereby 'calling it in the air'), indicating which face he is assigned, and which face he hopes will come up. The flipper will then catch the coin in the hand that did the flipping1. Without looking at the coin, he or she may then turn his palm upwards or smack his palm down on the back of the other hand, revealing the face of the coin designated as the 'winning' side and deciding once and for all who the piece of pie belongs to.

Why a coin? Well, for one, paper money doesn't flip easily. Other than that, coins have the benefit of being unbiased, standardised, familiar and easily accessible. There's a fair expectation that a standard coin won't be more likely to land on one side more than the other. There's also little chance that a flip will end up disputed. Coins have been known to land on their sides (the 'depth' of the coin, where the ridges are in certain coins), but that's relatively rare, and can easily be remedied by another flip. If a coin continues to land on its side, then that's just remarkable. It is unlikely that there will be genuine problems with a coin flip. In fact, you face a greater prospect of a disputed flip from a sore loser who demands a best two-out-of-three (then three-out-of-five, and so on) or who believes that your flip sequence was not by the books, and therefore worthy of a redo. Incidentally, if you're dealing with one of those kinds of people, it's a good idea to set out the ground rules very clearly before flipping.

There are two familiar outcomes to a flip of a coin. First is heads. In many coins, dating back to ancient Rome, there are the faces of some important figure on the front face of a coin, thus it is the 'heads' side. The other is the 'tails' side. There are of course, no tails engraved onto the bottom of a coin. Rather, since one end of a coin is a 'head', it follows that the other end would be the 'tail'. This side of a coin can have buildings, scenes, maps, phrases, designs, or anything, really. The Romans liked to have ships on the bottom of their coins, and would have called out Heads or Ships when flipping a coin. While 'Heads or Tails' may be the most common, the tails call can be replaced with any number of things, depending on the currency. Harps, beavers and digits are obverses in various parts of the world.

In the United States, a quarter (25 cents) is preferred for flipping. Its size makes it easy to flip into and grab out of the air. American thumbs are well calibrated to the quarter for flipping. A half-dollar (though they are hard to find in America) can be used for flipping, but they're heavy enough to hurt your thumb nail in the process. A dime and penny are so light that they're likely to spin out of control. A nickel is fine, if a little small for the job.

In the United Kingdom, a two or ten pence coin or even a one or two pound coin are recommended, though it's never really a great idea to toss around any amount of money which you may need to buy lunch.

In Canada, a 25 cent coin or a one-dollar coin are widely used for flipping.

In Ireland, which now uses the euro, the call is 'Heads or harps'. Irish coins up to about 1800 had a head on one side and a harp on the other. From 1800 to 1920, there was a head but no harp. Since 1920, there has been a harp but no head. But due to the globalisation of World Culture, the old 'heads or harps' call is dying out.

In Australia a ten or 20 cent piece is preferred, with a lyrebird or platypus being 'tails'. The local game of Two-Up also relies on some coin flipping.

In New Zealand, a lottery game uses a coin toss whereby if you match all six of your numbers, the coin is flipped to decide whether you win a cash jackpot or a bigger jackpot with luxury prizes.

In Euros, the 50 cent coin is perhaps most appropriate for flipping as it is about the right size, and is not so valuable that a wild flip into the gutty will be felt, financially.

In Germany, the local call is 'Kopf oder Zahl', which means Head or Number.

The desire to toss a coin in order to solve a problem is international. In all of these cases, a game of Paper-Rock-Scissors, or Roshambo, would work just as well, but it seems like a coin toss has more dignity to it (especially when villains in comic books do it, like 'Two-face'). Here are a few situations where a coin toss can be used:

1Some prefer to let the coin land and fall, with one face up, but in fact, that may lead to bias. If the coin lands on a flat surface and begins to roll or spin, it is slightly more likely for the side with less engraving (and therefore more metal) to end up facing down. The US penny and the Belgian euro have been accused of such bias.2...be careful what you flip for.