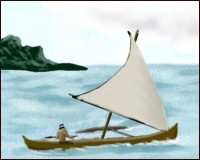 Polynesia is a group of islands comprising the majority of the land in the Pacific Ocean. Geographically, it is roughly defined by a triangle with points at New Zealand, Easter Island (Rapa Nui) and Hawaii which covers some 12 million square miles. Some well-known islands in Polynesian are Samoa, Tonga, New Zealand, Hawaii, Tahiti, and Easter Island. On the north west it is bordered by the region known as Micronesia, on the west by Melanesia, and on all other sides by open ocean. Polynesia is occupied by one of the most homogeneous racial groups in the world, the Polynesians.

The islands of Polynesia are of three types: volcanic basalt, limestone, and coral atolls. The three types produce significantly different environments that had a great impact on the first Polynesian settlers and the culture they developed. The rounded and worn volcanic islands tend to produce rich topsoil that collects in low crevices. These islands are well suited for agriculture but rarely support trees. Limestone islands tend to erode more slowly, so are composed of sharp cliffs and little topsoil. They tend to be properly suited for trees and produce ample wood products. Atolls are coral reefs built up enough to protrude from the sea. Little or nothing can grow on them with the exception of coconuts. On the whole, this situation makes it necessary for the residents of individual islands to trade products with their neighbours in order to survive.

The Polynesian people have a fascinating history and culture. Their colonisation of Polynesia counts as the most dramatic migration of a single group in the history of the world.

Polynesians originated in Taiwan or mainland China more than 6000 years ago, going on linguistic and genetic evidence1. By 1500 BC their use of agriculture had allowed them to spread to Indonesia and Melanesia, establishing shoreline colonies in lands already occupied by the native Melanesians2. This culture is referred to as Lapita, after the site at which it was first identified. Lapita spread to Fiji after 1500 BC, the farthest eastern extent of Melanesian peoples. By 1000 BC it had spread to Tonga and Samoa, lands previously uninhabited by any human culture. Ironically, although Lapita is best known from its distinctive pottery patterns, Polynesians stopped making pottery around 1 AD. From Samoa they spread again, this time to the Marquesas and Society Islands (now French Polynesia) around AD 300. Settlement quickly followed in Hawaii and Easter Island by AD 700, and in the Cooks, Australs, New Zealand, and all remaining habitable islands by 1100 AD.

One of the most important and interesting aspects of the study of Polynesia is transportation. Almost all of the lands occupied by Polynesians were uninhabited before their arrival, which was made possible by unprecedented advances in technology and knowledge of the sea. Although it was once thought that Polynesian colonisations were the result of accidental drift voyages, it is now generally accepted that they were major and deliberate affairs. They took place on huge double-hulled canoes. Two long canoe hulls (up to 90 feet long) would be placed from 3 to 7 feet apart with cross beams nailed across the gap. Then a massive wooden platform (up to 80x18 feet) would be placed across the whole structure. Up to 100 men, women, and children could travel on such a vessel, with their food, animals, and seeds stored below in the canoe hulls proper. Ovens were carried on the deck for cooking during the voyage. They could travel up to 2500 miles against the wind without landing. Travelling against the wind was the safest option, allowing a colonisation party, which felt it had no chance of reaching land, to simply drift back the way they came. Upon landing on a new island, a few individuals would be chosen to go back to the homeland to report their success.

Despite the vast size of the area the cultures of the various islands are remarkably homogeneous. Polynesian cultures tend to be highly stratified and hereditary. Stratification is based, among other things, on family ranking. In other words, the first son inherits all of the wealth and power, the second son gets nothing but a bit of respect. This forms the incentive for colonisation, since the only way a second son could rise above his older brother would be to travel to a new island and found a new settlement. They are also very strict and ritualised, and it is from this culture group that we get such words as tabu (taboo) meaning something forbidden and mana meaning spiritual power. There are four principal gods who are prevalent throughout Polynesia: Tangaroa, god of the sea, Tu, god of war, Rongo, god of horticulture, and Tane, god of the forest. All islands except Tonga and Samoa show some form of open-air temple with a raised platform, often topped with a stone or wooden statue. This form of idol reached its most magnificent form in the famous statues of Easter Island.

Polynesians grew a wide variety of crops including coconut, yam, taro, banana, breadfruit, and sweet potato. They also raised three food animals: chicken, dog, and pig. One of the key aspects of the survival of Polynesian culture on such widely spread small islands was long-distance trade. So important was this trade that the archaeological record actually contains evidence of societies collapsing or even going extinct when trade with nearby islands was cut off by various external factors. The 19th-Century ethnologist Samuel Marsden remarked, in a rather insulting comment comparing Polynesians to Jews, 'They will buy and sell anything they have got'.

One of the most striking aspects of the study of Polynesian culture is their example to modern societies of what not to do to the environment. Several Polynesian societies, most famously Easter Island and the Maori of New Zealand, actually exploited their native environments so badly that their culture could not be sustained and collapsed3. In a larger context, the overall degradation of Polynesia (including the extinction of as many as 6000 species of native birds) may have been a primary cause of the complete end of the all-important trade networks around 1500 AD. Environmental anthropologists such as Jared Diamond commonly point out Polynesia as an important example for us to understand if our own culture is to survive the dramatic damage it causes to the earth.

1Specifically based on the fact that Austronesian, of which Polynesian is a branch, has four main divisions and three of these occur only in Taiwan2Who arrived as much as 40,000 years ago3However it must be noted that this sort of self-destructive behaviour occurs in every period and throughout the world