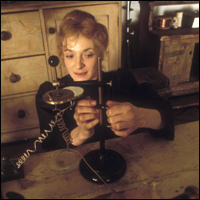 Each of us must work for our own improvement, and, at the same time, share a general responsibility for all humanity, our particular duty being to aid those to whom we think we can be most useful.
- Marie Curie

Marie Curie is one of the most celebrated female scientists having, with her husband, Pierre, discovered two elements, polonium and radium, and coined the term 'radioactivity'.

Born 7 November, 1867, Marya Sklodowska was brought up in Warsaw with her sisters and brothers, Zosia, Hela, Jozef and Bronya. Her parents were both teachers and they instilled in their children that education was the key to a good life. Unfortunately, her father lost his teaching job due to his patriotic views and her mother and sister Zosia died when she was young.

During the 1860s Poland was controlled by Czarist Russia, which banned women from education. Thus Marya was only expected to excel at school, where on graduating she received a gold medal and diploma, and not continue her studying further. However, Marya and her sister Bronya were determined to educate themselves further and thus undertook studies with a floating University. They then made a pact that Bronya would go to a foreign University and Marya would pay for her sister's education. Once she had finished, Bronya would pay for Marya to attend University.

To afford Bronya’s education Marya took a job as governess to the children of a sugar beet owner and in her spare time educated Polish peasants. Teaching Polish peasants was risky and if the Russian authorities found out she would have faced punishment. Marya also read widely and was particularly drawn to reading about science and maths. By now her father had got a well paid job as head teacher of a reform school and was able to pay for Bronya's education. In the meantime Marya sought laboratory experience. Finding this type of work was not easy due to the Czarist ban, but in talking to her cousin Joseph Boguski she found help. He ran the Museum of Industry and Agriculture and asked one of his colleagues to tutor her. Before long she had earned enough money to fund herself at university and, in 1891, she travelled to Paris and enrolled at the famous Sorbonne University.

Her Time at the Sorbonne

In 1891 she travelled to Paris and enrolled at the Sorbonne. She lacked knowledge of French and had very little money, but managed to raise enough to stay in an attic in the Quartier Latin. The attic was so cold that she had to put on lots of clothes in order to sleep, but in Marya’s eyes she was at last set free to study science. It was like a new world opened to me, the world of science, which I was at last permitted to know in all liberty. Although classes had been open to both sexes for over 20 years, there were still very few women at the university at this time. At her exposure were all the leading scientists and mathematicians including Marcel Brillouin, Paul Painlevé, Gabriel Lippmann, and Paul Appell. Marya's determination paid off and she graduated in physics in 1893 and maths in 1894.

To further her knowledge as a scientist it soon became clear that she needed to find a laboratory in which to carry out her scientific experiments. In 1894, she was introduced to Pierre Curie who was ten years older than her and owned a laboratory at the Paris Municipal School of Industrial Physics and Chemistry. She learnt that he had undertaken discoveries into magnetism and crystals but had not completed a doctoral thesis. The chemistry between these two scientifically minded people grew and they made a pact that she was not to return to Poland and he would finish his doctoral thesis. Having by now adopted the French-sounding name, Marie, she married Pierre in July 1895 at the town hall in Sceaux and bought bicycles from the money Pierre's parents gave them. The bikes allowed them to take journeys together when they wanted a break from their scientific work. In 1897 she gave birth to a daughter whom they called Irene. That same year, she concluded her scientific studies into the magnetic properties of steel for an industrial association and set about devising her doctoral thesis that would lead her to become the first woman in the world to obtain a doctorate in science.

During the 1890s people were aware that all matter, ie everything around us, is made up of atoms, but that these atoms were 'fixed' or 'unchanging'.

However, two leading scientists, Wilhelm Conrad Röntgen and Henri Becquerel, made discoveries that would lead to this theory being questioned. Wilhelm discovered that electromagnetic radiation could pass through opaque material, but would be absorbed by human bones. Whereas Henri found that uranium salts could give off radiation without the need for light. There was much research into Wilhelm's work concerning rays, but few scientists were concerned with Henri's. Marie, however, was different, in that she took so great an interest in his work that she decided to run her doctoral thesis on his discovery.

As there was very little on this subject she was able to start experimenting straight away. She started her doctoral thesis by examining a number of chemical compounds, containing uranium, in the storeroom of the Paris Municipal School. From these she discovered that only the amount of uranium or thorium present had an impact on the strength of the rays emitted from the compound.

She furthered her findings by examining a number of naturally-occurring uranium ores, including pitchblende from museum samples and discovered that pitchblende gave off radiation that was much more reactive than uranium. It was her belief that a new element was behind the cause of this and set out to track them down. In fact pitchblende has been found to contain 30 different elements and in 1898 they discovered two of them - polonium and radium. Polonium was named after her home country Poland and Radium comes from the Latin word for ray.

However, there wasn't enough of these new elements to satisfy other scientists into trusting them and thus they had to expand their findings in an abandoned nearby shed. Industrial companies however took a different approach and helped Marie and Pierre by providing them with staff, laboratories and raw material. The radioactive materials would then be used in medical research helping with studies in to cancer and other ailments. Research into atoms also took place and Marie's belief that every atom contained energy was confirmed to be correct.

In 1903 she completed her doctoral thesis for her own work on radium. That same year Marie became the first woman ever to be awarded a Nobel Prize, which in her case was for Physics1. The award was shared with her husband who assisted in her work, and Becquerel who first inspired her.

In addition to winning the Nobel Prize Pierre soon became a professor at Sorbonne University and Marie became chief laboratory assistant. The Sorbonne University also created them a laboratory in which to work and teach budding scientists of the future. Sadly, Pierre was fatally knocked down by a horse and carriage in 1906, leaving Marie as the only carer of their daughters Irene and Eve2. Marie had no choice but to carry on working and eventually took over from her late husband becoming not only the first female lecturer at the Sorbonne but, in 1908, the Sorbonne's first female professor (of General Physics).

Having become a well-known scientist she applied to the Academy of Sciences to become a member, but due to the fact that she was classed as a foreigner as she came from Poland she was not accepted.

Being a foreigner was also seen badly by the press who purported that Marie was having an affair with one of Pierre's former students Langevin who was married and had four children. As a result of the newspapers actions Marie was forced to seek refuge by living with friends in Paris.

Following Pierre's death, Marie continued her work to successfully measure the atomic weight of radium. This investigation was a great success and resulted in her, in 1911, receiving a second Nobel Prize, this time for Chemistry. That same year, Curie went to the first Solvay Conference with other world famous physicists and met Albert Einstein. Curie and Einstein became friends, going on holidays together, and Curie's research inspired Einstein to study radium and discover that radioactivity is the same as E = mc2 in miniature.

When World War One broke out, Marie was soon trying to figure out a way in which to help those that got injured on the frontline in Belgium and France. Her solution was to install X-Ray machines in vans and get them driven to casualties that lay hurt on the fields. She enlisted the help of her eldest daughter and those around to help nurse the wounded, drive, fundraise and offer up their vehicles.

The latter years of her life were devoted to promoting, running and raising money for the Radium Institute that she had founded in memory of her late husband. A trip to America and an article entitled 'Marie Curie Radium Campaign' led to her obtaining a speck of radium that enabled many experiments and the purchase of a lot of equipment. She handpicked scientists and followed their work at the Institute. Marie Curie was the matriarch of a Nobel Prize-winning dynasty as her daughter Irene and son-in-law Frederick Joliot Curie went on to discover artificial radium.

When the Curie's started work on radioactive substances, nothing was known about the effects of radiation on the human body. We now know that radium decays to form radon gas which is also radioactive and can be harmful in poorly-ventilated rooms. Radiation from gamma rays can also damage bone marrow and cause some types of cancer, such as myeloid leukaemia. Both the Curies suffered skin burns to their hands from direct contact with radium. They also coped with prolonged illness, which are now identified as symptoms of radiation sickness.

By the 1920s her work on scientific discoveries had taken a toll on her health. Although she didn't believe that her experiments could cause illness it is now common belief that experimenting with polonium and radium can cause health issues. Marie died of leukaemia on 4 July, 1934. Her body was laid to rest next to her late husband's in Sceaux. In April 1995 her remains and those of Pierre's were moved to the Pantheon in France where they were enshrined.

Marie Curie is, of all celebrated beings, the one whom fame has not corrupted.
- Albert Einstein

1Marie Curie was awarded her Nobel Prize only two years after the Nobel Foundation was established.2In memory of her partner she founded the Radium Institute with help from the French Government and the Pasteur foundation.