Exploring A Strange City Content from the guide to life, the universe and everything 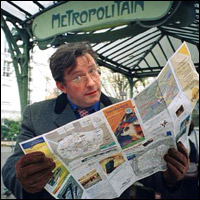 Whether you're on holiday somewhere exotic or just going to the nearest metropolis to shop; whether you're simply wandering around or going somewhere specific; or just in town for a day researching an Entry or having a first look around the place you'll be living for the foreseeable future; whether you've two hours to spend or an entire weekend - sooner or later, you, like everyone else, will face the prospect of quickly familiarising yourself with a strange city. This may seem daunting at first - but, if you keep a few things in mind, the process of acquainting yourself with somewhere new will be painless, and even enjoyable.

These Towns Were Made For Walking

Most city centres were developed long before there were cars, and when wagons were for transporting goods, not people. The best way to really get to know a city in all its facets is as a pedestrian - and it's the cheapest way too. Notable exceptions are places like Los Angeles, where you'll be given funny looks, possibly even picked up by the police, for walking, and where there sometimes aren't even any pavements - so find out before you go whether this is the case. This Entry will assume you've got your walking feet on and a few hours to spend exploring.

Bring as little as possible. Nothing screams 'tourist' like a huge rucksack1, and you won't really need everything that's in it. It will just feel heavier as the day goes by and tire you out unnecessarily. If you're young enough to get away with the student look, you can carry a small backpack. Otherwise, just put what you'd carry for an ordinary day out in your local area into a messenger bag or handbag2. Although it may come as a surprise to you, even foreign cities have shops. If you need fresh socks or something to eat, going into one and trading some money for goods generally works fairly well.

The most important thing to keep in mind is that, before you start walking, you'll need to know where you want to finish. In most cases, this will be where you started - the train station, a hotel, wherever you said you'd meet your group - but it could be quite somewhere else.

Finding Your Way Without A Trail Of Breadcrumbs

You probably won't want to spend a lot of time reading and memorising street signs - so it's easier to navigate by landmarks. Since you're exploring rather than just going somewhere, you'll be paying attention to the sights along the way anyway. There are a few ways to fix them in your mind to make navigation easier.

The thing about well-known places is that everyone knows them. If you're genuinely interested, there's nothing to stop you from going - but don't feel obligated to see all the usual tourist traps; the byways are often more interesting. You don't have to go to see the Eiffel Tower while you're in Paris if you'd rather have a good look through the book shops... You can always just buy some postcards of the places you're 'meant' to visit.

Most cities, especially those with a sizeable student population, have some sort of public transport. It can be very useful for skipping the uninteresting bits between two places you intend to see. However, it can be tricky to find and even trickier to use - it pays to allow plenty of time.

Since you aren't carrying too much - you aren't, are you? We've discussed this! - you'll need to find sustenance at some point to sustain you on your long march. This can be one of the most enjoyable parts of your outing, if done right.

And How To Get Rid Of It

The trouble with cities is they don't have undergrowth in which to do your business - it's generally frowned upon even in parks. But walking around with a full bladder is no fun. What to do?

Even if you're generally quite pleased to get away from the phone once in a while, knowing where to find a working one might come in handy. You should certainly know how to call the emergency numbers, wherever you are. In Europe, this is generally 112, and can be called free of charge from any phone.

Of course, one of the main things that distinguishes a city from a mere accumulation of houses is the prevalence of shops. It's rumoured that nearly everyone enjoys a good look around them, provided they're the right kind of shops. To help you get the most out of your shopping time, keep a few things in mind.

If This Seems Too Daunting

Don't panic! Exploring a city on your own - whether by necessity or for fun - can and should be a very fulfilling experience. If you don't feel up to it, you don't have to go by yourself. Of course, the easiest way is to have someone who knows the place show you around. But you'll find their pace is often too rushed and, while they may know some hidden corners, they'll be impatient when you insist on looking at others. For something closer to the real experience, just ask a few friends to accompany you.

Of course, it will require compromise, but there are certain advantages to finding a few people to walk around with. Just make sure you have similar goals and walking paces.

Not everyone can navigate a city the way the majority of people do. That doesn't mean you can't enjoy an outing to a different city - just that it might require more preparation before you go.

You have a vast and wonderful resource at your fingertips! Not only does h2g2 have many thoroughly informative Entries for your perusal, but there are Researchers from all over the globe here. Stay, chat, make friends, learn something new - be it a slang term you weren't aware of or precise directions to the best place to have lunch in whichever unlikely location you end up in. You might even find someone willing to offer you a guided tour of the highways and byways of their home town!

1Except perhaps the camera around your neck.2Unless you're travelling with a baby, in which case you may need three Sherpas and a mule to pack it all.3And, if you bring a pencil sharpener, make sure it's the kind with the little plastic container to catch the shavings, or you'll have to go look for a bin every time the pencil needs sharpening.4This one, for example!5This is surprisingly easy to forget until it's too late.6The hero, or at least the main character, of Douglas Adams' Dirk Gently's Holistic Detective Agency and The Long Dark Tea-Time of the Soul, as well as the unfinished Salmon of Doubt.7Unfortunately, saying you're a Researcher for the Hitchhiker's Guide probably won't help, and you'll end up washing dishes.8Or you're just plain picky.9Although some cities can be very, very uptight about you carrying anything that might possibly be considered a weapon. It's best to find out about this beforehand.10Or probably shouldn't, at least.