William Banting - the First Person To Market Dieting Content from the guide to life, the universe and everything 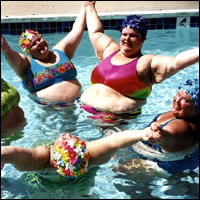 Around the middle of the 19th Century people weren't all that bothered about their figure - other than being prepared to corset and bind themselves into clothing to enhance the desired body shape of the time. People who were overweight just purchased the required corsets in a larger size. So there was no real concept of dieting or serious weight reduction. Being portly wasn't frowned upon in the way it is today, and people didn't understand the medical complications associated with excess weight.

William Banting, and his search for health, changed all that. As a result, he became the first person to publish what was essentially a diet - and one that many of us still practise today.

Banting was born in 1797, and grew up to become a skilled carpenter. His talent for woodcraft led him to become well known as a cabinet and coffin maker to high society. This was in the days when it was really important to get it just right - self-assembly not required. Banting was so successful at providing such a valuable service to the 'well to do' - including the Duke of Wellington's coffin - that he attained an opulent lifestyle for himself and his family. But, as ever, there was a price to pay.

By the time Banting had reached his 30s, he was beginning to show signs of the high life and had gained considerable weight. On the advice of a friend, he began to take exercise by going for a row in his boat every morning. This didn't bring any weight loss, however, since it did nothing but give him an appetite.

He then spoke to someone who suggested he eat smaller meals. This did show some signs of success, but made him lethargic. Since no-one had any advice on what sort of food he should be eating, he ended up tired and suffering from boils and carbuncles1. This resulted in a hospital stay and an operation, following which he was fed a lot to regain his strength. All of this added to his weight problem - he just got bigger and bigger.

When Banting reached retirement, aged 65, despite his best efforts he was a rather rotund little man. Standing at only 5ft 5in, he weighed in at over 14 stone: 202 pounds. This Pickwickian2 physique caused him considerable mobility problems. He suffered particularly when trying to descend stairs, a task which he could only achieve by coming down backwards to decrease the shock on his knees and lower body. Since Banting tired very quickly and felt generally ill lugging all this weight around, he embarked on a mission to find a cure for his obesity.

William did what every Victorian gentleman with a problem did and trotted off to various spas in order to take the water. The results were less than spectacular. The best that could be said about the venture was that he didn't gain any weight.

Banting then began a circuit of all the doctors, and indeed quacks, that he could locate, and tried everything from vapour baths and shampooing to lotions to potions - all to no avail.

The turning point came when he began to lose his sight and hearing and consulted Dr William Harvey. Dr Harvey was an aurist3 and fellow of the Royal College of Surgeons. He had just returned from a trip to Paris where he had met Dr Claude Bernard, an eminent physiologist. Dr Bernard had associated the way the liver deals with starches, sugars and fats with diabetes, and was researching the effect of diet on both the organ and the disease. Dr Harvey was impressed enough to relate this to Banting, and indeed advised him to embark on a monitored diet, restricting his intake of the offending foodstuffs.

Banting undertook the diet plan with gusto, having been assured by Dr Harvey that all his ailments were a result of his obesity. The diet plan called for the exclusion of carbohydrates and was later published by Banting as follows4:

Despite eating his fill, Banting lost weight dramatically. Within the year he had reduced his weight to 156lb, and his girth by just over 12in. But most pleasing to him was the restoration of his hearing, sight, and indeed his improved mobility.

He continued with his diet and extolled its virtues in a pamphlet entitled Letter on Corpulence, which he distributed free to those wishing to avail themselves of it. Banting went on to publish further editions, and by the third edition charged one shilling per copy, the proceeds of which he donated to various charitable causes.

His diet became known as 'banting', and the word entered the English language as the verb 'to bant' - apparently still widely used in Sweden today.

Banting discovered things about diet that have only been confirmed by science in recent years6. He realised that the protein in meat and fat makes us feel full for longer and results in us wanting less food. He also noted that being obese does not sit well with exercise programmes, and weight reduction in the first instance will produce better results. Most importantly, however, he discovered that, in practice, our diet affects our health and well-being to a greater extent than was ever imagined in his time:

No doubt the system was known, and had been practised, but only to promote muscular vigour in healthy people, for special objects, yet had never been applied to the unhealthy and corpulent, because it was impossible for such people to take the necessary exercise and sweating. It is now proved that, by proper diet alone, the evils of corpulence may be removed without the addition of those active exercises, which are impossible to the sickly or unwieldy patient.

Banting put into practice a diet that in those times was exclusively for the use of sportsmen, including prize-fighters, and showed that, even excluding the exercise element, it was possible to start out obese and get yourself fighting fit.

He didn't reach the size zero which is so prized by the 21st-Century fashion industry, nor did he strive to. But he did stay with his diet and maintained a healthy weight until his death in 1878, aged 81. He was buried in Brompton Cemetery, London - one of the healthiest corpses in the place.

I can now confidently say that QUANTITY of diet may be safely left to the natural appetite; and that it is the QUALITY only which is essential to abate and cure corpulence.

1Boils and carbuncles are both pus-filled lumps caused by bacterial infection.2Like Samuel Pickwick from Charles Dicken's The Pickwick Papers; physically short and fat.3A specialist in hearing problems.4Health and Safety requires that you should contact a doctor before embarking on any diet plan - including William Banting's.5At the time it was thought that these meats contained carbohydrates.6Much of this research has been based around the popular and very similar Atkins Diet.