Hearing Aids Content from the guide to life, the universe and everything 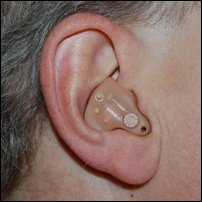 'Hearing aids' is the collective term given to a number of different types of personal amplification equipment used by those whose hearing does not fall within 'normal' limits (as defined by audiologists).

Some people prefer not to use personal amplification, and there are wide-ranging debates about both this and choices of communication. The purpose of this entry is not to discuss these issues or define how our sense of hearing works (see Hearing the World Around Us for the latter).

These aids can be further split into three categories: analogue, programmable and digital.

Analogue aids are the oldest type and give the same amplification to sounds across all frequencies, regardless of a person's individual hearing loss. They can be set to allow a little more gain to the low frequencies (low pass, high cut) or more gain across the high frequencies (high pass, low cut). They are set or altered with a screwdriver.

Programmable hearing aids use an analogue signal processor but are set or altered via a wire attached to a computer, not by a screwdriver. Thus they were an early introduction to the way digital aids would be programmed, and a few people in the UK were issued with them during National Health Service trials in the late 1990s and early 2000s.

Digital Signal Processing (DSP) aids, commonly known as digital aids, use a digital processor to amplify sound. They are set and altered using a lead attached to a computer and programming box. DSP aids can be set to amplify sound at different levels across the frequencies. In this way they can better target an individual's hearing loss, as shown on their personal audiogram. DSP aids use Wide Dynamic Range Compression, which means that they compress sound into an individual's hearing range (analogue aids would clip the waveforms, leading to distortion). DSP aids give priority to speech sounds, helping with background noise problems. (A person with a permanent sensori-neural hearing loss often finds it physically impossible to pick out the sound or voice they wish to listen to. This is the opposite of what is sometimes called the Cocktail Party Effect, described in The Wonder of the Human Ear.) The aids have multiple programmes which can be set for different listening situations. For example, a DSP aid may sense that music is not a speech sound and turn it down. To counter this situation, the wearer can have a programme specially set for listening to music where the aid does not search for speech. The aids have many additional features, such as feedback suppression and directional microphone.

ITE aids work in the same way as BTE aids but are designed to fit inside the ear canal. They are, therefore, considered more discreet than BTE aids, but wearers can suffer from increased condensation problems (moisture forms inside the tubing and affects the sound heard). In the UK these hearing aids tend to be bought by the user from private suppliers, although the National Health Service may prescribe them for those who would find it difficult to wear BTE aids (perhaps due to physical differences).

Bone-anchored hearing aids, as the name suggests, require a surgical procedure during which they are attached to the wearer's skull, specifically to the mastoid bone, behind the ear. The outer part of the aid looks like a small rectangular box. BAHAs, as they are commonly known, work by sending the vibrations created by sound-waves to the cochlea (inner ear). The cochlea then converts these vibrations to sound. The aids, therefore, do not amplify sound in the same way as BTE or ITE aids do.

Bone-anchored hearing aids are given to those who have a conductive hearing loss (affecting the outer or middle ear) as they need a functioning cochlea to work. They are generally fitted when a BTE or ITE aid could not physically be worn - as, for example, when an ear is not fully formed.

Cochlear implants also require a surgical operation in order to be fitted. They can usually give better amplification and access to speech frequencies than conventional hearing aids and are given to people who derive little or no benefit from such aids. As hearing loss is measured on a sliding scale, someone who cannot be aided conventionally may have some residual hearing which a cochlear implant could amplify effectively1.

The inner (implant) part of the device consists of a receiver and array of electrodes, which are inserted into the cochlea. When switched on at a later date, these electrodes stimulate the hair cells which send messages to the brain via the auditory nerve. The outer part of the equipment consists of a microphone (worn behind the ear) and a magnet (attached to the head) which transmits sound transcutaneously to the implanted device. There is also a speech processor which can be clipped to a waistband (a smaller version is now available which attaches to the microphone behind the wearer's ear). The speech processor helps to convert the sounds heard into recognisable speech sounds before sending them to the auditory nerve.

When a person has a cochlear implant their hearing is not restored; when they take off the outer equipment they still have the same hearing loss. There is also the need for auditory rehabilitation, as wearers need to learn to differentiate among and give meaning to the new sounds they will hear when the device is switched on. Cochlear implants have been called 'bionic ears' but are not, as is sometimes believed, a 'miracle cure' for deafness.

Tactile Aids, like BAHAs, pick up and magnify sound-wave vibrations. They are often worn round the wrist and look like velvet wristbands (similar to those used as weights in aerobic gymnastics). Tactile aids are used by those who derive little or no useful benefit from hearing aids. This may be because they are profoundly deaf or they may be unable to use hearing aids due to other difficulties. Tactile aids give the wearer an insight into the world of sound, helping them to understand that when an object is dropped or a person's lips move, sound is produced. This gives the wearer a wider experience of sensory stimulus (with the emphasis on perceiving rather than expressing speech). These aids are not usually worn all waking hours as other hearing aids are.

Audiological technology moves fast and each type of hearing aid is constantly being updated; however, as of this writing, the five aids detailed above are the mainstay of current hearing aid use.

For more information, you can visit some of these useful links:

1Note that the word 'cochlea' changes spelling when used in the phrase 'cochlear implant'.