Jellied Eels Content from the guide to life, the universe and everything 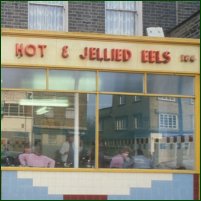 Jellied eels are a traditional dish from the East End of London. As the name suggests, jellied eels are stewed eels in a spiced jelly that is made from the stewing juices. It's a food that is sold by street vendors, although it can more usually be found in 'pie and mash' shops, and can be bought throughout London and Essex due to the migration of the East London population. It is commonly eaten with another East End delicacy, 'pie, mash and liquor' - which used to be made with eel fat. Beef or lard is more common nowadays.

This dish, either delicious or disgusting, depending on your point of view, finds its roots in the muddy Thames estuary, which is a good habitat for eels. They were easy to catch locally, and it was easy to keep them alive in barrels for long enough to bring them to market, so the supply was easier than that of other kinds of fish. They were common, cheap and easily transportable, making them a favourite in the East End. Unlike oysters, which were once a cheap and common sight in the East End, jellied eels haven't gained a widespread popularity.

Making jellied eels isn't an exact art and it is difficult to find a definitive recipe, let alone any agreement on how to present them once they're cooked. If you want to try them, the best thing to do is pay a visit to the East End - but, wherever you eat them and whether they are served hot or cold, with or without chilli vinegar, it is important that they remain on our streets and in our hearts, lest we forget where we come from.

My parents were born and bought up in the East End and evacuated to the country when the war started.

I remember only too well being taken to pie & mash shops and jellied eel stalls on trips back to the East End to visit relatives in the 1960s.

I still enjoy a good bowl of jellied eels when I can get them; in my opinion the best I had were from Tubby Isaacs's stall at the end of Brick Lane in Aldgate east, I don't know if it is still there.

I also remember that you had to make sure the vendor did not try and give you too many tail ends as these had little meat on them.

1Please note that jellied eels contain bones and any attempt to slurp them might be accompanied by a nasty choking fit and a trip to the Royal London Hospital Whitechapel (or other local hospital).