Body Odour Content from the guide to life, the universe and everything 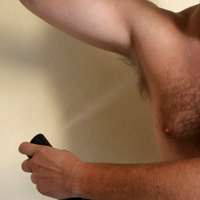 Body odour is a phenomenon of great importance to modern men and women, particularly to those youngsters who are just emerging into physical adulthood. By body odour, we mean the unpleasant smell from underarms, groin, feet or scalp, although the latter two are usually thought of separately from the others.

Body odour is produced when the bacteria, which normally grows on skin, decomposes sweat. Human skin produces two kinds of sweat, the cooling watery liquid produced by the eccrine glands and the milky secretion of the apocrine glands. We have two or three million eccrine glands covering our body, and eccrine sweating starts from birth. The skins of infants are covered with apocrine glands - this is why babies have such a distinctive smell. Most of these glands stop working several months after birth, however, and remain shut down until the onset of puberty, at about eight years old for girls and nine years old for boys, when stimulated by the hormone testosterone. In adults, apocrine sweat glands number a mere 2000 or so and are concentrated in the groin and armpits, although there are also some on the scalp and elsewhere. Apocrine secretion is stimulated by hormones and also by fear and stress. Stress sweating occurs mainly in the underarm areas, feet and palms (this phenomenon is exploited in lie detection).

It's the apocrine secretion that causes the odour problem. Certain anaerobic bacteria (corynebacteria and micrococci) feed on this stuff and produce the pungent odour we have been taught to fear in ourselves and abhor in others for its social consequences.

Body odour can be effectively controlled by good personal hygiene. Wash at least once a day and after exercise. Bacteriocidal soaps may help. Change your clothes often and wash them well to remove the sweat and kill the bacteria that transfers from your skin. To get you through a stressful day, however, you may want to use commercial products. Deodorants cover up BO, with more pleasant fragrances and antiperspirants controlling the sweating itself. Most modern products combine these two effects. Neither is a complete or lasting solution, however, as the bacteria grows back quickly and sweating never entirely stops.

The ancient Egyptians were apparently the first people to come up with the idea of masking body odour by applying combinations of citrus oils and spices - these didn't add to the problem by turning rancid. They also discovered that shaving armpit hair reduced odour. (The hair provides a large surface area for bacterial growth.)

Until the 19th Century, perfume was the only way to deal with body odour. Effective commercial products for dealing with body odour then appeared, but the market really skyrocketed in the 20th Century when advertising convinced people that social success was not to be attained unless body odour was controlled. The euphemistic 'BO' was first used in US ads for 'Odo-ro-no', a product for women, in their 'always a bridesmaid, never a bride' campaign. (Listerine, the mouthwash producer, soon jumped on this bandwagon as well.) At the time, even that was a somewhat shocking marketing innovation, because body odour had always been one of the unmentionables, very indirectly hinted at in advertisement. Since then, the deodorant industry has never looked back.

Building on growing public concern over chemical effects on health, the new wave in marketing is the 'natural' product that may include aloe, or coriander, or any natural-sounding thing. Alum, a mineral crystal, is also being sold in various sizes and shapes as 'deodorant stone' or 'deodorant crystal'. It is supposed to work by killing the bacteria. Deodorants are now big business. As an example, the top six deodorant/antiperspirant products in the US grossed nearly a billion dollars in sales in 2000. Worldwide sales of these products totalled US$8.5 billion in 1999.