'You Are What You Eat' - The Impact of Diet on Behaviour Content from the guide to life, the universe and everything 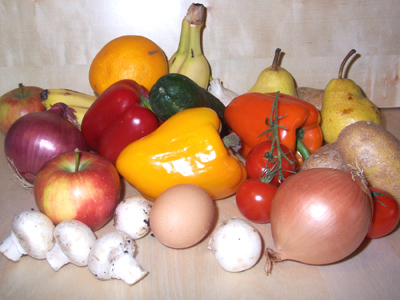 The saying 'You are what you eat' is as old as the hills. While most people are aware that diet is important, it is easy to forget that what we eat has massive consequences that go far beyond the cosmetic. It's also easy to simply accept social trends (such as the trend towards processed packaged foods) and information from possibly biased sources instead of questioning the assumptions we have about food and checking up on sources. This entry aims to provide basic information on how ideas about food reach us, affect our choices, and finally affect our health.

'Food pyramids'1 are used in nutritional science classes in British and American schools and by health care professionals such as GPs to provide information on nutrition. Superficially, it would appear reasonable to assume that these pyramids are the result of up-to-date research on nutrition and health, and that these guidelines are provided by governmental health agencies purely as a public service. But is it more complicated than that?

Every government walks a tightrope between the public good and financial obligation. The food industry in the UK and USA is a major player in export, making a substantial contribution to the economy, and in certain sectors it also takes substantial amounts of government money in the form of subsidies. Lobbyists representing a variety of sectors in the food industry are highly motivated to bring any political and financial influence they have to bear on government food policies in order to protect their interests. Can these sometimes conflicting obligations result in flawed governmental advice on nutrition?

In America, the US Department of Agriculture (USDA) is responsible for the creation of dietary guidelines. A USDA/DHHS Dietary Guidelines Advisory Committee consisting of experts on health and nutrition and USDA officials meets to create the government's official guidelines, which will then be used as standard by schools, hospitals, and the general public. Both Professor Marion Nestle2, and Dr Meir Stampfer3, have sat on this committee, and both refute its guidelines. Professor Nestle has been an outspoken critic of the food industry's influence on governmental policy decisions, and Dr Stampfer has publicly declared his anger at the pressure brought to bear on the committee by lobbyists. Dr Stampfer's proposed food pyramid is based squarely on scientific research, and differs in significant ways from the USDA official food pyramid.

Comparisons between the standard British and American food pyramids show them to be almost identical, with only a suggested serving of two more of vegetables and fruit in the British version.

The taking of vitamins and minerals as dietary supplements is often pooh-poohed as unnecessary - after all, it is often said, you can get all the vitamins you need from a balanced diet. As we've seen, what many people (often including GPs and other healthcare professionals who are not specialists in the area of current research on nutrition) are taught is a balanced diet may not be all it's cracked up to be. Yet, surely, we should be able to meet all our dietary requirements the old-fashioned way, from food?

For over half a century, the Food Standards Agency has compiled an authoritative guide to the nutritional value of food consumed in Britain: McCance and Widdowson's 'The Composition of Foods'. The latest imprint shows that the food consumed in 2002 contained far fewer trace elements than when the report was first issued in 1931. This is due to industrial farming, which combines heavy use of chemicals with large monoculture cropping and massive livestock farming, resulting in pollution, loss of biodiversity, and massive topsoil erosion, and to the revolution in processed foods, resulting in foods high in fats and sugars and low in nutritional value. Further, the use of chemicals in farming means that we are ingesting large amounts of pesticides and other chemicals from a variety of sources, at what can be toxic levels. And what we eat and drink are inextricably linked to a variety of global environmental and political problems we often don't think about - the production, processing, and transport of our food all have their consequences. Overfishing, for example, means that fish stocks have collapsed to a catastrophic level. Omega-3 fatty acids are often derived from fish, but other excellent sources include the culinarily-overlooked linseed (known in America as flaxseed).

One commercial organisation representing organic farmers, the Soil Association, believes that all is not lost, and that a return to organic farming, heavy on crop raising and light on livestock rearing, can eventually return our soil - and our diets - to good health.

The subject of dietary supplementation is hotly disputed by government officials and medical professionals. On the pro-supplementation side stands the government's own statistics on the nutritional make-up of food and the various findings noted in the section below, as well as Drs Fletcher and Fairfield's research published in JAMA (Journal of the American Medical Association)4 in June 2002, which stated that 'It appears prudent for all adults to take vitamin supplements'; on the anti-side, the FSA argues that sufficient vitamins and minerals can be obtained through a balanced diet. It is important to use common sense and check the recommended daily dosage for any dietary supplement - rare though it is, taking extremely high doses of supplements (megadosing) can cause illness, though the limits of what constitute proper daily intake as opposed to megadosing are currently disputed.

A study on the correlation between diet and behaviour in one set of identical twins, showing a dramatic increase in IQ test results and decrease in discipline problems in the twin on an additive-free diet, is only the latest in a series of similar studies. Dr Bernard Gesch, a research scientist in physiology, carried out a Home Office-backed study on http://www.guardian.co.uk/uk_news/story/0,3604,743899,00.html inmates at a maximum security facility in Aylesbury which had dramatic results: among those inmates on a regime of dietary supplements, serious disciplinary offences (including acts of violence) dropped by 37% - once the study was concluded and the prisoners returned to their usual diets, the prison staff reported a rise in violence against them of 40%.

During his presentation to the Associate Parliamentary Food And Health Forum (FHF) regarding the Aylesbury experiment, Dr Gesch outlined nine previous studies by a number of researchers on both sides of the Atlantic drawing strong relationships between diet and behaviour in prison or school situations dating from between 1976 and 2003 - not one of which was funded for follow-up. He also points out that the diet of the general population has changed dramatically over the past few decades from fresh whole foods to highly refined and processed packaged foods - it is also worth noting that our intake of animal products is drastically higher than it was before WWII, and at the same time livestock has become more exposed to chemicals (herbicides, pesticides, antibiotics, etc.) than ever before, leading to unprecedented levels of pollution of groundwater in both Britain and America; at the same time, levels of physical activity have dropped alarmingly. Dr Gesch lists in his presentation the many deficiencies in trace elements detected in the offenders at Aylesbury.

Dr Joseph Hibbeln5 followed Dr Gesch's presentation by pointing out that the change in diet has resulted in dramatic changes in the ratio of Omega fatty acids consumed by Americans, and that the intake of these essential fatty acids is crucial to the formation of the brain. In other words, the formation of every system and function of the body is affected by diet, and the average western diet is not only lower in nutritional value than it was a few decades ago, but even the healthiest diet is lower in nutrients due to the rapid deterioration of topsoil in the age of industrial farming. Dr Hibbeln referenced five major studies on links between food and behaviour, and added that Dr Gesch's conclusions were in line with cross-cultural epidemiological6 and long-term studies on links between diet and behaviour, and with the known 'neurochemical mechanism(s) related to violence and impulsive behaviours'.

To make matters worse, heavy drug use can have an adverse impact on the absorption and retention of nutrients, and many prisoners either have drug problems on entering the prison system or acquire one once inside. Further, Dr Gesch's Aylesbury study points to poor dietary choices made by prisoners, which perhaps points to a general lack of awareness about nutrition among prisoners (disproportionately drawn from poorer sections of society due to a number of factors), and may indicate that the general public is not as well educated on diet as is usually assumed. The influence of food advertising, especially during childhood (the crucial period for the physiological impact of nutrients), may well play a significant role in the dietary choices made both by prisoners and the general public.

As seen in the FHF presentation, Gesch and Hibbeln are not alone in their conclusions. The nine studies Dr Gesch cited and the five specific studies cited by Dr Hibbeln are only part of the growing body of evidence since the 1970s that strongly supports a link between diet and behaviour. In 1997, The Sunday Times referenced several studies on the correlation between low levels of zinc and anti-social behaviour and ADHD. Similarly, links between fatty acids, dyslexia, and behavioural problems such as ADHD were found by researchers from Oxford University and London's Imperial College School of Medicine during a study on children with dyslexia and behavioural problems in Northern Ireland. Prof. Ian Town of Christchurch School of Medicine and Health Sciences in NZ is currently conducting a long-term study of the role of iron deficiency in behaviour, and, as a result of a study on the link between diet and behaviour in schoolchildren by Dr Charles Pollak7, the Scottish Executive changed its policy on school lunches. Initial research into the effects of diet on aging show that a poor diet in early life leads to an inability to use anti-oxidants, and so to early aging and death in animals; further research will be undertaken to determine whether the same holds true in humans.

Obviously, diet is not the sole cause of anti-social or criminal behaviour - there are many factors involved. But it does seem clear that behaviour, mental health, and the development of cognitive functions and impulse control are directly and drastically modified by diet.

Given the FSA's own survey of the bioavailable nutrients in food compared with 70 years ago, the increased reliance on processed and refined foods, the dramatic fall in consumption of Omega fatty acids, and the available studies on diet and behaviour, it would be wise for those in the affluent global north to take serious stock of dietary trends and habits - and their consequences.

1Visual representations of nutritional guidelines, with the main food group as the base of the pyramid.2Professor and Chair of the Department of Nutrition and Food Studies at New York.3 Professor in the Departments of Epidemiology and Nutrition and Chair of the Department of Epidemiology at the Harvard School of Public Health.4The abstract of this report can be readily accessed, but in order to read the report itself, one must register with the JAMA website.5An Officer of the United States Public Health Service and Chief of the Outpatient Clinic, Laboratory of Membrane Biophysics and Biochemistry at the National Institute on Alcohol Abuse and Alcoholism.6Epidemiology: the study of the causes, distribution, and control of disease in populations.7Ohio State University.