World's Tallest Buildings - A Timeline for the 20th Century Content from the guide to life, the universe and everything 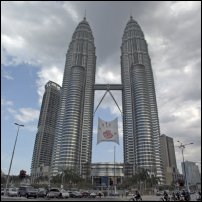 The beginning of the race for the sky in skyscraper construction that came at the end of the 19th Century was born out of a convergence of events and technologies, necessary for such apparently quantum leap advances.

Chicago, a city destroyed by fire in 1871, needed to be rebuilt, and quickly. Political pressure for a 'fire-proof' city meant that iron was to be used for building frames instead of the timber that had supported the 18,000 buildings destroyed by the flames. Furthermore, Chicago was a booming industrial city with a burgeoning labour-base, itself with a need for accommodation close to the industrial downtown. Couple these requirements with the fine-tuning of Elisha Otis' invention of the lift (elevator) earlier in the 19th Century and it is easy to see why Chicago elected to go upwards rather than sprawl outwards.

The result, in 1885, was the Home Insurance Building, the World's first skyscraper, insofar as it was the first 'tall' building to have a complete frame as a supporting structure. After that it was a race to the sky.

But First, Some Explanation is in Order

These things are never simple. In order to settle the dispute between the Petronas Towers and the Sears Tower, the Council on Tall Buildings and Urban Habitat (CTBUH) measures tall structures against four criteria:

Confusing maybe, but the first of these is the key criterion used by CTBUH to determine the "world's tallest building". All are measured from the sidewalk level of the main entrance of the building, which discounts oil rigs. Moreover, the CN Tower in Canada, despite being taller than Kuala Lumpur's Petronas Towers is not recognised by the Council as 'a building' as it was built to house communications equipment (comprising not much more than a shaft and an elevator) and not for residential or commercial purposes.

So without further ado, here's a chronological list of the World's Tallest Buildings during the 20th Century.

Facing City Hall in lower Manhattan, New York City, stands the 118m (386ft) high 30-storey Park Row Building, sometimes known as the Ivins Syndicate Building after William Mills Ivins, the head of the investment group which commissioned its construction in 1896. Designed by prominent architect RH Robertson the building took over three years to construct and stood as the world's tallest building for nine years from its completion in 1899 until its height was bested by the Singer Building in 1908.

Architecturally, the Park Row Building consists of two steel-framed masonry-faced rectangular boxy towers, yoked together by bracing. Its distinguishing feature is the pair of 5m high copper cupolas which top off the front-facade of the building, and which are either 'a signature presence' or 'insignificant terminations', depending on architectural bent.

At the northwest corner of the junction of New York City's Broadway and Liberty Street stands 1 Liberty Plaza1. It is on the site of the erstwhile 187m (612ft) high 47-storey Singer Building, which was the world's tallest building for 18 months between 1908 and 1909 when its height was surpassed by the Metropolitan Life Insurance Company Tower. Excluding the September, 2001 destruction of the twin-towers of the World Trade Centre, the Singer Building carries the ignominy of being the tallest building ever demolished2.

The Singer Building, named after its owners (the sewing-machine company), was designed by architect Ernest Flagg and was constructed in just 20 months between September 1906 and May 1908. Upon completion, it was dubbed the world's tallest Christmas tree on account of both its red-brick and bluestone exterior and the fact that it was also the world’s first electrically-lit tower (referring to the lights in the spire).

The 213m (700ft) high 50-storey Metropolitan Life Insurance Tower standing on New York City's Madison Avenue was the world's tallest building from 1909 until 1913 when its height was bested by the Woolworth Building. It was designed by architectural firm Napoleon LeBrun and Sons, and took two years, from 1907 - 1909, to construct.

The italianate-style square tower with its steep pyramidical roof is purposely evocative of the San Marco campanile in Venice, and features an enormous eight-metre diameter clock-face on each of the four (erstwhile ornate) facades. Originally sheathed in white Tuckahoe marble, the building was 'modernised' (in the 1964 sense of the word) when it was re-clad with limestone, and generally simplified.

At the intersection of New York City's Broadway and Park Pace stands the 241m (792ft) high, 58-storey Woolworth Building, which held the record for being the world's tallest building from its completion in 1913 until 1930 when the Bank of Manhattan Trust Building went taller.

Conceived in 1910 by the king of 'Five-and-Dime', FW Woolworth, and designed by architect Cass Gilbert, the terracotta-faced steel-framed Woolworth Building is often dubbed the Cathedral of Commerce3 on account of its gothic evocations of religious architecture. The building itself essentially consists of a tower upon a tower, not dissimilar to a church steeple, and internally, vaulted ceilings and cruciform floor-plans emphasise the quasi-religious mood.

Objects of a bizarre race, both buildings were erected more or less simultaneously. Work commenced on the two buildings in the late 1920s, the Chrysler Building sponsored by motor manufacturing magnate Walter P Chrysler and the Bank of Manhattan Building at 40 Wall Street funded by developer George Ohrstrom. The title of owning the tallest building in the world was a status symbol that each man sought for himself. To add spice to the contest while the Chrysler Building was being designed by William Van Alen, his former partner H Craig Severance was busy earning his crust designing for Ohrstrum.

At first it was thought that the Chrysler Building, with its white and dark grey brickwork, had lost the race, when the Manhattan Bank Building (a 2818m-tall art deco box with an ornate pyramidal crown and a gothic spire) went taller. Still, within a week, the Chrysler people launched from within the structure itself its distinctive telescopic chrome-nickel steel spire to top out at 319.5m - genius.

Situated between 33rd and 34th Streets on 350 Fifth Avenue, New York is probably the best-known and best-loved of all tall buildings, earning its place (perhaps arguably) in a list of the World's Most Beautiful Buildings is the Empire State Building. When it surpassed the Chrysler Building for height in 1931, the 381-metre-high 102-storey building that was to become an icon of New York, if not the United States, managed (with assistance from the Great Depression followed by World War) to put a cap on a tall building boom, holding the record for forty years.

Infamously destroyed by terrorist attack on 11 September, 2001, the 417m(1368ft)-high 110-storey World Trade Center Tower 1 stood as the World’s Tallest Building from its completion in 1970 until 1973 when the Sears Tower (in Chicago, USA) was topped off.

Together with its 2m-shorter twin, World Trade Center Tower 2, the determinedly modernist Trade Centre Towers, designed by architect Minoru Yamasaki, stood at once as both the focus of a commercial development in downtown Manhattan and symbols of America’s achievements in finance and technology.

Sitting on two Chicago city blocks and rising a quarter-mile (1,454 feet, 443 metres4) above the ground, the Sears Tower's 110 storeys comprise some 409,000 square metres of office and commercial space. If you could pick it up and weigh it, it would tip the scales at 222,500 tons. This great black behemoth was designed by architectural firm Skidmore, Owings and Merrill to accommodate the 7,000 employees of mail-order catalogue company Sears, Roebuck and Company in one building, and was constructed between 1970 and 1974.

The twin Petronas Towers took the title of the world's tallest building from Chicago's Sears Tower in 1996, meaning for the first time in over 100 years the title rested outside of the USA. Designed by Cesar Pelli and Associates, each tower's profile in plan is an eight-pointed star, a symbol with strong Islamic resonance. As well as the shape, a defining feature of the Petronas Towers is the 58.83m long skybridge which connects the two towers at the 41st/42nd storeys.

At the time of writing the race for the skies is fully expected to continue into the 21st century.

In 2003, Taipei 101, in Taipei, Taiwan - at 101 storeys and 509m (1,671 feet) - took the mantle from the Petronas Towers. Designed by CY Lee and Partners, the steel and glass skyscraper is known by some as the noodle-box on account of its resemblance to a pile of cardboard take-away cartons. The inspiration is in fact a traditional Chinese pagoda with eight tiers of eight storeys each5 and a narrow pinnacle tower with spire.

And currently under construction, also in Asia, in Dubai, United Arab Emirates is the Burj Dubai, a 601m tall pointy spire of a building. Expected to be completed in 2008, the Burj Dubai will be the tallest structure in the world in all four of the criteria listed by the Council on Tall Buildings and Urban Habitat. But not for long one suspects.

1Also known as the U.S. Steel Building.2In 1968.3Coined by the Reverend S Parkes Cadman at the opening on 24 April, 1913 when US President Woodrow Wilson pressed a button to illuminate all the building’s lights.4520m if you include the antennae.5Eight is a lucky number.