A Brief History of Map-making Content from the guide to life, the universe and everything 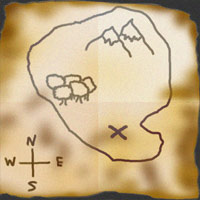 Maps have been used for thousands of years to help people get from one place to another. They illustrate features in the landscape in order to guide us to our destination. Today, we largely take them for granted and expect them to be easily available in one form or another.

Maps are a snapshot in time and therefore provide a fascinating image of the past, both in terms of what was physically present on the ground, such as settlements and roads, and in terms of the philosophies of map-makers, such as the belief that the world was flat.

It all started in the earliest civilisations of Mesopotamia and China. The Greeks and Romans advanced the science of map-making and it was the Europeans from the 15th to 17th Centuries who really drove its development, as they strove to increase their riches and influence over newly-discovered areas of the earth. Thereafter, colonial explorers in the New World continued to pursue the science and technology. In the 20th and 21st Centuries, the western world has been at the forefront of new mapping techniques and innovations.

The science and art of making maps1 dates back at least to Babylonia in 2300BC, from where the earliest known maps were created on clay tablets, showing settlements, crop fields and irrigation sources. Mesopotamian maps of around 1600BC depict cities and tracks between fields and the built up areas. These are typical of early maps, which show settlements, hunting grounds, water sources, land boundaries and significant landscape features. There were also maps of individual buildings2. It is upon similar physical principles that modern maps are based.

Other prehistoric finds, from other parts of the world, include bones with likenesses of coastlines carved into them, which were probably carried in canoes as navigational aids in North America. Polynesians wove intricate palm leaf mats with twigs positioned to show currents and prevailing winds and shells depicting islands. Small versions of these mats were used on trips between islands and larger ones were used to teach future navigators.

The Greek and Roman Influence

Map-making developed significantly with the Ancient Greeks. The map drawn by Hecataeus in the 6th Century BC shows the world as an island, with Greece at its centre. However, by the time of Aristotle, around 350BC, the spherical earth concept was accepted by all. Ptolemy3 was the first to illustrate the earth as spherical in his world map, which covered the Old World from latitudes of about 60°N to 30°S. He projected the spherical earth onto flat paper for the first time.

At the same time, other cultures in the world were developing maps. For instance, in China they were being carved on wooden plates from around 240BC onwards.

There is a long gap in our knowledge about the development of maps from the 2nd Century AD until the Medieval period. By this time most world maps were dominated by religious views4 and while the Church of Rome was the driving force behind map-making, Jerusalem was the centre of the known world, reflecting the religious doctrines of 14th-Century Europe. The Hereford Mappa Mundi, dating from 1300, is typical of this type of European map, showing Jerusalem at the centre and the east to the top.

The great European ocean-going explorers such as Columbus, da Gamma, Cabot, Vespucci and Magellan all took map-makers along on their voyages to map out the new lands that they discovered, as well as the routes to and from the new lands. These ocean maps, or navigation charts, were very highly valued for commercial and military purposes. They were guarded carefully and treated as national treasures by the western European monarchies that sponsored these journeys of discovery.

The Danish geographer, Clausson Swart, drew the first known map of Northern Europe in 1427. In 1491 Cardinal Nicholas Krebs developed the first modern map of Germany. Erhard Etzlaub produced the Romweg in 1500, which is regarded as the earliest route map.

In 1508 Rosselli produced the first map to show the entire known world. Then, in 1513 Martin Waldseemuller produced the first known atlas, which was made up of 20 maps of France. Waldseemuller is best known for producing his map of America in 1508, after the exploration by Amerigo Vespucci. It was a huge map, divided into 12 sheets and showed for the first time that America was not connected to Asia.

Until the 15th Century there was no printing, so maps were precious objects, available only to those with wealth and power. The invention of the printing press made them cheaper and more widely accessible. Maps were initially printed using carved wooden blocks, until engraved copper plates were introduced in the 16th Century. These were used up until the end of the 19th Century, when photographic technology replaced them.

Gerardus Mercator was a Belgian and the leading geographer and cartographer of the mid-16th Century. He developed the cylindrical Mercator Projection in 1569, that most map-makers still base map projections on today5. No flat map can keep size as well as shape correct for a spherical earth and the Mercator Projection stretches the poles to the same width as the equator. This results in Iceland appearing to be the same size as Kenya, when it is in fact five times smaller. However, this projection allows for simple visualisation and navigation, as it keeps directions accurate, albeit at the expense of distance, area and shape.

Maps for Colonial and Military Use

Maps became more accurate and factual through the following centuries, as scientific mapping methods were developed and applied. During the 17th and 18th Centuries, cartography and printed maps greatly advanced the conquest of the New World and Africa, as it was possible to view distant lands and develop strategic tactical plans, before deploying ships or troops.

Even within Britain, mapping was used to control the people. Following the 1745 Jacobite Rebellion in Scotland, Major General William Roy was dispatched to map the country in detail. His maps were used to assist the policing of the rebellious Scots for decades. The maps are still in use today as the basis of the Ancient Woodland Inventory of Scotland. Roy's pioneering work using new theodolites and mapping techniques led directly to the establishment of the Ordnance Survey in 1791, which is now the world's largest producer of commercial maps.

In North America, map-making was integral to the American War of Independence, through John Mitchell's 1755 map, on which the boundaries of the new United States were defined by American and British negotiators in Paris in 1782 - 836.

Another notable piece of map-making in North America, was that of the Mason-Dixon Line, which is most commonly associated with the division between the northern and southern (free and slave, respectively) states during the American Civil War. In fact the line was delineated in the mid-1700s to settle a property dispute. The two surveyors who mapped it were Charles Mason and Jeremiah Dixon from England.

The invention and development of man taking to the air7 and then photography, led to significant advances in mapping the world, especially of those areas not accessible by land. Aerial photography became especially important during World War II, for the reconnaissance and mapping of bombing targets in particular.

Satellite photography and imaging followed on a few decades after aerial photography and we are probably all familiar with photographs of the earth from space, showing cloud formations, light sources, ocean currents and landforms.

The biggest revolution in map-making occurred in the 1970s with the development of Geographic Information Systems, or GIS. These used all the information held about a given area - and in 1973 the first computerised large scale, digitised maps appeared in the UK. Complete digitisation of the country was achieved in 1995.

In traditional paper map-making, the map is both the database and the display of geographic information. By contrast, a GIS includes computer software, hardware, digital data, storage, analysis and displays huge amounts of information. It provides the potential for producing information on a map base, for very specific purposes and it allows more detailed analysis of the spatial patterns of the earth than ever before.

The sky is no longer the limit for map-makers, as satellites orbiting other celestial bodies now send data back to Earth, which can create detailed landform maps and images of planets and moons we are unlikely to see in such detail for real.

Where Has Map-making Got Us?

Maps help us work out where we have come from and where we are going. That was their purpose in 2300BC and is still their purpose today. The main difference is that the Babylonians wanted to know how to reach the closest source of water or food; today we want to know how to get to the other side of the world. Our horizons have expanded enormously in the intervening 4300 years, thanks in no small part to map-makers.

1Also known as cartography.2Which would now be called plans.3The 2nd-Century AD mathematician, whose name is pronounced 'Toll-er-mee'.4As were all forms of printed material.5The Miller Projection is most commonly used now, which reduces the distortion of the polar areas that is a characteristic of Mercator's projection.6And which, incidentally, was used to settle border disputes into the 20th Century.7Initially in hot-air balloons and later in aeroplanes.