The Eiffel Tower, Paris, France Content from the guide to life, the universe and everything 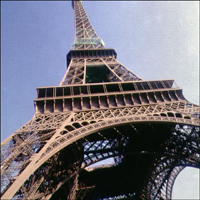 The Eiffel Tower, perhaps one of Europe's (if not the world's) most famous landmarks and tourist attractions, is located in the St Germain district of Paris, France along the Champs de Mars - on the bank of the River Seine.

The Eiffel Tower was built as the entrance arch to the Paris Exhibition of 1889, celebrating the 100th anniversary of the French Revolution. Monsieur Alexandre Gustav Eiffel was the main engineer of the Tower1, and he also helped design the framework for the Statue of Liberty and various other buildings, gaining himself the nickname the 'Magician of Iron'.

Construction began on 28 January 1887, and while being built there were endless efforts by many different groups of people to get the whole project scrapped. One group of Parisian artists called it 'the shame of Paris', complaining about the aesthetics of the Tower - apparently there were concerns that its somewhat phallic shape may cause women to faint in the street, horses to bolt and grown men to weep - and that it was to be the French equivalent of an eyesore. Regardless of some popular opinion, the Tower was opened to the general public on the 15 March 1889, before it was even finished.

Eiffel's comprehensive safety procedures also ensured that no one was killed during construction, however, sadly one worker lost his life while the lifts were being installed. This setback only encouraged the building work further, and the Eiffel Tower was completed on the 5 May, 1889 at a total cost of 8 million French francs! While only meant to be temporary (to stand for 20 years), the City of Paris found its appeal and use as a point of telecommunications far too great to pull the structure down (not to mention the cost of doing so), so it remains to this day, in all its majestic glory.

The Eiffel Tower is a very large iron structure, the base of which 100 metres square, and the tower itself stands 324 metres tall owing to a radio tower and antenna placed at the top in 1959. Before the radio tower and antenna, it was 309 metres tall; at one point it was the highest structure in the world, but lost out to New York's Chrysler Building in 1930. To give it some perspective, if you were to stand the Leaning Tower of Pisa on the Statue of Liberty, on the Great Pyramid of the Pharaoh Cheops, the Eiffel Tower would be taller2.

During a hot day the iron expands so much that the Tower can rise by up to 17 centimetres. Also, owing to its skeletal structure, it moves an estimated 22cm in hurricane-force winds. This is not much at all. There are some 2.5 million rivets in the whole thing, and it weighs over 9000 tonnes. If you were to magnetise it, it would affect electronic circuits for miles around. Unfortunately for all budding trouble-makers, this has been made incredibly difficult with the application of very thick coats of paint. About 45 tonnes of mud-brown paint is applied every seven years, which has kept the structure from rusting.

Because of its height, the Tower has unfortunately been a very popular place to commit suicide; over 400 people have thrown themselves off it since it was built, although wire mesh is now used to keep visitors from doing this3. To get up to the height you want to at the Tower, there are lifts from the ground - one in each of the four 'legs' - to the first level, which is 57 metres above ground, and to the second level, which is 115m above ground. The second level is where all the 'legs' of the Tower are brought together. Then there is a lift to the third level which is 276m above ground. Ordinary visitors cannot go higher than this, but there is the observation deck, lamp and the radio tower and antenna.

Climbing the stairs is not to be taken lightly, especially if you've not a head for heights. The criss-cross ironwork is not particularly solid looking, so if watching your feet as you climb you can see the ground quite plainly, getting further, and further, away. Due to the openness of the design you are also likely to be buffeted by strong winds, not to mention other people as they climb up the stairs with you. It is not recommended that you take small children up the stairs, and while the queues for the lifts (and the price of riding in one) can be large - it is the better way of travelling for the young, or old and frail.

Once you've made your way up the Tower, you may feel the need to have a bite to eat. There is a history of restaurants being available to Tower visitors. Le Jules Verne and Altitude 95 are the current eateries, however, in 1889 there was the 'Russian Restaurant', the 'Flemish Restaurant', the 'Anglo-American Bar' and of course the 'French Restaurant'. The Flemish Restaurant went on to become a theatre in later years, and many people still enjoy travelling up to the second level, either by foot or by lift, for a cup of coffee and a patisserie while admiring the view.

The French, and especially the Parisians, are especially proud of the monument now, as over the years the Tower has been used to hang flags off of, hurl fireworks and other lightshows from, stick giant clocks on, herald in midday with cannon-fire, and other countless publicity events; including 'fun' runs up its stairs (and cycling down them by a journalist who lost a bet with a friend), trapeze artistry, golf drives and even the odd ballet. It has, to the annoyance of some, become a place for advertisers to show off their wares over the years also.

But to show just how important the Tower had become to the French, when the German Army occupied Paris during the Second World War the lift cables were cut mysteriously. When Hitler wanted to go up it and survey the conquered capital, he had to climb the 1,792 steps to the top as replacement parts were impossible to come by to repair the damaged lifts. Then, as the Germans left Paris in 1944, the lifts were back in action almost immediately...

The Tower has also been used for the backdrop, and indeed the setting, for many television advertisements, programmes and films. The likes of Doctor Who, James Bond, Inspector Clouseau, Superman and Carrie Bradshaw4 have all visited the Tower, and its image has made its way into animated films like the Aristocats and Ratatouille - in fact any Paris skyline imagined is incomplete without it5.

Under the Shadow of the Tower

On the ground beneath the Tower many sales people wander about with Eiffel Tower models of varying sizes (and other miscellaneous objects), trying to persuade the many tourists to buy from them. Postcard racks are more commonplace than poodles, there are some typical French cafe tables and chairs scattered about so you can sit and watch the Parisians go by, and many other Paris landmarks are a short walk away - including the Place de la Concorde, the Louvre and Notre Dame Cathedral.

For up to date information on Opening Hours, Entrance Fees, Maps and anything else Tower-wise, the Official Eiffel Tower website can answer many of those sorts of questions. Or you could stop a passing Parisian and ask them.

1Hence the name.2Unfortunately, because of the Tower's elevation, the revolting desire of many a schoolchild (and the odd grown-up) is to climb the tower to a suitable height and either spit, or lob a sandwich, off the side in the hope that the projectile will either hit a passing Parisian on the ground below, or if the urban legend is to believed, knock them unconscious.3Although some have still managed to take their final leap.4The main character from the TV series Sex in the City.5Although, due to zoning laws, the Tower is not actually visible from any tall building in its vicinity!