The Statue of Liberty Content from the guide to life, the universe and everything 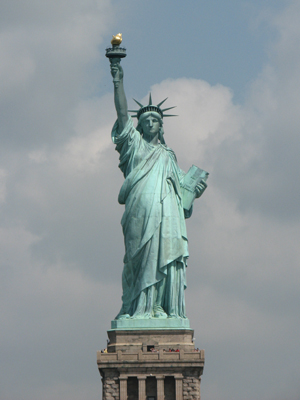 I looked at that statue with a sense of bewilderment, half doubting its reality. Looming shadowy through the mist, it brought silence to the decks of the Florida. This symbol of America – this enormous expression of what we had all been taught was the inner meaning of this new country we were coming to – inspired awe in the hopeful immigrants. Many older persons among us, burdened with a thousand memories of what they were leaving behind, had been openly weeping ever since we entered the narrower waters of our final approach toward the unknown. Now somehow steadied, I suppose, by the concreteness of the symbol of America's freedom, they dried their tears.

-Edward Corsi
In the Shadow of Liberty, 1935

The Statue of Liberty is of course a hugely popular attraction in New York City's harbour, with ferryloads of tourists visiting every day, even in winter, and even those who have never visited it may possibly regard it as in some sense iconic. For many years it has stood as a beacon of hope for immigrants, a symbol of pride for American citizens, and a New York City legend.

The French officially gave 'Lady Liberty' to America in 1886 as a lasting reminder to the people of the friendship that the two nations built about a century earlier, during the American Revolutionary War. They commissioned sculptor Frederic Auguste Bartholdi to begin in 1875 with the name 'Liberty Enlightening the World', and with the goal of completion in 1876, the centennial of the signing of the Declaration of Independence and the birth of the USA.

People may still visit the Statue today, though it is occasionally closed due to various issues of National Security and construction. For more information on accessibility and how to get there, visit this site.

Bartholdi designed her as a Roman goddess, wearing a palla, which is a cloak that is clasped on her shoulder, and size 879 sandals. The pedestal is about the same height as the statue herself. Bartholdi created this statue with a lot of symbolism. The seven spikes in her crown represent the seven seas of the world (Arctic, Antarctic, North and South Atlantic, North and South Pacific, and Indian) as well as the seven continents (Africa, North America, Europe, South America, Australia, Asia and Antarctica).

The 25 windows in the crown represent the natural minerals of the earth. The chains below her feet symbolise the broken shackles of slavery1. Liberty's gaze is eastward, towards Europe, as Bartholdi considered that continent to be less enlightened by liberty than the United States.

The design of the statue allows for inner traffic. People can go up the stairs or the elevator to the crown, where they can see all of the harbour. This is free, when access is available.

There is an artistic end of the statue, and of course, a technical end. The other integral partner in designing the statue was its engineer, Alexandre Gustave Eiffel. Eiffel designed a tower inside the statue that would be connected to the external copper with metal bars. This would support her and help the design in various engineering ways. Eiffel would go on to design the Eiffel Tower.

The statue was formed in plaster, first as a scale model then gradually increased to full size. Wooden patterns were made, conforming to the plaster sections, then sheets of copper 2.5mm thick were hammered into shape against the wooden patterns.

Eiffel's framework was ingeniously constructed using flexible iron bars to allow the statue to sway in high winds yet also to expand and contract, as copper does, with variations in temperature, since in New York winters can be very cold and summers very hot.

For the statue's centenary celebrations in 1986 a complete refurbishment was needed, which included replacing Eiffel's ironwork, now of course badly corroded, with stainless steel. The arm had originally been incorrectly installed, and this needed to be corrected and strengthened. French metalworkers replaced the old flame that had been lit from inside with a gold-plated copper flame lit by reflection, as Bartholdi had originally intended. In any case the original torch was badly corroded as its windows could not be sealed properly.

The incredible statue holds a tablet in her left hand with the inscription: July IV MDCCLXXVI (4 July, 1776 - American Independence day). The massive figure stands about 150 feet, or 46.5 metres tall, from her base to her highest point. Her height from heel to head is about 110 feet or 34 metres. Her total weight is 225 tons, or 450,000 pounds.

Most people know that the statue came from France as a celebration of its friendship with America. However, let us delve a little deeper into the genesis of the whole project and to give due credit to the man whose original idea it was. The original conception was nothing to do with America but was an expression of purely French ideals of the Republic. It came from Edouard Rene Lefebvre de Laboulaye, a French legal scholar and staunch Republican. He found the regime of Napoleon III oppressive and greatly admired the post-Civil War American Republic. What he really wanted was a monument that would revivify and sustain the Republican ideal in France, and it was Laboulaye who first discussed the idea with Bartholdi.

Although such a monument was genuinely meant to be a gift to America, Laboulaye also knew that such a strong assertion of the French Republican ideals of Liberty would not be at all welcome in Imperial Napoleonic France. While Bartholdi was away, looking at various possible sites in America, back in France Napoleon was ousted after France was defeated by Prussia in 1871, and the resulting vacuum was characterised by a struggle between monarchists and republicans for the hearts and minds of the French populace. Laboulaye and his fellow republicans saw such a monument as a way to establish Republican ideals on a firmer footing in France. The plan to build it was announced in 1874 before France herself had become republican once more. Then in the early days of the new French republic the ideals of liberty and freedom were still fragile, and a powerful symbol would be needed to help foster them.

Bartholdi was a committed libertarian and was also inspired by the immensity of the ancient colossi, particularly the Colossus of Rhodes (a huge statue of the sun god Helios) spanning, at least in legend, the entrance to a harbour, and as soon as he saw Bedloe's Island in New York Harbour he knew that he had found the perfect site for this new Colossus2.

The French were to provide the statue, and the Americans provided the pedestal, designed by Richard Hunt. But the pedestal was not ready for the statue, owing to lack of funding. Funds were solicited from private donors, but they were not sufficiently forthcoming. Joseph Pulitzer (for whom the Pulitzer Prizes are named) assisted in fundraising by championing the idea in his newspaper, New York World. He was able to have large numbers of (not necessarily rich) people send in small amounts of money, instead of appealing simply to rich philanthropists. He used his newspaper to voice criticisms for not donating to this cause - that the rich were not donating and the poor and middle-class assumed the rich would.

The statue was completed in France in July, 1884, considerably behind the schedule of July, 1876. It stood in Paris for about a year before it was shipped out to America. The French brought all of the 350 pieces of Lady Liberty over the Atlantic Ocean on the frigate Isere and re-assembled them on their new home in four months. The pedestal was completed in April, 1886. The dedication in October, 1886 was before an audience of thousands, and President Grover Cleveland said-

We will not forget that liberty here made her home; nor shall her chosen altar be neglected.

There were millions in the streets in a parade celebrating the monument.

Bartholdi selected Bedloe's Island for the site of the massive statue. The island was renamed Liberty Island, after the statue, but had gone by many names before. The native Iroquois inhabitants of the area had named it 'Minnissais', meaning 'lesser land'. It had served as a British Naval Commander's home, and it had also been the site of Fort Wood, which was used for protection of the harbour in 1811.

This island was perfect for the statue. However, when Ellis Island Immigration Center opened on nearby Ellis Island, the original meaning of the statue was lost to history. It became a symbol of reaching America - where many hoped to immigrate to - as New York Harbour became the busiest immigration port in the country. However, it was not meant to have such a meaning, but rather to ask the rest of the world to embrace the ideas of the American republic.

Not like the brazen giant of Greek fame,
With conquering limbs astride from land to land;
Here at our sea-washed, sunset gates shall stand
A mighty woman with a torch, whose flame
Is the imprisoned lightning, and her name
Mother of Exiles. From her beacon-hand
Glows world-wide welcome; her mild eyes command
The air-bridged harbor that twin cities frame.

'Keep ancient lands, your storied pomp!' cries she
With silent lips. 'Give me your tired, your poor,
Your huddled masses yearning to breathe free,
The wretched refuse of your teeming shore.
Send these, the homeless, tempest-tost to me,
I lift my lamp beside the golden door!'
- Emma Lazarus

The sonnet 'The New Colossus' was written in 1883 by Emma Lazarus of the statue, but lay neglected. Evidently Lazarus didn't think much of it. At the same time many other artists, including Mark Twain and Walt Whitman, created works to be auctioned off to raise money to build the pedestal for the statue. It was only after Emma Lazarus had died that some of her friends, spurred on perhaps by the opening of the immigration centre at nearby Ellis Island in 1892, arranged to have a small plaque engraved with the sonnet placed inside the statue's pedestal in 1903.

It is because of this, as well as the placement of the statue in New York Harbour - the busiest immigration port of the time - that the image of the Statue of Liberty as a greeting to immigrants was adopted. It was never intended as a lighthouse welcoming immigrants to America3. It was meant as a symbol to the world and particularly to Europe (it points towards Europe not America) of the Republican ideals that America embraced.

The poem contains its own tensions. It refers to 'the wretched refuse', perhaps as an allusion to the misery and, yes, discrimination that those immigrants suffered when they first made landfall. For many of them the streets were certainly not paved with gold, and for many of the native population the shackles of slavery had not been broken. Walt Whitman himself lost his prestigious position as Editor of the Brooklyn 'Eagle' because he dared to speak out against slavery, and he went off to write 'Leaves of Grass'. In the years following the waves of immigration there was an inevitable backlash and laws were passed severely restricting further immigration. Emma's Mother of Exiles could cry out her message only 'with silent lips' - was she, even then, being gagged?

1Though these are not visible to the casual observer on the ground.2This is alluded to in Emma Lazarus' Sonnet 'The New Colossus', mentioning as it does the 'air-bridged harbor that twin cities frame' - the 'twin cities' being New York City, New York and Jersey City, New Jersey.3Other than that it was used as a landmark, guiding ships into the harbour