Ellis Island Immigration Centre, New York, USA Content from the guide to life, the universe and everything 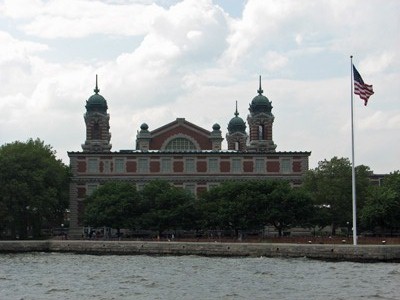 To millions of today's Americans the term 'Ellis Island' refers not so much to the island itself (a small and otherwise uninteresting island in New York harbour) as to the immigration station which opened there in 1892.

In the aftermath of the American Revolution there was a large influx of immigrants into the USA - perhaps as many as 5,000 people every year. But by the early 1900s there were 5,000 people arriving every day.

Immigration to the USA had begun to increase quite substantially during the 1830s, mostly from Ireland, Great Britain and Germany. Passengers simply disembarked at the wharves of Manhattan, New York. But as the immigrants kept arriving and their numbers were increasing, it was decided to establish a receiving centre for them.

This would have a dual purpose. It would be a screening centre, to filter out anyone arriving with a contagious disease and prevent them from entering the country. And it would act as a help centre for the new immigrants, particularly in respect of protection from the robberies, fraud and scams to which new arrivals were particularly vulnerable.

The first centre for processing immigrants to the USA opened in 1855 at Castle Garden (since renamed Castle Clinton), administered by the authorities of New York State. But a remarkable piece of legislation, which had all sorts of far-reaching effects, affected immigration, too.

This was the Homestead Act, signed into law by Abraham Lincoln in 1862, under which private citizens were able to lay claim to a sizeable plot of land on payment of just a few dollars. This Act remained in force until 1976 (1986 in Alaska).

The offer of virtually free land in the land of the free naturally attracted even more immigrants, especially, in the 1860s, from Scandinavia. Then in the 1870s large numbers of immigrants began to arrive from Italy, Russia and Austria-Hungary.

The 1870s also saw the first restrictions on immigration enacted by Congress.

During the 1880s there was an exponential increase in immigration, as millions streamed in from all around the world. The advent of the steamship had reduced the journey time enormously.

During that decade some nine per cent of the entire population of Norway emigrated to the USA. Whole families arrived as a unit, but often a young man would come on his own to find work first. Some of them later sent for their family members to come and join them; others worked hard for a while before returning to their homeland with their savings.

In 1890 the federal government took control of immigration in New York harbour, to the great annoyance of the State authorities, who retaliated by refusing to allow the government to use the immigration centre at Castle Garden. So the government set up a temporary processing centre at the Old Barge Office near the US Customs House at the south-eastern foot of Manhattan Island.

Then they set about converting a small island in the harbour, on which Fort Gibson stood, into the first US federal immigrant reception and processing centre. The island was Ellis Island.

The new centre on Ellis Island opened on 1 January, 1892. It was a timber building, three storeys high, designed to deal with up to 10,000 immigrants per day. The very first immigrant to be processed here was named Annie Moore, a 15-year-old girl from Ireland.

In 1897 a fire broke out. The whole structure burned to the ground, and all the administrative records for this five-year period were lost.

A new Ellis Island centre, costing $1 million, was built from brick and stone and steel. It was designed in the French Renaissance style and opened in December, 1900.

It dealt with 'steerage' passengers (those with the cheapest tickets). In its first full year of operation it processed 389,000 immigrants, peaking at more than one million in 1907 (including a record of over 11,000 immigrants in a single day).

First Class and Second Class passengers were dealt with quickly and conveniently on board ship, so did not need to pass through the Ellis Island centre.

At Ellis Island the immigrants entered the building and climbed the stairs up to the first floor, as doctors watched carefully for mobility problems, breathing difficulties or other signs and symptoms that suggested the need for further medical examination.

This must have been a nerve-racking time for these newcomers. Having endured so much hardship and having come such a long way, it would be terrible to be sent away at this stage, especially if that would mean a family group being broken up.

Although the statistics say that only one to two per cent were refused entry into the USA and sent back to their place of origin, that still means that something like a quarter of a million people had to suffer that fate.

Those who passed the medical were then interviewed and had to answer a long questionnaire about their origin, their destination, their education, skills and occupation (if any) and so on. After all the formalities they could start to look forward to a new life in the New World.

In the early years of the 20th Century, immigrants of all nationalities and races were crowded together in the mean streets and tenements of Lower Manhattan. It is commonplace nowadays to hear New York City described as a melting-pot, but the term was first applied in this context by an Englishman in 1908. The playwright Israel Zangwill (1864 - 1926) wrote a play of that name, with this line:

America is God's Crucible, the great Melting-Pot where all the races of Europe are melting and re-forming!
- The Melting-Pot, Act I

The First World War (1914 - 1918) considerably reduced immigration, and Ellis Island was used during this period as a detention centre for enemy aliens.

Then during the 1920s laws were passed restricting immigration. Quotas were introduced, based on national origin. Immigration processing tended to be carried out at consulates in the country of origin rather than on arrival in the USA. Ellis Island was used mainly as a deportation centre, as well as a coastguard station.

After World War II, during which Japanese, Italian and German aliens were interned there, Ellis Island finally closed down in 1954. The main building was later restored, and in 1990 opened to the public as an Immigration Museum.

It is estimated that at the start of the 21st Century there are more than 100 million Americans whose ancestors came through Ellis Island. That is about one in three of all Americans.

Some of these ancestors were fleeing hunger and starvation. Some were escaping from religious or political persecution. Some were looking for an alternative to unemployment and poverty. Some came simply to join family members already in the USA.

Others relished the wide open spaces, the availability of land, or simply the attraction of making a new life for themselves in a land of opportunity. Yet others came looking for gold.

As President JF Kennedy wrote in A Nation of Immigrants, 'There are probably as many reasons for coming to America as there were people who came'.