The Leaning Tower of Pisa Content from the guide to life, the universe and everything 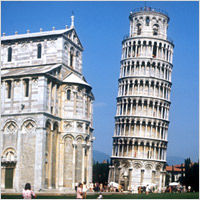 The city of Pisa, situated in the Tuscany region of North West Italy, near the mouth of the river Arno, is nowadays best known as the site of the world's most famous leaning tower. This has not always been the case. First settled around 1000 BC, the city flourished under the Romans and then the Lombards1. By the 11th Century AD, Pisa had established itself as one of the flourishing maritime republics of the time (along with Venice, Genoa and Amalfi). Pisa's 'empire' expanded after a war with the Saracens won them Corsica, Sardinia and the Balearic Islands. This was to be the high water mark of the city-state and after wars with Genoa and then Florence in the 15th Century, Pisa found itself just another city under the Florentine sphere of influence. Luckily for Pisa's tourist-industry, the tower survived the mayhem raging about and through the region.

The Leaning Tower or, as the Italians know it, La Torre Pendente, lies on The Field of Miracles (Campo del Miracoli) and is the most impressive monument among a collection of stunning works. Other notable monuments situated nearby include the Baptistry, the Duomo and the Camposanto (a marble walled cemetery).

Commissioned in 1173, work on the tower was begun by an unknown architect. Almost as soon as the foundations were completed, the now famous lean became evident. By 1185, when the tower had reached four floors in height, construction work was halted. This pause is not very well documented, but is thought to have been initially caused because one of the many wars with Florence meant resources were needed elsewhere. The year 1198 brings documentation of a bell ringer in the tower.

Work restarted in 1260. This time under the supervision of Giovanni di Simone. He worked on the problem of correcting the inclination until 1278, when again there was a pause in construction. Eventually, Simone took the tower up a further three floors and in 1284 the six gallery floors were added. The tower was completed in 1360 by Tommaso Pisano, who added the belfry.

The tower is 56 metres tall and weighs an estimated 14,453 tonnes. It has 293 steps leading to the top, is made of white marble and is decorated with numerous carvings of ships. The decorations help celebrate Pisa's early status as an important port. Pisa is not a seaside town today due to successive layers of silt moving the coast-line back a number of kilometres.

The lean is due to the unstable sandy nature of the ground the original foundations sit in. In the beginning, the lean increased at the slowish rate of approximately 1mm per year, but in the last few decades leading up to the tower's closure to the public in 1990, the lean was increasing at the more alarming rate of up to 1mm each week. At the time of the closure it was generally thought that the tower would collapse without intervention.

Through the centuries, a number of projects have been implemented to stop the tower's lean, including - to no avail - Giovanni di Simone's attempt to build his sections of the tower in the opposite direction to the inclination and a foolhardy attempt in 1934 when cement was injected into the base. This poorly-thought-out project had the undesirable affect of accelerating the speed at which the lean increased.

In 1999, a scheme was implemented which would finally stabilise the tower. The thinking behind this plan - that relied heavily on the use of modern-day computer-generated modelling technology - was to retain the famous lean for tourism needs but to stop any additional slippage. To do this, 600 tonnes of lead weights and steel guide cables were attached to the tower as counterweights and supports. The soil under the weighted side was then removed. The tower then moved slightly back towards the vertical. At its most perilous angle it had been five metres off vertical. The undermining brought it back 45 centimetres in the opposite direction.

The Leaning Tower of Pisa has now been judged stable, or perhaps in the context of Pisa's heritage, shipshape would be a better description. Reopened to the public on 15 December, 2001, conservation and safety controls now mean parties of no more than 30 people are allowed up the monument at any one time.

1A Germanic tribe which settled in northern Italy in the 6th Century.