Using the Sun to Orient Yourself Content from the guide to life, the universe and everything 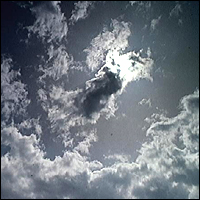 So at 9am (GMT) the Sun will be exactly southeast.

It is important to note that all times in this article refer to solar time - that is, midday is taken as being when the Sun is at its zenith. In some places this may differ by several hours from 'official' time, due to Daylight Saving Time and/or extended time zones to keep a large country on the same time.

With a little practice, it should be possible to take a fairly accurate reading knowing the time but without using a watch directly. It is a good idea to take a moment to think about the direction you have produced, to avoid silly errors.

It is possible to navigate using the stars, but this is a much more complex skill. The constellation Orion is usually near the equator, but this varies greatly according to the time of year. Polaris (alpha Ursae Minoris, the North Star) and Crux (the Southern Cross) are good year-round indicators if you can locate them.

Navigating accurately using the Moon is impossible for all practical purposes. Even a rough direction requires knowing the times of moonrise and moonset. Add to this the fact that on most nights there will be a period where neither the Sun nor the Moon is visible, and the advantages are very small. If necessary, the same rules listed for the Sun may be applied if you know the local 'lunar time' (time based on when the moon is at its highest) rather than 'solar time'.

Other Handy Indicators of Direction

Moss grows in the shade, so it will favour the north side of trees in the northern hemisphere. However, in generally overcast places, such as woods, this may not be detectable. Longer branches on trees may also grow towards the equator in strong sunlight. Communication satellites must be in geostationary orbit, so satellite dishes will face a point directly over the equator, as will solar panels. This can be a useful indicator of general direction if you are well outside the tropics.

While this will never be an exact method for travelling accurately across featureless wastes, it does provide a quick and (with practice) simple method of checking that you are heading roughly the right way. There is no shame in using another rough method to back it up - for example, if you know you are in a city with a north/south/east/west street grid, it becomes very simple to check you are heading in the right direction.

1When dealing with compass directions, 'due' means 'exactly'.2Solar time is defined by midday being the point at which the Sun is at its highest in the sky. Note that some countries or groups of countries that overlap a time zone may vary from this by several hours in order to have an internally consistent time.