Screen-readers and Speech Synthesisers Content from the guide to life, the universe and everything 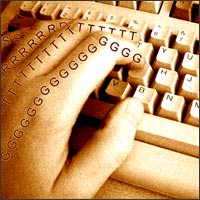 A screen-reader is a program mainly used by blind, partially-sighted or dyslexic individuals to enable them to access computers. In simple terms, a screen-reader consists of two parts; the speech synthesiser which produces audible speech; and the screen-reader software itself which sends the appropriate information from the visual PC screen to the synthesiser.

A screen-reader lets a blind user select and read those sections of the screen he or she wants to hear. For example, sighted users stop reading a menu when they come to the item they want, or stop reading a webpage when they reach the link they are after; users of screen-readers use them to silence the synthesiser's output when they've heard it. The ability to filter out irrelevant information is often as important as the ability to hear relevant information.

The screen-reader software is adaptable to a user's needs; the speed of the voice, pitch, the way it announces punctuation and other aspects of the sound can all be easily changed. For example, the software can be set to announce each key as it is pressed - useful for less confident touch-typists - or to announce each word as the space bar is pressed, or when the 'Enter' is key hit. Alternatively, many confident touch-typists will turn off the speech altogether when typing for prolonged periods so that the speech does not speak the words or letters as they type. The text written on the screen can be reviewed using the up and down cursor to read a line at a time, or 'Ctrl' and cursor left or right to read a word at a time, and other such functions to read paragraph at a time, or read the entire document straight through. The screen-reader software also contains functions that enable the user to read specific aspects of the screen, such as the title bar, the suggested correction in a spell-checker, or the contents of a specific cell in a spreadsheet. For example, with JAWS (a particular type of screen-reader), Insert with the letter 'T' will read the title of the current screen area, or webpage, whereas Insert with the letter 'F' will read out font details such as size and font type.

Screen-reader users use 'keyboard shortcuts' built into the operating system (which most PC users are unaware of) to perform functions normally done with the mouse. So, pressing the Alt key with the letter 'F' brings up the file menu, whereas the Alt key with E brings up the edit menu, and so on. Similarly, pressing the Tab key will move the user through a webpage a link at a time, or cycle through availible buttons or tabs in other situations, while Shift with Tab cycles back the other way. Rather than clicking the mouse button to open links, to check/uncheck select boxes, or to activate buttons, pressing the Space Bar or Enter will do this for the screen-reader user.

Screen-readers are not only useful for people who are visually impaired but are increasingly used in situations where people are unable to look at a computer screen, such as in the dark, or even for in-car computer systems.

Video displays were first used with computers in the early 1960s but did not become common until the early 1970s. Early terminals used a printer rather than a video screen for output; text was a one-dimensional stream of 'scrolling' text which could be fed into a speech synthesiser connected between the computer and terminal. The only problem was that the user had no way to re-read text that had already been spoken.

The real development in screen-readers, however, began in 1982 with the release of IBM computers; these provided a standard interface for connecting external devices, combined with a standard operating system and the possibility of installing much more memory with which to run more powerful software, including screen-readers. By the late 1980s, several screen-reader programs were commercially available, including Enable Reader, Soft Vert and the Enhanced PC Talking Program.

Probably the most famous user of synthetic speech in the world is Dr Stephen Hawking, Lucasian Professor of Mathematics at Cambridge University. He uses the DECtalk speech format synthesiser which gives him his distinctive voice. He tried a newer one a few years back but he didn't like it, as the synthetic DECtalk voice had over the years obviously become his own.

Dolphin Computer Access2 who used to make the Apollo II also produced a PCMCIA synthesiser version of the larger desktop equivalent, called Gemini, which could be plugged into the PCMCIA socket on a laptop. These, like the Apollo II, had a headphone socket, but because of their very much smaller size did not have a built-in speaker, though one could be attached externally to the card.

From the late 1990s onwards, software synthesisers became the most popular option for synthetic speech used with screen-readers. The main reason for this was the expense; rather than having to pay a lot of money for a bulky external device, a standard Windows soundcard was able to produce equal or better-sounding quality of speech.

Eloquence is a software synthesiser that can be used with several screen readers including JAWS, while Orpheus is used by Dolphin computer Access with their screen reader, Hal.

There are several screen-reading programmes on the market currently and while most individuals have a preference for one of them over the others, this is mainly due to personal choice and largely because once you becomes familiar with one particular package it is then a very steep learning curve to change over to another company's product.

The two main screen-readers on the American market are Job Access With Speech (JAWS) produced by Henter-Joyce, a division of Freedom Scientific, and Window-Eyes, produced by GW Micro Inc. These two screen-readers are also common in the UK, with a third UK-based company Dolphin Computer Access screen-reader Hal probably being equally as popular as JAWS. Window-Eyes is in third place.

Hal Screen-reader and other products

The screen-reader that runs with the Orpheous software synthesiser (and can be used with the Eloquence engine too) is a UK-manufactured one called Hal, by Dolphin Computer Access. One of the big advantages of Hal is that users with some useful sight can use Hal in combination with Lunar Screen Magnifier, or purchase Supernova, a combined screen-reader, with magnifier and increased support for braille displays. With Supernova, users can have speech, magnification, or braille output (if they have a braille display), or any combination of these three. In addition, Dolphin Computer Access produce Lunar+, which they describe as a 'Screen Magnifier with entry-level speech'; this, while largely similar to the Lunar Screen Magnifier, also includes a simplified screen-reader to enable elements of the screen to be read aloud to those with some useful vision when, for example, prolonged use of the PC has made the user's eyes tired.

Window-Eyes is another screen reader, which is compatible with a wide range of speech synthesisers. Many users of Window-Eyes claim it to be a more stable piece of software than, particularly JAWS, and it reputedly suffers from less crashing which is often a problem with JAWS and other screen-readers. Both Hal and Window-Eyes have suffered in the past from criticism over their poor performance with the Internet, but recent reviews would seem to suggest that now all three - JAWS, Hal and Window-Eyes - offer comparable access to the Internet. Such reviews have also tended to support the view that Window-Eyes is a more stable piece of screen-reader software than JAWS in particular.

Although this article has focussed on software such as JAWS, Hal and Window-Eyes, these specialist software packages are extremely expensive and cheaper alternatives exist on the market. However, these cheaper alternatives, often termed 'Text To Speech' systems, although they may be sufficient for some users, do not necessarily enable full functionality of the PC to be accessed. For example, Lookout is an inexpensive screen-reader, which claimes to provide access to many programs on the PC including Internet Explorer. The quality of the speech is as high as other screen readers discussed above, as it uses similar software synthesisers through the PCs soundcard. Unlike JAWS, Hal and Window-Eyes, Lookout has an interesting feature that means it plays musical tones while you move the cursor or mouse-pointer. These tones provide spatial information on where you are on the screen; raising pitch indicates the cursor/mouse-pointer is moving up the screen, and descending pitch indicates you are moving down the screen. Whereas JAWS, Hal and Window-Eyes can cost the best part of a thousand pounds (or more), Lookout is retailed for a little over a hundred pounds in the UK, with the version compatible with Windows 98 retailing for £80.

Over the past few years mobile phones have become more and more complex and many now have internal memory that the user can access. Because of this, and because blind/visually-impaired mobile phone owners want to be able to use text messaging and access their phone books and so on, two pieces of software now exist that can produce synthetic speech through the mobile phone's speaker. These screen-readers for mobile phones are limited by which models and makes of phone they work on, with most Nokia series 60 and some series 80 phones being supported by the software.

The first phone which could be used with speech was the Nokia series 80 mobile/PDA the Nokia 9210 and the 9210I. The software that allowed these phones to be used by the blind is called TALKS, and TALKS has now extended the number of phones it works with to include most of the Nokia series 60 phones on the Symbian opperating system. TALKS, like JAWS, uses the scansoft Eloquence speech engine, and for individuals who have used JAWS, the software has many similar aspects that makes learning to use it very easy indeed.

Mobilespeak is another piece of software which works on certain mobile phones as a screenreader. With TALKS (or Mobilespeak) installed on a mobile phone, a blind user can read through, and write and send text messages, access the calendar and address book, and use all the features of the phone such as media player and web browser. Many of the mobile phones can also run GPS software, and TALKS in particular supports certain GPS packages on the mobile phone.

Another recent development in screen-readers is the release by Dolphin Computer Access of a screen-reader capable of working on most Windows-based PDAs. As for the speech software on mobile phones (which often have many features in common with PDAs), this can open up high street PDA devices to the blind in a way previously not available. However, with the software costing over £300 in the UK, it is an expense often above the price of the PDA itself which must be incurred in order to enable the device to work.

There are two main problems with braille displays: firstly, the user has to move their hand or hands off the keyboard in order to read the display. Secondly, the main problem is their price, which puts them beyond the means of even relatively wealthy individuals.