Pronouncing British Placenames Content from the guide to life, the universe and everything 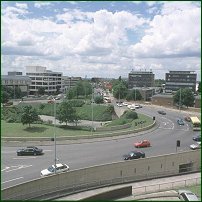 When travelling around Britain, there are few things more embarrassing than mispronouncing place names. The reactions you get will be unpredictable, to say the least. These range from incomprehension and disbelief...

...to shame and merciless public ridicule...

I don't know what he's saying, Betty. Are you all right, love? Shall I call t' doctor?

It may have been adopted as the language of global commerce, but for all its widespread use and massive vocabulary, English has one small flaw - you often don't pronounce it as it's written. And if that wasn't enough, there are countless British placenames rendered in Welsh, Gaelic, Cornish and Scots, and a sprinkling of local dialects to boot.

This entry cannot provide a comprehensive guide to pronunciation, but it highlights a few potential traps for the traveller to these isles. Don't think that the natives find it any easier - they will learn just as much from this guide.

English has all manner of ways to pronounce the sequence of letters 'ough'. As a native speaker, this researcher can only guess at the difficulty that awaits those who attempt to vocally render the likes of 'tough', 'through', 'though', 'thought', 'thorough' and 'trough'.

In Old English, burg, or burh meant 'castle' or 'fortified house', and the term lives on today in the suffixes -borough, -burgh and -bury. The first two of these should be pronounced 'buh-ruh', rather than the American 'burrow', and certainly not 'burg'. Examples are Peterborough, Scarborough and Edinburgh.

Apart from this suffix, the 'ough' sequence varies as much in placenames as it does in other English words, and you will just have to learn them one by one. This is best illustrated with three districts of Milton Keynes: Loughton (low-ton), Broughton (braw-ton) and Woughton (woof-ton). Slough rhymes with cow, and not cuff, as does the hill on Bodmin Moor, Rough Tor. Finally, Loughborough (luff-buh-ruh) has the sequence not once but twice; common mispronunciations of it include 'loo-burroo' and even 'looga-burrooga'.

The Old English caester means 'fortified town', originally coming from the Latin castrum. Of the numerous place names derived from this suffix, many are easy to pronounce, like Chester, Manchester1 and Lancaster. Exeter (ex-et-er) too derives from caester; it's easy to pronounce, so long as you remember to stress the first syllable, although the local accent renders it nearer to 'eggs-edder'.

Things get difficult when the suffix is -cester. Often a syllable is removed, as in Leicester (les-ter), Gloucester (glos-ter), Towcester (toaster), Bicester (bis-ter) and Worcester (wuss-ter - the first syllable rhymes with 'puss'). Sadly, there's always an exception - Cirencester (siren-sester).

A similar thing happens with names derived from mynster, the Old English word for a monastery church, affecting towns such as Beaminster (bemster) and Leominster (lemster).

The suffixes -wich and -wick derive from the Old English wic, meaning a hamlet, village or town. It also meant 'dairy farm', a derivation which lives on in Gatwick, literally 'goat farm'. Place names ending with these suffixes should ring alarm bells, however. Fans of the American singer Dionne Warwick may be surprised to find that the town of Warwick is pronounced 'worrick'. Others to watch out for include Berwick-upon-Tweed (berrick), Keswick (kezzick), Alnwick (annick), Hawick (hoyk), Greenwich (grennitch) and Norwich (norritch) - although locals would rhyme the latter with 'porridge'.

Vowel shifts aren't consistent, either. In Sussex, you pronounce Uckfield as you'd expect, but prefix with a C and you get Cuckfield (cook-field). In Kent, the neighbouring towns of Tonbridge and Tunbridge Wells are both initially pronounced 'tun-bridge'. In Oxfordshire, Didcot has dispensed with the final vowel completely, being pronounced 'did-ct', while the river Cherwell is 'char-well'.

You'll occasionally find towns where nobody can agree. Shrewsbury divides the locals into three camps, 'shroze-bree', 'shrooz-bree' and even 'shooz-bree'. Holborn in central London has for many years been pronounced 'hoe-bun', but having so few local residents to preserve this, it's rapidly changing to a more natural 'hol-burn'.

Leave It To Belvoir

Over many hundreds of years, place names gradually change, both in spelling and pronunciation, and the tendency is to render them in a form which is easier to pronounce. Some names were introduced after the Norman conquest, but the French sounds didn't integrate well, as seen in Beaulieu (byoo-lee), Belvoir (beaver) and, the former home of the Royal Observatory, Herstmonceux (herst-mn-soo). The village of Furneux Pelham begins with a delightfully rude-sounding 'furn-ucks'.

Cornwall has always considered itself a state independent from the rest of England. Car stickers and flagpoles proudly display the black and white cross of St Piran, and even though the Cornish language died out in the 18th Century4, some of the words live on in placenames. Most are easy to pronounce, but there are a few to trip you up and reveal your emmet5 status.

Top of the list is the intriguingly-named fishing village of Mousehole, pronounced 'mou-zl', where the first syllable rhymes with 'cow'. Others include Fowey (foy), and Launceston (lance-son).

Crossing the river Tamar (tay-mar) into Devon, take care with Torquay (tor-key) and Teignmouth (tin-muth). In fact, most places ending in '-mouth' are pronounced '-muth', like Plymouth (plimmuth), and elsewhere Portsmouth and Bournemouth. The exception is Tynemouth which is pronounced 'tine-mouth' in full. A similar thing occurs with places beginning with 'South'; Southwell in Nottinghamshire is pronounced 'suth-ull', but compare this with Southall in London, pronounced 'south-all' in full. Southampton is pronounced with an extra H (south-hampton), but Northampton (north-ampton) is not.

The North of England is a particular hotspot for linguistic inconsistency. In the Peak District, we find Tideswell (tids-ull) and Vivienne Westwood's birthplace, Tintwistle (tinsel).

Across to Yorkshire, we find Keighley (keith-lee), and Great Barugh which conjures up a certain mental picture when you learn to pronounce it as 'great barf'.

The very Cornish-sounding village of Torpenhow in Cumbria is oddly pronounced 'tre-penna'. It has a very unusual derivation - each of 'tor', 'pen' and 'how' means 'hill' in a different dialect, making it 'hill hill hill'6. There's even a Torpenhow Hill nearby.

Into Wales, where the culture and language of the Celtic race still thrives. If you can speak Welsh, then you should not have a problem with place name pronunciation, but those who can't will have particular difficulty forming some of the sounds.

Many Welsh names are prefixed with 'llan', meaning an enclosure or church. The 'll' sound is a kind of breathy 'hh' or 'hl' made with the tongue touching the roof of the mouth. Other surprises include 'u' which sounds like 'i' in 'big', 'f' like 'v', 'dd' like 'th' in 'the' and 'y' like 'oo' in 'pool'. Some of the more difficult ones to tackle are Llandudno (hlan-did-no), Pwllheli (poohh-helly), Caersws (car-soose), and Ponciau (ponky).

Wales also boasts one of the world's longest and most unpronounceable place names, a browser-unfriendly 58-letter epic, which we shall refer to here as Llanfair PG (hlan-vire PG), its accepted abbreviation.

The Scots too have one very non-Anglo-Saxon sound - the rasping 'ch' best known in the word 'loch'7. Sassenachs8 will fail miserably to correctly vocalise such Caledonian gems as Auchtermuchty and Ecclefechan, but there are no particular tricks to those, so long as you have a few generations of Scots blood behind you.

And Finally, the Serious Stuff

You shouldn't need a university degree to tackle the harder ones in this section, although it may help you to pronounce the Cambridge colleges Magdalene (maudlin) and Caius (keys). We'll start our masterclass in Kent with Wrotham (root-um) and nearby Trottiscliffe (tross-lee) and Meopham (meppam).

East Anglia has a serious case of stolen syllables, the best-known being Wymondham (wind-um), Costessey (cossy), Hunstanton (hunston), and Happisburgh (hays-bruh). Further north, the Cheshire village of Cholmondeley is pronounced 'chum-lee', as popularised by comedian Harry Enfield in his sketches featuring a Mr Cholmondeley-Warner.

Silent 'K's are often difficult to spot, so beware of Prinknash (prinnish) in Gloucestershire, and Puncknowle (punnel) in Dorset, but we'll end with the delightful Devon village of Woolfardisworthy, near Barnstaple, pronounced with an impressively economical 'wools-ree'.

1The 'Man-' in Manchester derives from the Celtic Mamucio, which in turn may come from mamm - a breast-shaped hill.2Keynsham, near Bristol, is also the title of an album by the Bonzo Dog Band.3That's Ely in Cambridgeshire, but Ely in Wales is also pronounced 'ell-eye', from its Welsh name, Trelai.4Attempts are being made to revive it.5Emmet, like grockle, is a derogatory word used in the region for a tourist.6Although A Dictionary of British Place-Names (AD Mills, OUP, 2003) prefers 'Ridge of the hill with a rocky peak'.7Some texts write this sound as 'kh'.8Those folk to the south of Hadrian's Wall.