Nottinghamshire, England, UK Content from the guide to life, the universe and everything 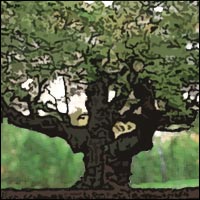 Nottinghamshire (or Notts) lies in the eastern-central area of England (also known as the East Midlands) and has sometimes been referred to as 'the heart of England'. The county borders South Yorkshire, Lincolnshire, Leicestershire and Derbyshire. The actual shire of Nottingham was created between the late 9th Century and the early 11th Century, being given county status by King Henry VI in 1448. The central city of Nottingham that gives its name to the shire, was originally known as Snotengaham1. The Normans later dropped the embarrassing 's' and the city became Nottingham. Most famous for the legend of Robin Hood and his adventures around Sherwood Forest, Nottinghamshire has much more to offer than 'merry men' and evil sheriffs. With a population of about 1,029,3002 the county has a very high female to male ratio with much being said of the natural beauty of the local women. Confined to an area of around 2,160 sq. km, the scenery is best looked out upon from atop Newtonwood Lane, the highest point in the district at 204 metres (669 feet).

The major cities within Nottinghamshire are:

Nottingham, given 'city' status in 1897, is the county centre. Much of Nottinghamshire's attractions are to be found in the city with Nottingham itself having a fascinating history. More can be discovered by visiting the city, either on a day trip or for a longer period, using it as a base of operations when travelling around the rest of the county.

Most famous for its castle, Newark (or Newark-on-Trent) is also a market town and offers antiques alongside other decently priced commodities. Originally a centre for the wool and cloth trade in Nottinghamshire, it was later industrialised with an iron works, a sugar refinery and brewing companies established. During the English Civil War, Newark was a mainstay of the royalist cause, the King having raised the standard in nearby Nottingham. Under siege many times during the war, Newark only surrendered when ordered to by King Charles I. The church of St Mary Magdalene in the town was also said to be the marriage place of Robin Hood and Maid Marian; and W E Gladstone, later UK Prime Minister, was once MP for Newark. Sometimes home to many 'travelling' families, the town also provides an insight into true Nottinghamshire culture.

A market town taking its name from the nearby river Maun, Mansfield is a working class colliery town with a decent football side and some of the best curry houses in the country. It has often been bemoaned by many, including writer Daniel Defoe3:

I came to Mansfield, a market town but without remarkables.

However despite such bad press, the town was once capital of the Royal Forest of Sherwood and nearby lies the ancestral seat of Lord Byron, Newstead Abbey.

Worksop is known as the Gateway to the Dukeries, so called for the number of ducal residences in the area such as Clumber Park, Thoresby Hall and Wollaton Hall and Park. Discovery of coal seams in the early 19th century created large collieries and much industry for the town, until the early 1990s when the coal seams dried up. The town was also the setting for the children's television show, Maid Marian and her Merry Men, where it was depicted largely as a mass of mud. Those tiny cubes that make gravy, Oxo, are also manufactured in Worksop by Campbell Soup UK.

Travel within Nottinghamshire is fairly standard. Road4, rail and air can bring you into the county, while in Nottingham itself, there is a modern tram system in use5. If travelling by car to Nottingham, the issue of parking is important. A well established 'Park and Ride' system enables easier commuting to inner city businesses and there is also reliable public transport in situ, the two major bus companies being Trent Barton and Nottingham City Transport6. A number of taxi fleets operate within the city and county also.

Nottinghamshire has a wealth of historical landmarks, many in the city of Nottingham itself. There are numerous connections to royalty, literary figures and sporting greats.

Nottinghamshire's prosperity originally depended greatly on the River Trent and Trent Bridge. As well as being used for transporting materials and finished goods, an additional source of income was gained by charging tolls for people travelling across the Bridge. Coal, wool dyeing, ceramics and brewing were some of the county's earliest industries.

By the mid 18th century Nottinghamshire had a thriving textile industry, but the lace trade soon gave way to coal mining, with large deposits found throughout the county, particularly near Mansfield and Worksop. Entire communities flourished from the rich deposits, but it was not to last.

The BBC has its East Midlands headquarters in Nottingham. ITV also operated from Nottingham (Lenton Boulevard, Beeston), up until early 2005 when the company closed down its studios there and moved to Birmingham. The ITV studios once had the ostensibly prestigious Crossroads in production along with some mostly forgettable sitcoms and cooking shows. A number of radio stations also broadcast across the county, the most popular being BBC Radio Nottingham and Trent FM. There are several newspapers running in the county, the largest being Nottingham's Evening Post.

The people of Nottinghamshire have always been proud of their sporting achievements, and rightly so. The following teams and arenas are the major ones:

Other tourist attractions in the area include:

The old joke about yoghurt8 is rife within the county, but with a large student population9 and a wide range of events, attractions and venues, there are many opportunities for culture vultures to indulge in the finer things in life...

Nottingham City has several indoor shopping centres, including the vast Victoria Centre, the Broadmarsh Shopping Centre, and the Exchange Arcade. It's also worth spending a little while pottering around the many shops in the Hockley Village area.

Outside of Nottingham, the market towns of Mansfield, Eastwood, Retford, Worksop, Newark and Southwell offer anything from fresh fruits to imported luxuries10.

Places to Eat, Drink and be Merry11

Places to eat in Nottinghamshire are wide and varied. In Nottingham itself there are many establishments to choose from, an assortment follow:

Due to a large amount of nightclubs, bars and other such venues, the city of Nottingham has of late earned a reputation as one of the Stag and Hen Night capitals of England. It is also popular with students and sporting clubs' end-of-season parties. An ever-changing selection of drinking establishments are to be found in Nottingham, some good, some okay and some downright horrific. A selection of each follows:

The Okay: The Irish (you MUST either already be drunk, or work/study locally to drink here), Rock City (or as it is known locally Rock Sh**ty), Temple Bar, Goose on the Square, Walkabout (Aussie theme pub), Bar Oz, Reflex, Rose and Crown (usually full of staff and students from the Queens Medical Centre and the University), Bar Humbug, The Bell Inn, Jumpin' Jaks (VERY noisy, but a laugh), The Sir John (good 'meeting before clubbing' pub), the Rig (next door to Rock City), Jongleurs, Pit & Pendulum (for the Goths), Media (for dance), Squares and the Ropewalk.

The Bad: Long Island (expensive, expect your drink to be spiked or unexpectedly snog an underage drinker), Ocean (more of the former), Number 10 ('chav' city), Yates (expect a fight), Liberty's, The Palais ('grab a granny') and Isis.

Nottinghamshire has its fair share of famous (and infamous) people, these being some of the more well-known:

1Literally translated from Anglo Saxon as 'the home of the people of Snot'.2Census, 2003.3Author of Robinson Crusoe.4The M1 Motorway and A52 feed into the county.5And being further developed to include not just Nottingham City but other outlying boroughs.6A minor point is that Trent Barton will give you change, NCT ask for exact fare.7Raleigh Cycles ensured Nottinghamshire became the centre of the UK bicycle industry by procuring most of the UK bicycle industry including Humber, Rudge-Whitworth, BSA, Phillips, Sun, Norman, Hercules and Moulton and until recently, Sturmey Archer, makers of the classic 3-speed hub gear. The company dissolved in the late 1990s being bought by rival American companies, although the name lives on.8If you don't know it, it goes something like - 'the only culture in Nottingham is in the yoghurt'. Yes, hilarious.9Each year sees an intake of around 10,000.10Including such delights as carpets, perfumes, silks and wines.11Men, Women or otherwise.12Yes, it IS a place to eat, drink and watch women with large breasts parade about.13There is evidence to suggest he was actually a Yorkshireman.