Torvill and Dean Content from the guide to life, the universe and everything 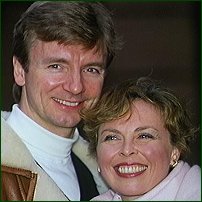 Jayne Torvill and Christopher Dean are not just any old ice-dancers1. They have won medals in national and international competitions, competed in the Winter Olympics, performed professionally for ten years, been awarded OBEs2, and are probably the most famous thing to come out of Nottingham since Robin Hood.

Torvill began to learn skating in 1965, aged eight, after a school trip introduced her to the activity. She became the British National Pairs Champion in 1971 with Michael Hutchenson.

Dean began to skate in 1968, aged ten. His first competition was a short three years later, in partnership with Sandra Elson.

In 1975 neither skater had a competition partner. Janet Sawbridge, their coach, paired them up and they first competed together in 1976. It was clear that they worked well together. Over the years, they earned a string of medals in various high-level competitions:

By this point they had become unstoppable. Leaving their jobs in order to skate full-time was not an easy decision, as it meant adding to the then two million unemployed in the UK. They applied for funding to, among others, Nottingham City Council, who granted them £14,000 per year until the next Olympics3. Over the next five years they placed first in the European Championships three times and the World Championships four times - consecutively. It was in these competitions that their style changed from traditional dance to more narrative performances.

The next challenge was the 1984 Sarajevo Olympics. The money from the Council allowed them to train in Germany with their new coach, Betty Calloway.

Bolero, by the composer Ravel, is probably the most famous ice dance ever. Torvill and Dean had been using the piece as a warm-up. When they decided to use it in for their 'free dance' piece, it needed shortening from the original 17 minutes to no more than 4 minutes 10 seconds.

Unfortunately, the shortest it could be reduced to was 4 minutes 28 seconds.

This posed a problem, and the iconic beginning to the dance is the solution to it. The pair start on their knees, and the first blade does not touch the ice until 18 seconds after the music begins, when Torvill is lifted over Dean's shoulder. The clock only starts once this first blade has made contact - neatly side-stepping the rules and allowing the music to be used4.

Torvill and Dean's dance to the Bolero received 12 6.0s out of a possible 18, with the other six marks all being 5.9s. This included nine 6.0s for artistic impression - a perfect score.

Unsurprisingly, Torvill and Dean won the gold. That same year, they went on to receive another 13 6.0s at the World Championships, bringing the total of 6.0s the performance had earned them up to 42. Finally, they were jointly made BBC Sports Personality Of The Year.

When you've achieved perfect marks in the Olympics, what do you follow it with?

If you're Torvill and Dean, you turn professional. Over the next ten years they held a sequence of international tours, some as part of existing companies, others independently. Bolero almost always featured, somewhat to the dismay of the skaters, who would have liked a little more variety. Christopher Dean particularly wanted to be more experimental in his choreography, but feared that 'the audience base wouldn't support it.'

In 1994 the pair decided to return to competitions, entering the Lillehammer Olympics. Their free dance was a return to the traditions they had been instrumental in changing. It had no narrative or theme, but was simply a spectacular display of skill. The legality of one move, an assisted lift, was challenged, which contributed to a disappointing bronze medal.

For several years after Lillehammer Torvill and Dean continued to perform professionally and choreograph other couples for competitions. In 1999, they announced their retirement and the end of their partnership. Both worked as coaches; Dean also choreographed.

However, the pair were persuaded to work together once more for the ITV show Dancing on Ice in 2006, despite having doubts that the show would be successful. The second series began in early 2007, again with Torvill and Dean coaching and choreographing the celebrity participants, and the show will be touring the UK with celebrities from both series taking part.

1Ice-dancing is ice skating to music.2Order of the British Empire.3This was unpopular with some residents, although curiously their opinions changed after Sarajevo.4The rules have since been changed to prevent this trick being repeated.