Nottingham Castle - Museum & Art Gallery Content from the guide to life, the universe and everything

Nottingham Castle: Museum & Art Gallery | From Normans to Tudors | From Stuarts to the 21st Century 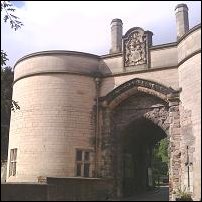 ...that extraordinary trademark of a dolls house swimming in chocolate fudge with Nottingham Castle written underneath...
- from the James Bond novel Thunderball

Many visitors to Nottingham Castle are often disappointed when they don't find the romantic image they have in their heads of a huge formidable fortress, complete with battlements, arrow-slits, moat and drawbridge. Ian Fleming's description above was of an image found on John Player cigarette packets, and it is not in fact that of a castle, but the 17th Century Ducal Palace atop the sandstone cliffs that later became the purpose-built Museum & Art Gallery that can be found on the site of the original Nottingham Castle today. But don't be put off by the fact that Nottingham Castle isn't really a castle any more. The site is definitely still worth a visit and the following is a brief tour of what it has to offer.

The entrance to the castle is as it always has been, through the gatehouse. The moat and drawbridge are no longer there, but a circular brickwork courtyard gives a nice modern touch to the dominant twin towers, between which is a covered archway that gives access to the castle grounds. There is the option of either popping into the shop and ticket office in the right-hand bastion, or bypassing it completely and being stopped by one of the museum attendants before being given admittance. This harks back to days of yore when the gatehouse was where the castle guards vetted anyone approaching.

The original 17th Century wooden doors can be seen, and still retain the marks of the Reform Riots of 1831. To the right is the entrance to the shop and ticket office through a small doorway. This small shop holds many gift ideas, such as green felt Robin Hood hats, wooden bows and swords, many postcards and books, (suitably plastered with the words 'Nottingham Castle') along with many more bits and pieces, such as pencil sharpeners, bookmarks and tea towels.

The left-hand bastion holds a suitably rigged out 'Medieval Banqueting Room' with wooden tables, stone fireplace, heraldic shields, and deer antlers hanging above the fireplace. The room is officially where the Sheriff of Nottingham1 holds events, but is often used by school groups for lunch, and hidden to one side of its interior is the entrance to a small 'dungeon'. Legend has it that during the Second World War, the local Dad's Army captured a German airman and imprisoned him in this dungeon. He complained of ill treatment, and on being let out made a dash for it. The guards yelled at him to stop, but he carried on and they opened fire. One bullet apparently ricocheted off the wall of the east bastion and parted a passing woman's hair!

Once you have been granted entrance to the castle, you can proceed into the outer bailey - the modern castle grounds. Here toilets can also be found, the ladies to the left of the Gatehouse, the gents a little further up towards the remains of the Black Tower.

The castle grounds are quite beautiful, the grass green and the many native flowers and trees provide a wonderful botanical display, and there are many spots to lay out a picnic blanket. Amongst the ruins of the outer bailey are pathways to other sections of the castle, and the keen eye will spot 12th Century brickwork (and even the odd fireplace disguised as a bench). Be warned though, the ascent to the museum is quite strenuous, whichever path you take, and those of poor health or frail bodies might like to take it slowly. Before you decide to begin the climb to the top of Castle Rock, you may like to see what else the old outer bailey has to offer:

The Ducal Palace of William Cavendish, 1st Duke of Newcastle, is now the Museum & Art Gallery. This building sits over where the original castle's upper bailey was, and if you follow the outside of the building around to the outer bailey walls you are rewarded with amazing views of Nottingham and its surroundings. On clear days you are able to make out the control tower of East Midlands Airport to one side, and many of the original buildings of early Nottingham, such as the churches of St Mary's and St Nicholas, the Council House, and Notts County and Nottingham Forest Football Grounds to the other. For 20p you can use one of the few viewing telescopes to zoom in on certain focal points, there being suggested sites given on placards along the cliff-top walls. The Ducal Palace is an incredible site in itself up close, its Italian/Flemish-style architecture is as interesting to look at as the contents of the halls and rooms within, all accessible by lift:

The caves and tunnels under the castle are many, but some are open to the public, and guided tours of these are available daily at the castle shop. Those that can be seen are:

Getting There & Getting In

The castle is really easy to find. Once in Nottingham, make your way to the Market Square, just outside the Council Houses (where the Lions are). This big patch of open space is unmistakable, there are tram stops and a fountain, plus swathes of shiny grey granite paving stones. From there, look for Friar Lane. You'll pass the Walkabout pub on your left and numerous bus-stops to your right. Walk up Friar Lane until you come to Maid Marion Way. Cross over this busy street (once named the ugliest in Britain) and follow Friar Lane further up until you come to the corner of Friar Lane and Castle Road. The name of the second road is a dead giveaway to where you are, and if that's not enough you should see the Gatehouse smack bang in front of you.

Getting into the castle is a lot easier than it used to be. Admission to the castle grounds (as the museum is free) is from between 10am until 5pm from March to September (summer opening), and 10am to 4pm October to February (winter opening) every day of the week except Mondays, when it is closed to the public for maintenance (aside from Bank Holidays). A fee of £5.50 for adults / £4 for children or concessions (old-age pensioner or student) will get you into the grounds (plus admission to the nearby Brewhouse Yard Museum), unless you can prove you're a Nottingham resident and then you can get in at a discounted rate of £1 for adults / 50p for children or concessions - a bus pass, Nottingham Citycard, library card, student card, proof of employment in Nottingham (like a business card or ID card from place of work) or even driver's licence with address and postcode on should do the trick, but only during the week. You'll have to wave either your ticket or this identification under the nose of the Gatekeeper to gain admittance.

On weekends and Bank Holidays everyone has to pay to get into the grounds, regardless of where they're from, or who they are. If you're really stingy you can get into the grounds without paying before 10am (when the ticket shop opens), or wait until 4pm as that's when tickets stop being sold - but if you wait until late afternoon you'll only have half an hour to take in the museum, as the building closes its doors at 4.30pm. Disabled access is adequate and the Gatekeeper will radio ahead if there are any specific needs required for a visit.