Nottingham Castle - from Stuarts to the 21st Century Content from the guide to life, the universe and everything

Nottingham Castle: Museum & Art Gallery | From Normans to Tudors | From Stuarts to the 21st Century 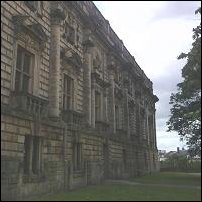 At the beginning of the 17th Century, Nottingham Castle had stood for more than 500 years. It was beginning to fade in brilliance from the peak of its grandeur in the early 16th Century. However, the fortress remained a place of great importance, as is evident from the following events in the history of the site from the 1600s into the 21st Century.

After 1605, the castle became unpopular with visiting royalty. James I preferred the residence of the Duke of Clare, Thurland Hall, when staying in the city. By 1623, James had sold the now mostly ruinous castle to the Earl of Rutland, who instead of working on returning it to its former glory simply sold off stone, timber and lead from the site. For the next 20 years the castle continued to fall further into ruin.

Then on 22 August, 1642, Charles I raised his standard outside the castle walls at Derry Mount, marking the beginning of the English Civil War. Quite why he chose to come to Nottingham to do it is a bit of a mystery, other than the fact that Richard III had rallied his own army there in the past, as Nottingham was pretty much full of Roundheads (Parliamentarians). Charles I soon scampered off to nearby Newark with his small army of Cavaliers (Royalists), and the Castle was taken over by Parliamentarian officer colonel John Hutchinson.

Hutchinson's wife, Lucy, wrote of the castle in her Memoirs of the Life of Colonel Hutchinson, and remarked that:

the buildings were very ruinous and unhabitable, neither affording roome to lodge soldiers or provisions.

Despite this, the Roundhead forces garrisoned themselves in the castle and held it, even when Cavaliers led by Sir John Byron from Newark invaded Nottingham and took the Church of St Nicholas, from the tower of which they could fire upon the Roundhead soldiers inside the castle walls. Lucy wrote of the events:

From this Church the bullets play'd so thick... they could not passe from one gate to the other.

Hutchinson's forces continued the fight, taking back the church and demolishing it, as well as repelling numerous attacks by Royalist forces. The castle remained the property of the Parliamentary forces right up until Charles I lost his head.

In May 1651, Parliament gave Hutchinson permission to demolish Nottingham Castle, the reasoning being to prevent it from being used as a fortress by others in the future, particularly the new Lord Protector of the Realm, Oliver Cromwell. Many of the Parliamentarians, including Hutchinson, saw Cromwell as a little too ambitious. So, while he was away in Scotland, the castle was set to with gunpowder, picks, shovels and just about anything that came to hand - the already crumbling building being pretty much all but pulled down.

After the end of the Civil War the castle ruins were used as refuge not only by waifs and strays but non-conformists during the time of the Restoration of Charles II in 1660. In 1663, William Cavendish, the 1st Duke of Newcastle (and Royalist commander during the Civil War), purchased the site and began work on a Ducal Palace in 1674. The 'new castle'1 was to be as magnificent as his residence at Bolsover Castle in Derbyshire. Cavendish took inspiration from the Italian Renaissance buildings he had admired during a grand tour of the Continent. He was also insistent that the palace should still be called 'Nottingham Castle', due in most part to his Royalist background.

Unfortunately, Cavendish passed away in 1676, aged 85, before the building was even a few feet higher than the foundations. His son, Henry, the 2nd Duke of Newcastle, continued the work at the bequest of William's will, which stated that the palace must be finished to the:

forme and modell thereof by me layd and designed.

The works did not go without incident, however, with one of the labourers killed during the construction. George Jackson was crushed to death while removing scaffolding from an archway. Part of the brickwork fell onto his head, and he succumbed to his injuries just two hours later. Despite this setback, the palace was completed by 1679.

The palace soon became known for the opulent parties held there (something Henry apparently had a bit of an appetite for). A great ballroom glittered day and night as candlelight, mirrors and jewels sparkled and refracted the light. Stately carriages would pass through the original 12th Century gatehouse, and party-goers would walk up the steps to the main doors, passing beneath a statue of the 1st Duke riding his favourite horse. Even Queen Anne found the surroundings to her liking during a visit to Nottingham in 1704. But by the mid-1700s the building had fallen into disuse, and in 1776 the last Great Ball was held there.

The 3rd Duke of Newcastle, Thomas Pelham-Clinton (husband of one of William's granddaughters), took possession. He wasn't keen on the property, complaining:

the Bare shell of ye House can be of little or no value, but rather an expence.

Architect and playwright John Vanbrugh convinced Pelham-Clinton to make improvements to the palace to make it 'liveable', but soon afterwards visits by the owners of the site ceased altogether. When Pelham-Clinton died in 1795 the building was transformed into a boarding school, and then eventually divided into separate apartments. However, the courtyard and grounds remained popular with the upper classes. The last resident of the apartments vacated in 1829.

In 1831 a Reform Bill to allow more people to vote was rejected by the House of Lords. The people of Nottingham took out their frustrations on the now adult 4th Duke of Newcastle, Henry Pelham-Clinton (who opposed the Bill). On 10 October the heavy gatehouse doors that led into the castle grounds were breeched by rioters - the 'Hundred of Broxtowe' - and the palace, now empty, set alight and vandalised. The burning building could be seen across Nottingham.

The duke received very adequate compensation for the arson, about £21,000, but did not spend any of the money on repairs. He simply let the empty shell stand for over 40 years to teach the Nottingham plebs a lesson.

From 1859, the newly formed 'Robin Hood Rifles' Volunteer Rifle Corps used the castle grounds for drill and parades, with stables built just outside the gatehouse. This was short-lived, though, because by February 1872 the town council was looking to establish a School of Art in Nottingham. The South Kensington Museum2 assisted from the very beginning of the project; with an influx of loans and gifts of art, there was a sudden need for suitable space to display everything. In 1873, a proposal was put forward to take over the old Ducal Palace and convert it into a Fine Art gallery. On 11 October, 1875, the castle and grounds were leased to the city for 500 years (at £250 per year) 'for the purposes of a Public Museum and Gallery of Art and Science'.

Local architect Thomas Chambers Hine (TC to his friends) was given the task of restoring and converting the once-magnificent building into something the city could again be proud of. All the interior of the palace was gutted and the original three floors converted into two, which meant the new floors cut through the original windows. The restoration took just three years and considerably less money than anticipated. The new Castle Museum & Art Gallery was opened by the Prince of Wales (later Edward VII) on 3 July, 1878. The castle became the first municipal museum and art gallery outside of London.

In July 1884, a war memorial to commemorate the non-commissioned officers and private soldiers of Her Majesty's 59 Regiment who lost their lives in the Afghan campaigns of 1878 - 1880 was erected near the site of the Black Tower. With the addition of lawns, flower beds and a bandstand in 1887, many people enjoyed a walk around the castle grounds while listening to music. In 1895, the castle had electricity put in, thanks to a publicity stunt by a local firm, and Nottingham's first telephone linked the museum to the local police station3.

In 1903, the Thoroton Society excavated some of King Richard's Tower. Then, in 1908, the gatehouse and outer bailey wall were restored. During World War I, the castle grounds and tunnels were used as air-raid shelters. On 8 September, 1921, the Albert Ball Memorial was unveiled in the castle grounds after funds were raised by the Nottingham public to remember their fallen son.

The castle again saw use by people seeking refuge from air raids during World War II. Then, in 1952, the city council bought the lease for the castle and grounds outright, for £16,000. In July of that year a bronze statue of Robin Hood and accompanying plates by local sculptor James Woodford were presented to the city by Philip Clay, and unveiled on the old site of the stables by the Duchess of Portland. In 1976, the Trent Valley Archaeological Research Committee excavated the lower part of the Black Tower and middle bailey wall. Then, in 1978, King Richard's Tower was re-excavated, along with a section of turf near the Ducal Palace gates, the apparent site of the 13th Century chapel - yielding a skeleton dating from the time of the Civil War.

The castle site has continued to grow and expand culturally speaking over the years, with many touring exhibitions. There are regular guided tours of the castle and its surroundings, with interesting tit-bits and little-known history told by the many experienced guides. Various improvements are being made continually, and the future only looks bright for Nottingham Castle, even if visitors still exclaim in bewilderment:

The Entry A37235630 gives more information about the present-day site of the castle.

1Cavendish was the Duke of Newcastle, get it?2Now the Victoria & Albert Museum.3'ello, 'ello, 'ello.