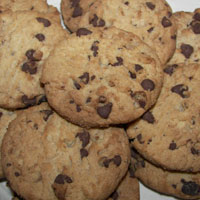 The Chocolate Chip Cookie or biscuit is a popular delicacy all over the world but most popular in North America, where they were invented by accident by Ruth Graves Wakefield.

Ruth Wakefield graduated from Framingham State Normal School Department of Household Arts in 1924. After she graduated, she worked as a dietician and food lecturer. In 1930, she and her husband Kenneth bought an old toll house halfway between Boston and New Bedford in a place called Whitman in Massachusetts. They decided to open it as a lodge and restaurant called The Toll House Inn. Ruth produced home-cooked meals in the restaurant and baked for the guests in the Lodge, she also started improving traditional Colonial recipes and gradually her desserts and baked goods gained a reputation that began to attract people from all over New England to her restaurant.

Ruth's favourite recipe was for Butter Drop Do cookies. One day she was preparing batter for the cookies when she realised she did not have any cooking chocolate. Hunting through her kitchen she found a bar of plain (known in the US as 'semi-sweet') chocolate that had been given to her by Andrew Nestle. She chopped this into small chunks and mixed it in with the cookie mix. Ruth had expected the chocolate to melt when the cookies were baking but when she took them out she found that the chunks had held their shape but had softened instead. As the cookies became a success with the customers at the Lodge the recipe was soon being printed in a Boston newspaper along with others across New England.

Meanwhile Nestle, having seen the sales of the Semi-Sweet Chocolate Bar rocket, came to an agreement with Ruth which allowed them to print her recipe for Toll House Cookies on the wrapper. In return, they were prepared to supply her with as much chocolate as she needed for the rest of her life. On the back of the success of the Semi-Sweet Chocolate Bar for cooking, Nestle began scoring their chocolate and selling it with a special chopper to make it easier to cut into small chunks. In 1939 Nestle came up with a better idea and began producing 'Toll House Real Semi-Sweet Chocolate Morsels'. The rest, as they say, is history.

Ruth continued to cook and bake until she and Kenneth sold the Toll House Lodge in 1966 and also wrote a number of cookery books. The family that bought the lodge from Ruth and Kenneth tried and failed to turn it into a nightclub. It was sold again in 1970 to a family who turned it back into a lodge and restaurant until it burned down in 1984.

This isn't Ruth's original recipe; it's the author's own. It has been tried and tested by some of the h2g2 Researchers and tasted by a fair few more. If you use plain chocolate chips instead of milk chocolate the recipe can be used by those who are dairy intolerant1.

1This claim has been tested and verified by a Researcher whose daughter is dairy intolerant; she in turn gave it the thumbs-up2self raising flour can be used instead of plain flour and baking powder if desired.