Barry Foster - The Actor Content from the guide to life, the universe and everything 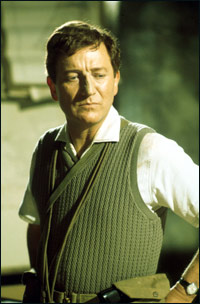 Barry Foster is best known for his portrayal of Freeling's Dutch detective Piet Van Der Valk in the 1970s TV series Van Der Valk. In addition to this, he appeared in many Film, TV and Stage productions, from an uncredited role in Powell and Pressburger's Battle of the River Plate to Hitchcock's Frenzy and much more.

Born in Beeston, Nottinghamshire UK on 21 August, 1931, Foster had worked as a plastics chemist before embarking on a career in acting. Foster trained as an actor at the Central School of Speech and Drama in London, arriving there at the age of 20, a little older than the other students. It was here he became friends with an actor called David Baron, better known as playwright Harold Pinter. Foster would go on to appear in two of Pinter's plays, The Basement and The Tea Party. Foster's professional stage debut came in 1952 as 'Lorenzo' in The Merchant of Venice, then in 1955 he made his London stage debut.

Foster's first film role came in 1956 in the war film Battle of the River Plate. Over the years, Foster played in a wide variety of Film and Television roles, including David Lean's epic Ryan's Daughter, The Battle of Britain, King and Country, The Family Way, The Wild Geese, Robbery, Sweeney! and Inspector Clouseau up to his final film Rancid Aluminium in 2000. But it was in 1972 that he was to play two memorable roles, on opposite sides of the law. First was cynical detective Van Der Valk and second was Bob Rusk, the necktie murderer in Alfred Hitchcock's Frenzy - Rusk, a seemingly charming man, intent on pinning his murders onto his best friend - but not succeeding. Van Der Valk1 would resurface twice more in his career, in 1977 and once more in the early 1990s. Shortly after the third series as VDV in 1978, Foster was to take on the role of the most famous detective, Sherlock Holmes, in a series of radio appearances for the BBC. He recorded 13 episodes of the Holmes canon, with David Buck as Watson.

Although he was most famous for his role as Van Der Valk in the programme of the same name, sometimes he was mistaken for other actors! Foster himself said of the public:

they think I'm Inspector Morse or else it's Jon Pertwee in Doctor Who or Keith Barron from Duty Free.

But he also said that he probably got more work because of this mistake, though at its height of popularity, Van Der Valk was drawing almost 15 million viewers a week, and so famous was his portrayal as Van Der Valk, that fan mail for him would be addressed to 'Mr Van Der Valk, London'! Foster's many guest appearances on TV include Inspector Morse, Bergerac, Fall of Eagles and Smiley's People.

His marriage to singer and actress Judith Shergold was a long and happy one; the couple were married for 40 years. His daughters Miranda and Joanna are both actresses, but his son Jason has not gone into acting. After Foster's death, a trust was set up, The Barry Foster Memorial Appeal to help disabled children to get involved in theatre.

Foster also had a great love of food, particularly seafood, which he claimed meant a constant battle with the bulge, and his remedy for this was to exercise often. Playing Golf was a great favourite of his, after a slipped disc meant an end to his Squash playing. According to the 1978 VAN DER VALK ANNUAL , Foster made a mean Oyster Soup, with lots of butter and White wine.

At the time of his death on 11 February, 2002, Barry Foster was appearing in a run of the play 'Art' alongside fellow actors Nigel Havers and Roger Lloyd Pack. Although he had been in excellent health, sadly he suffered a heart attack, and passed away in The Royal Surrey Hospital. His agent of 20 years, Sandy Rees called him 'a great wit, and (he) had the clearest intelligence and enthusiasm'.

1The theme to Van Der Valk ('Eye Level') made it to Number one in the charts in October 1973. Don't know the theme? visit TV Cream's themes and listen to it!