Toilet Roll - The Pocket-Sized History Content from the guide to life, the universe and everything 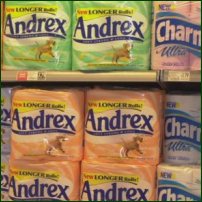 It can now be environmentally friendly, hygienic and made from recycled paper: but what on earth did we do before toilet roll arrived on the scene?

Well, in the first place there was the 'left hand and a little water' technique. This was favoured in the Middle East and is still the norm today in most Islamic countries following the teachings of the Koran. This is believed to be the reason why the left hand is considered unclean and, of course, we always greet or shake hands with the right.

Assuming you were not inclined to use your hand to clean your derriere there were many more options. The Romans favoured a sponge on a stick; the sponge was kept in a bowl of salted water and poked with a stick. This would have been particularly convenient for those with a fuller figure to reach the awkward angle required to achieve cleanliness of the nether region. A reusable sponge wasn't the ideal solution however1.

The Greeks preferred to use a stone. A little rough perhaps, but they were also known to use pieces of clay which is maybe a tad better than a stone.

Eskimos would use what the seasons allowed: moss in the milder weather and snow in the winter. This would probably be a touch chilly but probably cool enough to stun most bacteria. On a similar note, it wasn't unusual for people to defecate in a river where the act of going and cleaning was taken care of in the one movement, as it were. The rest of the world also used whatever came to hand. Leaves2, corncobs, grass, soil, sand, mussel shells and even coconut shells were all commonly used.

As ever, the innovative Chinese began to suss out other options as early as the 14th Century when they began to produce toilet paper sheets. These sheets were for the exclusive use of the Emperor and other 'royals' and came pre-cut in sheets of two feet by three feet - quite ample, it would seem, for the task - and they produced around 720,000 sheets per year.

Vikings enjoyed the luxury of wool for their sensitive behinds.

Meanwhile, in Europe the aristocracy were using linen or lace; a curious choice given the pattern would have included holes. The French were, of course, the first to consider the bidet for their personal hygiene needs in the middle ages, a sort of evolution of the 'going in a river' method.

When paper became more readily available in the 16th Century it began to be reused and the likes of letters and envelopes were utilised as bottom wipes. By the time we reach the 1800s, this mode of recycling newspapers, magazines and indeed books was at its height. The publications, when read, were the natural choice for bottom wiping. This common usage for printed material was so widespread that in the USA The Farmer's Almanac came with a pre-punched hole in the corner so that it might be hung in the littlest room more easily.

New Yorker Joseph P Gayetty was the first to see the potential in the production of bottom wipes and he produced what is credited with being the first packaged toilet paper in 1857. His paper was pre-moistened and medicated with aloe3, packaged in sheets as Gayetty's Medicated Paper4. He proudly had his name printed on each sheet.

Toilet paper as we know it today was first marketed in the USA by either the Albany Perforated Wrapping Paper Company Ltd in 1877, or the Scott Paper Company in 1879, depending on which account you prefer to believe. Either way, the companies were not keen to be associated with such a bodily function, and neither were willing to print their company name on their product. This resulted in 'personalised' consumer-specific toilet rolls, most famously that of the Waldorf Hotel. Toilet roll was so unmentionable that it was supplied in plain brown wrapping paper, and rather than ask for it specifically, customers would just ask the shopkeeper for 'two please'.

It wasn't until 1935 that Northern Tissue marketed their toilet tissue on a roll by advertising that their toilet paper was 'splinter-free'. Not that all previous paper contained splinters, but occasionally one would manage to make it through the manufacturing process, so caution was the watchword of the day5.

Advertising began to prey on the public's fear of infection, and doctors were enlisted to praise the medical value of toilet roll in protection against almost everything from mental illness to the common cold.

The British had been in on the act since 1880, but it wasn't until St Andrew's Paper Mill introduced the first two-ply toilet roll in 1942 that it really began to be appreciated in homes across the land.

Where we are Today

I've learned that life is like a roll of toilet paper. The closer it gets to the end, the faster it goes.
— US News Correspondent Andy Rooney.

Since the 1980s almost all of the world's toilet roll has been made from recycled paper, making it environmentally-friendly as well as bottom friendly. Today, there are more than 5,000 companies producing toilet paper across the globe, and it's becoming a more and more essential part of our lives, indeed many people won't leave home without it.

There are around 86 million rolls of toilet paper sold each day, and their uses extend from their original purpose. In the 1970s toilet roll was the missile of choice for football fans and was regularly seen flying from the terraces. It is also still in common use for making 'spit balls' which adorn the ceilings of many toilets in schools and youth clubs. Today toilet paper is used for make-up removal, nose blowing, dusting, wiping, cleaning glasses and stemming shaving nicks. There is also an etiquette regarding the hanging of your roll, which can now be any one of a number of colours to complement your bathroom suite.

Finally, in 1973 Johnny Carson single-handedly brought about the United States's one and only toilet roll shortage. During the 1970s shortages were commonplace, but Johnny made a joke during his monologue stating: You know what's disappearing from the supermarket shelves? Toilet paper. There's an acute shortage of toilet paper in the United States. Well, the next day the American public went wild and the shops were cleared of toilet rolls by noon. Even following his retraction a few nights later, and with the assurances of Scott Paper that their factories were working full-time, the brakes could not be applied and the great toilet roll run continued. The panic fed itself, and it was some three weeks later that the shelves were restocked to their previous level. Okay, so it's not Orson Welles' War of The Worlds, but it is funny.

1Best hope you didn't get the wrong end of the stick.2Probably goes without saying but excluding nettles, poison ivy etc.3Aloe is making a comeback at the moment, being marketed in both toilet tissue and paper handkerchiefs.4Curiously, this appears to be more like the world's first baby wipe.5Who would you ask to remove a splinter from your bottom?