The Bountiful Coconut Content from the guide to life, the universe and everything 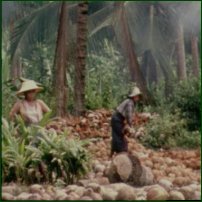 Nuts are seeds which are enclosed within a hard outer shell. The humble coconut grows on palm trees in tropical regions, the image of which creates an idea of 'paradise' in the imaginations of many people.

The bountiful coconut has all the elements of a superfood; the 'meat' and its juice are both high in protein, fats and carbohydrates, and none of the palm tree goes to waste. It is possible to utilise the whole coconut and palm tree for basic survival needs.

Small plants similar to coconut palms grew in (what is now) New Zealand as far back as 15 million years ago. The more modern coconut appears in early Sanskrit literature dating from the 4th Century BC. In ancient Indian rituals it was known as Sriphala (the 'fruit of the gods'), and the cutting down of the sacred tree was forbidden.

In various cultures the coconut palm tree provides all of life's necessities: the Malay people call it the Tree of a Thousand Uses and in the Philippines it is revered as the Tree of Life. Coconuts are an essential part of Hindu religious ceremonies such as weddings, as they symbolise a generous nature, usefulness, selfless service and prosperity.

Coconuts feature in many South Asian mythological stories and legends. In ancient India, coconut palm trees were known as Kalpavriksha, or 'the tree which grants all wishes'.

The Fruit of the Coconut Palm Tree

Coconuts are capable of floating many miles after they have fallen into the sea and can seed themselves where they have washed ashore. Sometimes it is possible to see a small deserted island with a few palm trees, as they require no cultivation. The tropic regions are perfect for the coconut palm, as they can tolerate sandy conditions, salination and the baking hot sun.

In some parts of the world, monkeys are taught to harvest coconuts. There are training schools for monkeys in southern Thailand. On many South Pacific islands you can be shown how to climb a coconut palm, just as the islanders did generations ago. The stance required is very awkward, then there's the added danger of carrying a large knife for detaching the prize. People on the ground need to beware as well, as it is possible to be killed by a falling coconut.

To open a coconut, poke the 'eyes' through with a screwdriver, drain the juice into a cup, then hit the coconut with a hammer, taking care to guard your eyes from any flying matter. Be aware that too much of the stuff can be detrimental, as one intrepid Researcher found: 'Coconut juice and meat are great laxatives'.

Young coconut water/juice, which is similar to human blood serum, has been used as a substitute for glucose in medical emergencies. During World War II, coconuts provided the glucose supply when there was no sterile glucose available, saving many lives. Coconut water can be substituted when there is a shortage of suitable blood donors or plasma. In this way, the coconut has saved countless lives in Third World countries.

Frond can also be used in weaving:

There is a sickly sweet drink called Neera (Indian name) made from palm sap. The sap can be tapped directly from the tree periodically without doing it any harm. Other parts of the palm tree are used in traditional South Asian medicine.

My brother was in the army in World War II, a Captain. One day he sent us a coconut covered in stamps. I was just a little lad, maybe nine or ten years old, and I don't know what excited me more; the coconut or the stamps.
- Derek Wicks, BBC WW2 People's War contributor.

My grandmother's favourite sweets were Toasted Coconut Teacakes. She always had a bag of them and I was only allowed one sweet per visit. She had lived through rationing, and was still very frugal, but it made them a rare treat which I relished.
- An h2g2 Researcher.

I had one on my honeymoon, that a wizened little old Balinese bloke harvested for us - he shuffled his way up the tree and cut a couple down for us. He then used the big knife to hack a hole in the top and poured out almost two litres of the juice from inside (good with rum in it - but then isn't everything?) and finally hacked it in half. The white flesh inside was soft and could be scraped from the inside using a finger or bit of shell. I was very surprised by how soft it was, only ever having had the rock-hard versions we tend to see in the UK! It was lovely, worth travelling back to Bali to have again I reckon.
- A newlywed h2g2 Researcher.

Coconut oil is used in beauty products like body lotion and lip balm. Coconut balm skin-softener is great for rough skin, especially cracked skin on heels. Coconut cream is used in shampoos and conditioners for the hair and as scalp treatments. Also available commercially are coconut-scented shower gels; coconut essential oils for massaging; and coconut-fragranced incense sticks and aroma-candles for a sweet-smelling home.

If you have poked a hole through the 'eyes' to drain the juice, you can thread some string through one and hang it upside-down (so it doesn't collect rainwater) from a bird table, fence or tree, taking care to position it well away from where cats lurk. Your feathered visitors will take ages picking it clean, providing you with hours of entertainment. You should never re-fill the empty shell with desiccated coconut as it can swell in the bird's stomach and be fatal. Re-fill your feeder with seed and nut-filled fat which has been allowed to set. Empty shells can also be used for bird-housing.

The Britannia Coconut Dancers of Bacup are a traditional dance team comparable to Morris Dancers. Locally they are known as 'The Nutters' and they write poetry in their regional dialect.

'Annie, I'm Not Your Daddy' was a top ten hit for Kid Creole & The Coconuts. When the group were invited to perform their hit on Top of the Pops in October 1982, they gave out coconuts to the bemused audience.