The Problem with Driving Directions Content from the guide to life, the universe and everything 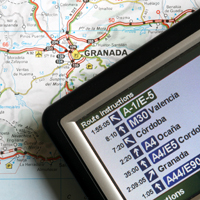 In the absence of in-car electronic route maps, driving directions are sets of instructions given to drivers in order for them to reach their desired destination. These basically come in two different forms: oral and written. Whether oral or written, they are widely used due to the fact that people often have no idea how to get to where they are going, and naturally assume that they are the only ones that do not know, and so ask someone else. Unfortunately, this other person tends not to know either.

Written driving directions can be of varying complexities. Often, they can simply state where to turn, but other times they can contain scribbled maps. However complex, written driving directions operate under the premise that people who use them will be unable to forget them because they are right in front of them. This is fine in theory, except that they are usually wrong.

Driving directions which contain instructions as to where to turn are the least wrong, usually only confusing 'Highway 351' with 'Highway 350', or 'Philadelphia' with 'Amsterdam'. Unfortunately, no one ever quite knows the distance in miles from one place to another, and thus has to rely on primitive distances ranging from 'a little way' to the eternally-stretching 'long while'.

Maps can be even bigger problems, however, because any time someone tries to draw a map, they usually leave out entire roads. If a map is drawn accurately as far as roads go, it's still hard to convey distance without an actual ruler. Attempts have been made to create some type of system for reading maps on driving directions, as can be seen in the following scale:

Oral directions during the trip are often given by a passenger. This means they are trying to read a map while going along. This causes problems due to the average person's lack of map-reading ability.

Directions given during the trip can also happen when someone's written directions fail, and they stop to ask for directions. If that person can understand the accents of the people in the area, he already has solved the most difficult obstacle. The second biggest obstacle is what the people are actually saying.

Everyone asked for directions, of course, naturally assumes he is the ultimate authority on all directions. One leaves these people with an absolute understanding, and says to oneself, 'Oh, that makes sense!' This is completely wrong, of course, and the destination still cannot be found. This is often because landmarks mentioned by the local person are impossible to identify, or no longer exist. Another problem is that sometimes the person you ask does not drive, so gives you directions that involve going the wrong way down a one-way street, or even down a footpath! Thus it is usually necessary to ask another person for directions, who then gives radically different directions. If a person is lucky, he may be able to splice together the two different directions to form a safe passage route, but usually this does not happen.

In both research and real life, people have observed that women and men give directions differently. Women tend to depend on landmarks and other visual cues - 'Turn left at the gas station and then hang a right at the little red house.' On the other hand, directions given by men are more likely to consist of distances and actual street names - 'Turn north onto St James Avenue for about a half kilometre, and then turn west onto Harris Road.'

A major problem with oral directions is that human memory sometimes lets you down. The average person can remember about seven related things1, this means they will remember the first few directions, perhaps four road names and three distances, but after that, they will be lost, again.

Often distances are expressed in terms of how long it takes. For example: 'It's about 10 minutes down the road.' The problem with this is that different people drive at different speeds, especially if you are not sure where you are going, and the person you are asking drives along those roads everyday.

Many people use gestures as a more accurate way of showing distance, especially in cultures which use a lot of hand gestures. One very good example of this can be seen in Germany, where the inclination of one's arm is used as an indicator of how far away something is. This is far more accurate than saying 'a little way' or 'a long while', and tends to go on the following scale:

While gestures can be somewhat of a solution to the problem of non-standard scribbled maps and spoken words, they are still not very accurate, and can simply look odd to outsiders.

Directions at a Distance

A new kind of directions has arrived now that mobile phones are so widely used. While driving along, you can now phone a person at the destination and ask for directions2. The problem with this is that the person on the end of the phone invariably starts by saying: 'Where are you?'. The answer is invariably: 'I don't know'. So the directions normally start with: 'Drive around until you see a big red warehouse...'. Once you have found the warehouse, however, this can be a successful method of getting somewhere, because you can point out to the person on the phone, for example, that there are no left turns of this road, because you are driving along the coast, something you cannot do before the journey starts, or while stopped at the side of the road.

One of the worst type of directions is the negative direction, the most common of which is in the style of: 'If you get to the church, you have gone too far.' These give you no hints as to how to get back after going too far, nor do they help stop you going too far. This can leave you in the middle of nowhere, with no idea how to get back.

Obviously, getting good driving directions is a problem. Many people rely on highway maps, which are useful if another person is in the car but hazardous otherwise. Even when someone is in the car, it is often very hard to plot your own course, which is why many people today rely on online mapping websites. Such Internet sites have the ease of use claimed by human sources, but use more standard measurements and have a tendency to be accurate. Despite the accuracy of the highway and road names, Internet mapping websites do not always know the fastest way of getting somewhere, managing to turn what should be 'a little way' into '6 hours'.

Sadly, a solution to the problem of getting accurate driving directions may be far off. Then again, it may only be a little way away... depending on the directions you get.

1This is why telephone numbers are usually about six or seven numbers.2It is dangerous (and illegal in many places) to drive while on the phone, so it is advisable to pull over before you use the phone.