New Ferry Butterfly Park, Wirral, UK Content from the guide to life, the universe and everything 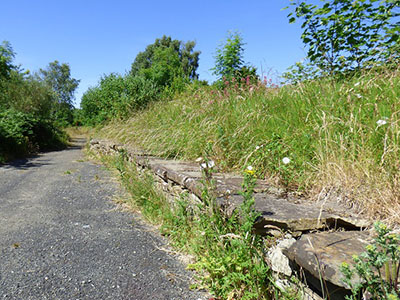 New Ferry Butterfly Park is situated just outside Port Sunlight on the Wirral. As it is only open on Sunday afternoons during the warmer months of the year, it would be easy to overlook this hidden gem, but it is well worth visiting if you have an interest in butterflies and wildflowers.

The Park is managed by the Cheshire Wildlife Trust, Wirral Wildlife and volunteers. It is situated on a strip of land that was once owned by British Rail, but which had become derelict in the 1960s when the Bebington and New Ferry Railway Station decreased in size. Cheshire Wildlife Trust leased the land in 1993 and the Park has been open to the public since 2010.

The industrial activities that took place in the area in the past have shaped the natural landscape today.

Near the entrance to the Park used to be where the coal for the railway engines was stored. The coal caused the soil underneath to become acidic, so yarrow and sorrel flourish here. Look out for Red Admiral butterflies on the nettles.

Further into the Park is where a water purifying plant was. It provided pure water that would not clog up steam engines. The resulting lime waste caused the soil around it to become alkaline, which is ideal for orchids - the area is covered in the beautiful blooms of Marsh Orchid in early summer and you may even be able to see a Bee Orchid too.

The area where railway sidings used to be has been taken over by nature - the ballast gravel is the perfect habitat for tiny wildflowers such as bird's foot trefoil to grow. The red and black day-flying Burnet Moth can often be seen in this area, as can the Common Blue butterfly.

A railway station platform has been rebuilt to create a habitat for insects, and flowers such as sedum and valerian. Look out for the pale yellow-green Brimstone butterflies that have made their home here. You may also see Small Copper butterflies, Gatekeepers, and Small White butterflies.

In addition to the areas where nature has taken over from industry, some artificial landscaping and sculpture has taken place. Look out for items such as a sundial made from cogs and the playable 'Elastatone' musical instrument. A garden area has been created so visitors can sit in the shade of a tree while watching butterflies such as the Small Tortoiseshell and Meadow Brown butterflies enjoying the flowers in the sunny border.

The pond was excavated in 1996. It is now home to smooth newts as well as other pond life including snails, dragonfly nymphs, water boatmen and Daphnia. On sunny days, dragonflies and damselflies may be zooming round. 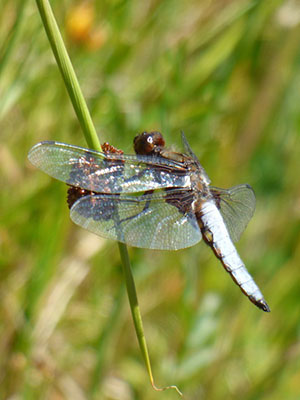 The Park is very easy to get to by train, as it is adjacent to Bebington Station on the Wirral Line. There are car parking spaces alongside the Park, including spaces for disabled people who have a Blue Badge. Entrance is free, although donations are welcomed. The paths are quite steep in a couple of places, and can be narrow where the vegetation (including butterfly-attracting nettles) has grown bushy, but a good proportion of the site is easy to explore. There are a number of benches situated in pleasing places and volunteers are on hand to assist in case of any problems or questions.

History leaflets, maps of the site and wildlife worksheets for children are available at the entrance. Activites such as guided tours and pond-dipping take place regularly throughout each summer. Keep up to date with the latest news via the Wirral Wildlife Blog.