End of the Line for Steam on British Railways: The Dieselisation Programme Content from the guide to life, the universe and everything 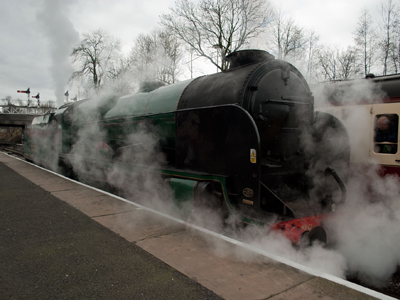 In the years after World War II, two massive changes were made to the railway system of the United Kingdom. In 1947 the entire network was nationalised, removing the Big Four private companies1 that between them owned and controlled the lion's share of the network. The powerhouse of their systems had been the steam locomotive, an ageing technology. Almost immediately, the newly-nationalised British Railways was faced with competition from the road network. Road haulage was becoming increasingly popular and the private car more affordable for the average family. It was increasingly obvious that steam traction was outdated and something new was needed. In 1955, a programme of upgrades to the railway system was initiated – the Modernisation Plan.

At the time it was nationalised, the government's new public utility was in a sorry state, having suffered years of neglect. There had been no investment, and ongoing maintenance of the infrastructure and rolling stock was minimal. Nevertheless, steam locomotives had played a vital part in helping win the war, moving troops, supplies and munitions on top of their regular passengers and freight. Despite the extra traffic and longer trains, the railways did not receive as much money, as the government took a large part of the earnings. Steel and other materials were prioritised for war use, and the railway companies lost many men to war service; maintenance was not a priority. The RAF had defended the skies of the Kingdom, and hence the country's railway network, while inflicting crippling damage on the continental rail system. In Europe, the destruction caused to the railways necessitated an almost complete rebuild, whereas the relatively unscathed UK network continued the wartime policy of 'make do and mend'.

A Railway for the Future

In planning for a railway for the future, a key decision would be the choice of traction power. Would this be the end of the line for steam? There were three alternatives available – diesel power, electric power or build more steam locomotives – each having their own pros and cons.

Managers and experts looked over all the options and came to a conclusion. The best way forward was by mass electrification. However, in post-war Britain, the railways were losing favour fast. It was forgotten that the railways had played a vital part in winning the war, and now they faced massive competition from the roads. The road haulage lobby had more swing with the government and more people than ever owned private vehicles. The railways could not afford to introduce electric traction across the system in one big sweep. It was estimated that it would take until the 1980s to electrify all the main lines.

As a temporary measure, they decided to build a new fleet of British Rail 'Standards' steam locomotives to supplement the existing fleet while lines were being electrified. These locomotives were to be cheap to build, and for steam locomotives, easy to maintain and to run. Construction of these started in 1951 and ended in 1960, when a total of 999 had been built.

The 1955 Modernisation Plan4 put forward a new vision for the rail network. It decided in favour of electric and diesel power over steam locomotion, and encouraged the use of multiple units instead of small locomotive-hauled passenger trains. Being the 1950s, atomic power was considered but decided against it for onboard train power. It would be another 16 years before British Rail patented an atomic-powered vehicle, but this would be a space ship.

It was decided that on top of the existing suburban electric systems, the lines out of Liverpool Street to Essex and East Anglia would be electrified, as would the London, Tilbury and Southend Line from Fenchurch Street. The Southern region would have its electric network extended to cover most of the main lines to the Kent Coast. The Glasgow suburban network would get electric power. Both the West Coast and East Coast main lines would also be upgraded.

Diesel multiple units would be introduced to replace locomotive-hauled trains on city-to-city expresses, branch lines and cross-country services. Diesels would replace steam locomotives for all shunting and for mainline services on non-electrified routes.

Steam locomotives were to be phased out, however it would be another five years before the engine workshops stopped producing new steam locomotives. Despite the report recognising their 40-year working life, steam power was phased out after 14 years.

Two other major investments envisioned by the Modernisation Plan were refurbishing a number of stations and improving the efficiency of freight transport. Freight wagons would be required to have fitted brakes to allow safer and faster running. Giant marshalling yards would be built across the nation to allow freight trains to be broken apart and rearranged quickly.

In order to fund this project, the government loaned the railways a vast amount of money.

Bring on the Diesels

The government saw the introduction of a new fleet of diesel locomotives as a chance to show off the engineering prowess of British manufacturers. It asked for a range of locomotives grouped into 'types' of similar sizes and powers. Within these types different manufacturers produced examples using engines and components from leading British companies.

On top of various classes of shunters, the four locomotive types were:

It was normal convention to describe each class of locomotive by their manufacturer and what power group they belonged to. For example, one class was known as the English Electric Type 3. Locomotive numbers were assigned in batches to each class. They all began with the letter D but there was no convention on the numbers that followed. Unless you knew where each class's numbers stopped, it was hard to relate a number to a locomotive.

In the 1960s British Railways adopted TOPS - Total Operations Processing System - a computerised system to handle all their traffic. Each object, be it a locomotive or a multiple unit was given a number. The first two or three numbers denoted the class, the other three denoted their number within the class.

Power to the Wheels

Diesel-Mechanical locomotives are generally low powered as the gearbox needs to be large, complex and very heavy duty to cope with the torque of a locomotive, and they have to be able to change gear while under load. Some multiple units were Diesel-Mechanicals. British Rail experimented with a high-powered express locomotive, but this didn't prove very successful.

Diesel-Hydraulic locomotives were very successful in continental Europe. They use a torque converter similar to an automatic gearbox in a car. In theory these are more efficient than other major forms of transmission, and lighter than Diesel-Electrics (an express Hydraulic was around 60 tons lighter than a similar Diesel-Electric). Because the axles are linked by driveshafts, it is impossible for individual wheels to slip on their own. This means they can put down a lot of pulling power. The Western Region of British Rail saw how well the German V2000 locomotives were performing in their native country, so decided to try them out there. However, they encountered a major reliability issue when worked on the British Network. In Germany, the locomotives were always worked well within their capabilities, but the management of the British network did not see the point of buying a 2,000 horsepower locomotive and not using all of its power. Many of the British Hydraulics suffered through being thrashed, and steam had to be brought in to replace them. The small, non-standard classes of Hydraulic locomotives were soon replaced by new Diesel-Electrics, although the technology is still in use in many multiple-units.

Diesel-Electric locomotives were essentially hybrids. Electric traction motors drove the wheels, getting their power from generators powered by a diesel engine. There was no mechanical link between the motor and the wheels, meaning that they were a simpler design. It also meant that they didn't suffer from transmissions breaking when they were unable to cope with the large forces generated. Diesel-Electrics was the technology of choice for most of the new locomotive fleet as it was able to cope with high power applications.

Electro-Diesel locomotives were a type of Electric locomotive, normally ones powered from the third rail. They also had a small diesel engine to help power them between gaps in the third rail and also in depots, where it was unsafe to have live third rail power.

Logically, the key to extracting the best of this new fleet of locomotives would be finding the best designs and then building large batches of the best design for each power class. This standardisation could allow the benefits of economy of scale such as lower build costs and cheaper spares, as well as drivers and other personnel being more familiar with the locomotives.

What would be stupid would be awarding contacts to many different manufacturers to make similar locomotives.

What would be monumentally stupid would be to award these contracts before the prototypes had been fully tested, just in case some of these brand new designs didn't actually work.

This last route was the one chosen by the rail industry under pressure from the government. Some classes of locomotive were soon found to be hopelessly unreliable, yet British Railways had to keep buying more. Many of the new diesels were out of use even before the end of steam.

The Failing of Modernisation and Dawn of Beeching

The government had lent the railways a huge amount of money, then told it how to spend it. Unsurprisingly, the railway was soon in even more trouble as it was struggling to make any profits. Action needed to be taken. A new chairman of the railways was appointed. He wasn't a railway man, he was an executive from ICI, and he commanded a huge salary. He was Doctor Beeching.

It is probably worth mentioning that the Transport Minister, Ernest Marples, who appointed Beeching had made his fortune out of road construction, and would not have objected to more roads being built. Of course, it would be out of the question to say that he would have profited directly from new roads, as he sold his shares in his construction company. To his wife. Marples ended up fleeing the country, wanted for tax fraud. In addition he was also wanted by both his former employees and tenants of the slums he owned.

Since the British rail network had been built by lots of competing companies, there was a massive amount of redundancy. Many towns and cities were served by multiple lines and stations. While Beeching is infamous for producing the report that suggested closing the underused lines, route closure happened before and after Beeching. Another consequence of Beeching and his reforms was that much of the minor freight traffic was taken onto the roads, meaning that the vast recently-built marshalling yards and many of the fleet of new locomotives, especially the smaller ones, were no longer needed.

1Great Western (GWR), London Midland and Scottish (LMS), London and North Eastern (LNER) and Southern Railways (SR).2Hammer blow is the effect of the force from the pistons transmitted through the wheels. In steam engines, this can be equivalent of a few tons per wheel.3Overhead cabling would require many bridges to be altered.4 It was actually called The Modernisation and Re-Equipment of British Railways and was published in December 1954.5Having nearly run out of numbers in 2009 the latest and most powerful diesel locomotive was given Class 70, once used by an electric locomotive.