An Introduction to Water as Steam Content from the guide to life, the universe and everything 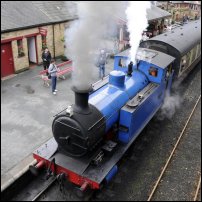 Matter as we generally know it has several basic states of being. The most general are solid, liquid, and gas. This guide to steam covers the classic definition of 'water as steam', which is a transitional state of water between a hot gaseous state and liquid. Certainly there are other elements, compounds, and solutions that can go through the same stages, but they don't make really good tea.

Steam, in this sense, is a visible water vapour. Although the boiling point of water can occur at various temperatures, depending on the air pressure under which it is heated, the effect is that it no longer sits patiently in your container. It is as close to free gas as water can get and still be visible.

Water can be heated until it reaches so gaseous a state that it becomes invisible to the naked eye, a truly gaseous form. It is not until it begins to cool that it becomes visible steam. If you watch a tea kettle boiling, you may notice how the space immediately past the spout appears to be empty air, and shortly beyond that appears steam. That is the difference between water in its gaseous state and what we generally refer to as steam.

These 'types' are a set of subjectively measured temperature ranges that only apply in earth-normal air pressures as measured by the human nervous system in relation to external body temperatures.

Cool - More accurately referred to as mist or hot water vapour. Used as a refreshing way to humidify a dry room. Water does not actually have to be hot to form this type of vapour, but then it would not be so much steam as aerosol droplets.

Warm - Most often occurs when hotter steam begins to lose its heat and nears the temperature needed for condensation. Used to moisten wrinkled clothing to get the material to relax and smooth out without pressing.

Hot - Generally, just above the boiling point of the liquid. Great for removing wallpaper, clearing the pores, hardcooking eggs, and for making tea.

Superheated - Steam created under great pressure, well above the normal boiling point. Often used in the production of Electrical or Mechanical energy through the use of turbines.

How to Make Steam

Steam is most often created from water, although you can add things to the water to change the characteristics of the steam for different uses. Commonly added substances include camphor (to clear breathing passages), herbs (to imbue rice or vegetables with additional flavour while cooking), puddings (to cook them).

How to Recognise Steam

Steam has no recognisable features, other than appearing to be a cloud-like mist generally heading in a direction away from its source, although the heat can have a tendency to distort light and make things look 'wavy'.

You can recognise steam by touch, when the skin gets very hot, probably moist, and things look wavy.

Superheated steam can actually remove the skin from bone, largely through blistering.

How to Avoid Steam

Avoid areas where fire and water can be found near each other; this includes kitchens, saunas, forest fires, etc.

How Steam has been Used

The most obvious use of steam is to provide heat, whether used for cooking (very healthy, as a rule), or to heat buildings (potentially hazardous, all those boilers and things, but effective).

Steam has been used as a power source for nearly 2,000 years, although the earliest examples of steam power did not do much. The first example was developed by Heron of Alexandria, who invented a spinning ball powered by steam. He called his toy the Aeolipile (wind ball, in Greek), some 1,600 years before English military engineer Thomas Savery patented the first crude steam engine in 1698. Heron was never to fully realise the importance of his much neglected toy.

Since then, steam has been used to power trains, generators, automobiles, elevators, and other devices, assuring recognition for its importance in the history of mechanical engineering and power.

Other Meanings Related to 'Steam'