Names and Origins of the Elements Content from the guide to life, the universe and everything 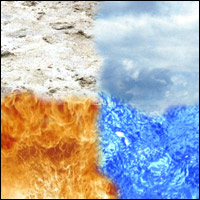 We will see that both the process of naming and defining elements changed in the last few centuries. The result of this is that the elements are named in a very inconsistent way. By looking at the origin of the elements' names we will find some parallels between an element's name, its history, its identification and the period in time in which it was identified. In some cases, an attempt to make the nomenclature more logical becomes apparent. In most cases however, the names do not follow any logic. Instead, one will find a well-assorted pool of inspiration for the names of the elements, going from mythological concepts to geographic locations, from chemical properties to the names of famous scientists.

Today, the International Union for Pure and Applied Chemistry (IUPAC)2 is, among other things, responsible for the nomenclature of the elements (there is also this .pdf note from IUPAC with more details about nomenclature). The IUPAC, obviously, did not start in the nomenclature business from scratch. It 'inherited' the circulating semi-official list from the International Committee on Atomic Weights (ICAW) when it became part of IUPAC in the 1920s. The IUPAC nomenclature became official in 1949, when the Commission on Nomenclature of Inorganic Chemistry (CNIC) was formed. The decisions of the CNIC have not always been free from controversy. And they do have the last word:

The CNIC does not deny the right of a discoverer to propose a name for a new chemical element. However [...] The names should be based on practicality and prevailing usage and finally the choice of the name [by CNIC] carries no implication at all about the priority of discovery.

Since 1994, it's been forbidden to name an element after a living person - einsteinium and fermium, for example, contravened this rule in 1951 and 1953, respectively. The naming of the so-called trans-fermium elements has not always been free of controversy3.

Historic Origins of the Elements' Names

The elements were not identified within a few decades. The process was started by the ancient civilisations - Persians, Egyptians, Romans, Greeks and pre-Columbian Indians, who themselves had different names for the same elements and had different ideas of what constituted an element. For example, water and fire were considered as elements. In the 17th Century, the most convincing definition of an element was that it should be homogenous in its properties and not be divisible into even more fundamental elements. This definition was the one used until quite recently - say, until the end of the 19th Century. The modern definition, used by IUPAC, is based on the atomic model, in which protons4 account for the positive charge of the atomic nucleus. An element is in this definition 'matter, all of whose atoms are alike in having the same positive charge on the nucleus.' Or, having the same number of protons in the nucleus.

Most elements were identified between 1700 and 1900. During this time it was not possible to measure the positive charge of a nucleus, which is given by the number of protons in the nucleus. Also, people had no idea of how many elements could possibly exist. Obviously, many materials were identified erroneously as being elements - examples are junonium, demonium, nipponium, didymium, mosandium, davyum, etc. Many of the elements found in that period, however, were indeed elements according to the modern definition and the names of these elements were taken on. Many of the elements known by the ancient civilisations, such as iron or gold, also passed the proton-count test, and the names of these elements were also inherited.

So, in summary, the names of the elements are a mixture of ancient names, alchemistic names and names for elements discovered between 1750 and 1900 that were confirmed to be elements later on. Additionally, we today also have the names of new synthetic elements. The list of elements now known is complete from elements with 1 proton to elements with 115 protons. Elements with more than 115 protons are being synthesised, but their identification is increasingly difficult as they only exist only for fractions of a second.

The Elements: Names and Origins

The names in this Entry are arranged in alphabetical order according to the English spelling. The list in this Entry covers the elements from 1 (hydrogen) to 103 (lawrencium). The elements from 104 onwards will be omitted because, first, the few remaining (synthetic) elements are still in the process of being named, and second, because these elements' etymology is rather obvious5. The symbols of the elements 6, which might help in finding the element in the periodic table, sometimes deviate from the element name (eg, mercury and its symbol Hg). When this is the case, the symbol's origin will also be explained.

1Many texts speak of an element being 'discovered'. The author of this Entry thinks this word is ill-chosen, and will use 'identify' instead. Elements are not discovered, most of them have been right there all the time. Elements can just be recognised as such, or 'identified'.2Often pronounced I-you-pack.3Also, for this reason, the elements above 103 are omitted in this Entry.4The term proton comes from protos which is Greek for first, as it is debatably the most important particle in a nucleus.5eg, Rutherfordium, 104Rf, named after Ernest Rutherford.6Symbols are preceded by a small subscript number, the atomic number. The atomic number is the number of protons in the nucleus of a certain element's atom.