Hello, and welcome to my personal space. Here, meet my towel.

I'm beginning to feel okay with the amount of my content here, but it has been gradually building. The future? Well, nobody can truly predict that.

I still miss the concept of the idea, of considering the inkling of the thought, that there may yet be one more complete Hitchhikers or Dirk Gently story about to be born. The rumours did prove true. There was someone selected to take on the mantle. Whether or not he succeeded is a matter of personal taste; but I've been left unsatisfied, and the book has remained unfinished. I'll eventually get around to finishing it, but I found those written by DNA impossible to put down without significant threat to my health and welfare.

But, if nothing else ever comes from the life and life's work of DNA, it is enough for me to know that the answer to Life, the Universe, and Everything is finally and well sorted out; and, of course, that his legacy has left us with this very splendid and worthwhile earthbound edition of the Guide.

No one was more surprised than I when the answer turned out to be the simple, yet elegant, 42 (Binary 101010). It took me months of mental hypergymnastics to sort out just what the question actually was; largely because my brain is only the size of a small moon and not, like Marvin's, that of an entire planet.

Don't ever expect to hear it, though; or expect a reasoned debate on the subject. Despite my effort to help along the DNA and philosophy fans, by creating an entry the extracts the conditions for gauging the fitness of any proposed Ultimate Question, as set forth by DNA in his fantastic universe, it looks doubtful that it will ever hit the EG, or any other portion of the guide where someone could point to it and say, 'Adams said that it has to...' or 'The lore points out that it can't...' or 'The answer forty-two doesn't fit with that question'. 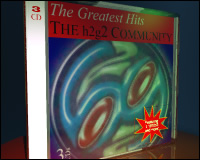 My solo contributions to the Edited Guide:

My Updates to previous entries:

My solo contributions to the Under Guide:

Other General Weirdness of the Day:

And, for those who have not yet read them, or have been directed to them: (these, I had no hand in)
A53209 The Writing Guidelines