Time: A Bi-directional Dimension Content from the guide to life, the universe and everything 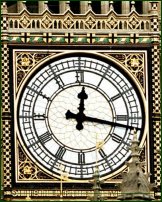 The concept of dimensionality is almost second nature to humans. We learn, very early, how to go forward, left, right, and even back up. As soon as we learn that we can go up (stand), we realise that we can also go down (fall). There are so many ways to move other than at right angles though, that we might have missed the whole concept if it hadn't been for gravity. It was gravity that gave man a firm grasp of the concept that dimensions are two-way streets.

As it stands, most of us understand a three-dimensional universe - length, breadth, and height. We may even believe that we have a handle on time as a fourth dimension (remembering always that the numbering system is arbitrary).

Theoretical physicists have greatly expounded on these few dimensions through mathematics, showing that additional dimensions are necessary to account for the forces that we perceive as electromagnetism, the weak nuclear force, and the strong nuclear force.

Much of current theory has been developed by building on the basic concepts of symmetry and conservation. Symmetry can be described as the belief that the mathematics of nature is, at heart, simple and beautiful. Conservation merely means that the universe is a 'closed system', where nothing is ever created or destroyed, enters or leaves.

The Gravity of Time

A basic problem most people have with dimensionality, and of time as a dimension, is the idea that time is a one-way street; that there appears to be a time-arrow that impels us forward only. There is an explanation (a simple explanation) that might help more people understand what are - and are not - dimensions, what time is and how it might work, and why we cannot travel backward through time.

The theory was developed by Douglas J Roach, who found himself struggling to describe multi-dimensionality, forces, etc - until he realised that it was useful to break it all down to a simpler, non-mathematical, constructs. These build quite naturally upon each other.

This concept is a single mathematical point, described in our space-time universe by four numbers. Its position must be mapped from a given reference point, with measurements for each of the three dimensions, and one for its position in time. It has no volume in our universe, and - with the entire set of dimensional coordinates (however many one cares to postulate) - would still have no volume.

This concept is embodied in the 'line', which is defined as a series of mathematical points that are all connected in succession. The line need not be straight, but can twist, turn, bend, tie itself in knots, and so on. But, topographically, it will remain a line. The only difference would be realised if the two ends are connected, in which case it would become a loop - however bent or twisted - and be described as a finite dimension: a finite, one-dimensional construct, wrapped around one or two more. A photon travelling along this dimension would appear to be travelling in a straight line when viewed from within those confines, but to 'outsiders' would follow the path of the line.

Geometry describes this concept as a 'plane', a series of mathematical points that form a surface that stretches outward at right angles from every point of any line. Though, from within it, the two dimension universe would seem to be flat and straight in all directions to its inhabitants, it could actually be stretched, crumpled, or bowl-shaped when viewed from the vantage point of our three dimension or higher space. Light, following its natural two-dimension path, would appear to be travelling in a straight line, no matter how much curving, twisting, or bending was required through other dimension(s) to accomplish this. Following the concept of the loop, it could even be formed - however bent and twisted - into the topological equivalent of a three dimension sphere; two dimensions, at right angles to each other internally, wrapped around a third dimension that they would be unable to perceive.

Now, we would seem to be on familiar ground. We can look forward, backward, sideways, up, or down. This is still a series of mathematical points that describe it one point at a time. Yet, it too, must exist in additional dimensions, if the theorists have even the smallest piece of their picture of the universe correct. This three-dimensional universe could still be a 'closed system universe' if it were - as in previous examples - wrapped around additional dimensions. All known physics would still operate as we know them, as perceived by us; but the other dimensions would still exist.

If one considers these additional dimensions as 'supra dimensions' in relation to our dimensional limits, then mass that exists in these supra dimensions could explain concepts like 'dark matter' and 'what exists beyond a black hole's event horizon'.

Yet, physicists - in recognising time as another dimension - insist that we are travelling along this additional path. Yet few have convincingly explained why there should be such directionality to this dimension, while the others are so available for bi-directional movement. This then becomes the point under discussion.

It May Be as Simple as This:

Before man realised that Earth was not the entirety of 'creation', gravity was seen as always pulling down - as uni-directional. What goes up, must come down. Some philosophers felt that things were trying to 'return home' when they fell toward the Earth. There was no thought of gravity as a 'force'.

Time, the force, may simply be another version of gravity that draws us along in one direction. We 'could' reverse direction, except that the pull is too strong, and the universe is being pulled along it as a whole. To reverse our travel through it, we would either have to escape our natural dimensionality, or take the whole of the universe backward simultaneously.

Leaving the limitations of three dimensions, we may be able to 'go back' along the time axis, but our universe would not be there to meet us. It would not exist along the axis except at the point we call 'now'.

This is all analogous to a rocket leaving the Earth. It pulls away from the gravitational pull, but does not take the Earth with it; and, it can come back. The Moon, with enough force, could have its direction reversed. So too could the universe go back in time, but the whole entity must move simultaneously, as the moon would have to do.

Look back at the discussion of the 'Two Dimension', and how - wrapped around a third - it would form a sphere; much like a desk globe representation of the world, two-dimensional surface and hollow inside. A two-dimensional being would live on its surface, never realising that its 'universe' was wrapped around an 'extra' dimension. Now, imagine that globe being caught in three-dimensional gravity. It would be drawn, inexorably, toward the source for as long as it could travel. They would necessarily perceive this travel as a uni-directional dimension, never 'seeing' that the other direction is a theoretical possibility.

Like the moon, falling in free-fall around the planet, our entire two dimension universe would be forced to 'free-fall' through a path for its entire existence, never knowing when, or if, it reached the same supra-dimensional point.

Does that sound like time to you? Under this theory, time is an inexorable path that the entire universe follows. There is a 'backwards', but we will have no capability of going that direction as long as we are confined to the dimensions we know ourselves to exist within.

Theodor Kaluza, a Polish mathematician, suggested that space-time was actually five-dimensional back in 1939. Oskar Klein, a Swedish physicist, developed this into the now famous Kaluza-Klein theory. The theory includes the hypothesis that gravity would pull in this additional direction as well; but that this additional pull would be construed as another force. What is most surprising about the theory is that this additional force would have precisely the same characteristics as the force we call electromagnetism.

Remembering that physicists have found - given the proper number of dimensions - that gravity can come out being perceived as electromagnetism, and that physics has unified electromagnetism with the strong and weak forces - imagine that this supra-gravity pulling us through 'Time' could, in our universe, come out being perceived as all of our four forces, and explain the source of the 'missing' dark matter as well.

With the prevailing theories suggesting that the number of dimensions hovers around eleven, there is a multitude of phenomena that could be explained once time is perceived as the same two-way proposition that exists in addition to the other three of which we are regularly aware.