A Guide to Metal Detecting Content from the guide to life, the universe and everything 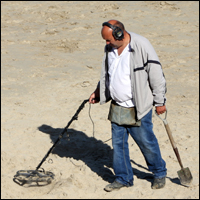 Metal detecting can be a heavy subject, full of science and study, or chance and fun. Some guides would have it that you need expensive equipment, a cartography degree, and a resistance to heat stroke. This is largely true, but you can start smaller.

The earliest metal detecting was accomplished by one of four methods; the 'finding bits of it on the ground method' (often performed in, and by, bare feet), the 'dig till you drop method' (laboriously digging about in hopes of getting lucky), the 'all roads lead back to you method' (in which running water was swirled about in hopes of finding small nuggets that might indicate a much larger supply upstream), and 'dowsing'.

Dowsing takes a bit of explaining for the uninitiated, and everyone who believes in it has a very solid set of opinions on what does and does not work. The technique, at its most basic, is to grasp two 'dowsing rods' (twigs, branches, wire coat hangers, old radio antennae, etc.) and allow the 'vibrations' to lead you to your objective; metals, treasures, water, oil, etc.

Many feel that the rods just help focus one's natural tendency to head toward that which you seek, and that the rods themselves are little more than decorative props. Others believe that only through the most stringent processes can a set of rods be assembled, anointed, blessed, and mojo-ed to make them useful to the 'dowser'.

Thank goodness for science. Now we have even heavier and more cumbersome dowsing equipment called metal detectors - a device lauded by the band 'They Might Be Giants'1, but at least you only need carry one ... metal detector that is, and perhaps heavy spare batteries.

Simply finding metal bits is rarely the primary aim in modern times. Most people can detect bits of metal as easily as sticking their hands in their own pockets, so it's not so much of a trick any longer getting your hands on bits of metal.

The thing, the trick you see, is to find metal that is more interesting or valuable than the bits in your pocket, that is also worth something to somebody. This can include non-pocketed coins, non-wristed wristwatches, jewellery, pens, buried coffee tins full of money, and other valuables. You can even search appropriate sites for old weapons, armour, farm implements and the like; but beware, you can also find barrels of toxic waste, coffee tins of dead pets, and barrels of dead people.

All this can be yours for just giving up weekends and vacations to trot about with your heavy, humming, new best friend.

All of the current device types function through the use of electromagnetic interference, and most are shaped with a helical loop of some sort at ground level and a counter-balanced neck and handle unit, with a box of electronics for readout or attaching headphones. There are differences in the way they detect metal, what metals they detect best, and the way they communicate with the user.

The rule of thumb is that more expensive metal detectors tend to be more powerful and more versatile. They can detect metal of different sorts, and at a greater depth. In fact, some will even indicate how deep the 'find' is. There are even detectors, too heavy to carry, that look much like flattened lawn care equipment and are wheeled along the ground.

The communication is best handled through headphones. These alert you when a contact or hit has occurred.

Generally, from most powerful (and expensive) down, they are:

Pulse Induction (PI) metal detectors send pulses of electromagnetic fields into the ground. The interference, resulting from encountering a metal object, produces a change in the field emitted. This is detected by the device which alerts the user through tones.

Very Low Frequency (VLF) metal detectors produce an electromagnetic field which is directed into the ground (sound familiar?). When this field makes contact with an object, the object produces its own field which is detected by the receiver. By tuning to specific frequencies, it can differentiate between different metals.

Beat Frequency Oscillation (BFO) metal detectors produce an electromagnetic field which is directed into the ground (you get the idea). This field is composed of radio waves. The object interferes with the radio waves and changes the resulting pitch.

One website breaks their offerings down into these categories:

As the list would indicate, some are more adapted to specific uses such as use at the sea shore; so be careful what you ask for, and treat it well.

Places To Go To Metal Detect

It is best not to allow new hobbies to become the reason for your incarceration, so try to stick to places that are legal. Literally, a fine place to start is one's own backyard. Another thing that societies frown upon is disturbing and/or robbing national monuments, treasures, or protected sites. Look for signage warning against trespassing, vandalism, theft, or touching as hints.

Other popular places are public areas where digging might naturally be expected. The beach is a prime example. All sorts of interesting things may be found while metal detecting on the beach. Just be sure that you don't take a buried wristwatch if it is still attached to the owner, alive or dead.

Any campground or park that allows for campfires expects a little digging to go on, just be sure to replace your divots so that animals and fellow humans don't break an ankle because of them.

Certainly deserts are considered indestructible enough that most areas, not restricted for military use or private enterprises, can be dug up all over the place. Just remember that the more remote it is, the less likely it is that something you would want to find was dropped precisely where you'll be searching. The right desert area is a prime ground for finding former battle remnants. The right desert might also have once been the bottom of an ocean, in which case you could get lucky and find a treasure chest! But probably not. Most oceans that have become desert regions did so long before pirates existed.

Be forewarned that desserts are not so likely candidates for hobbyists. They rarely contain any detectable metal, and are often found on metal carts or trays which will give false readings. Best leave them to the professionals.

Private property can also be fertile ground if one has first obtained the permission of the owner. It might be a good idea to agree in advance, though, what areas can be searched, how much ground can be excavated to retrieve any discovered objects, and who gets the objects at the end of the day.

Utilising a combination of historic maps and modern maps can give you ideas of places to exercise your metal detecting skills. One might, for example, pay close attention to changes in the paths of rivers or streams that might suggest areas other searches have missed. Or, you might determine locations of buildings which have been torn down and left to nature to heal.

A very real concern - held by historians, archaeologists, and the public-minded - is the potential harm resulting from rampant, undisciplined treasure hunting. There is a temptation to remove artefacts from the site without bothering to document the finds properly, thus creating a double-harm; removing the object, and eliminating any historical value of the find.

If you do suspect that you may have run across something of historical importance, however minor, try your best to contact someone who can determine if this is so. You can also document the place and time - easily done if you happened to bring along a Global Positioning System (GPS) device. Additionally, refrain from trying to clean away any dirt or grime. You may easily mar or damage the piece, greatly or slightly, if the best techniques are not employed (no rubbing it on your sleeve, unless you suspect it is a magic lamp with a genie).

If it is not of historical importance, but rare enough (say an interesting coin), you will still want to protect its value by seeking knowledgeable help in cleaning it.

Of utmost importance, when detecting metals, is the swing style you apply to your device. The coil section should always be kept parallel to the ground, and as close as possible to it while avoiding scraping the face of the unit. A pendulum swing would not be consistently close, so an arcing motion is generally thought to be most efficient. The arc is centered on your (probably moving) body, from right to left and back.

Keep focused on the safety of your footing, and the sounds coming from the user interface (the box at the opposite end of the stick from the loop). These are all very technical terms, but you'll get the hang of them as time goes on.

Try to overlap the areas being detected by the arc, because it would be such a waste to walk over an entire plot of land and only cover 50% of it electromagnetically. If you want to really maximise the likelihood of 'hits', remember that the detection sensitivity of the field tends to narrow the deeper it goes, so even barely overlapping the head widths may leave deeper objects undetected.

For additional information on proper metal detecting, artefact cleaning and preservation, and the laws regarding metal detecting and what you are allowed to keep, there are a multitude of good books available, many respected websites, and probably local clubs you can join.

If all this seems a bit much, just kick off your shoes, grab yourself a couple of twigs, and let your psyche be your guide.

Just remember to send 10% of everything you make to...

1In their 1996 song of the same name. They Might Be Giants - really a band of normal sized performers - sang of the metal detector's exciting uses at the beach, including their preference for metal detecting over volleyball or girl watching.