The Art of Making Devilled Eggs Content from the guide to life, the universe and everything 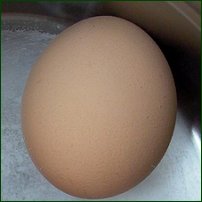 The egg is a marvellous bit of engineering that encapsulates every vitamin, mineral, protein, peptide chain, fatty acid, and so on, necessary for the creation of a living thing. Chicken eggs have only 70 calories1 and are the most commonly consumed egg by humans (by weight, although caviar may beat them for sheer numbers).

Chicken eggs come in convenient sizes and are easily combined. They make a great 'binder' in recipes, or they can be fried, poached, sherried, scotched, scrambled, made into an omelette, and served in a myriad of ways. If you don't want to wait 21 days for the egg to hatch, and months more for it to grow into a chicken, there are many ways to enjoy this symmetrical ovoid. One of the most tasty and attractive is the devilled egg.

The Devil, you say!

For anyone who may not be already familiar with the concept, 'devilled' means highly spiced. It often means using mustards or seasonings, but has also come to be used to describe dishes coated with seasoned breadcrumbs and grilled. In the case of devilled eggs, it refers to both the seasoning and the method of presentation.

Chicken on the Half Shell2

Briefly described, devilled eggs are appetisers made from hard-boiled eggs that have been cut in half lengthwise, and the yolk area filled with a pâté filling composed of the original yolks, mayonnaise, mustard and seasoning. The final product is dusted with paprika for additional 'devilling'.

The goal of this Entry is to help reach beyond this description, enabling the good reader to raise these well-received appetisers to an art form.

Perfect hard-boiled eggs start with the correct technique. Assuming you have half dozen eggs that have been candled3 and cleaned - they'll probably be from a market - lay them on their sides in a container and chill in the refrigerator for seven to 10 days. You lay them on their sides to keep the yolks as centred as possible, turning them on their axis every day or two. The seven- to 10-day period helps the cooked egg to separate more easily from the shell membrane.

Second: How to Boil Water

Bring the eggs to room temperature with a warm-water bath in a bowl. Use a large stock pot with a strainer insert4, especially if you increase the number of eggs, to avoid creating hot spots where the eggs touch the bottom of the pot while the heat is on. Place the eggs in the pot and add cold, filtered water5 until the eggs are covered by an inch of water. Remove the eggs, add a teaspoon of salt to the pot for every half gallon of water, and bring the water to a full boil.

Once the water is ready, use a safe kitchen implement6 to carefully lower the eggs into the water.

Using a large pot will help to equalise temperatures around all of the eggs for even cooking, so long as the water and eggs are kept gradually moving through convection, caused by the heat, and occasional stirring. The salt will further help break the connection between the egg's membrane and the semi-permeable shell.

Third: Turn up the Heat

Once you've achieved a full boil, with the eggs in place, cover the pot and immediately remove it from the heat. Let them continue to cook for five minutes7. After five minutes, the whites should be pretty firm. Remove the eggs and lightly crack the shells. Tap them with a spoon, the handle of a butter knife etc. Give them a good, all-over crackled look and put them back in the water for another eight minutes.

There are those who consider cooking to be an art, rather than a science. But these people don't realise how much science is involved in their cooking. For example, if you have the eggs in the pot during the first boiling and use a meagre flame, they could be nearly cooked before you move the pot off the heat. If you use a mighty flame, the water will be boiling before the eggs get used to the idea of the hot tub experience, and they may crack prematurely.

Use the two-stage method to avoid premature shell breakage which will allow egg white to leak and cook outside the shell. The reason for removing the boiling eggs from the heat and limiting the cooking time is to keep the yolks a bright-yellow colour. The grungy green coating that can form around the yolk is caused by overcooking when the iron of the yolk interacts with the sulphur of the egg white.

The idea is to get the yolk to firmness without becoming green. Perhaps it won't make too much difference with this recipe, but you'll have the ability to maintain bright-yellow yolks for other hard-boiled egg recipes.

Towards the end of the cooking time, you should prepare a cold water bath for the eggs in a large bowl. Ice water is even better. You can use a slotted spoon or spider to transfer the eggs to the bath and cool them down rapidly.

The cooling also helps to contract the boiled eggs away from the shell. Do you sense a certain paranoia here about the shell? The worst part of trying to create really nice-looking devilled eggs is smoothly removing the shell to leave an unpocked egg with no leftover shell bits or membrane. After that, it's all downhill.

Fifth: Mrs Peel, we are Needed!

Peeling will be easiest when they've just cooled. Placing the eggs in the water after crackling them should allow hot water to seep in under the shell and membrane, making this relatively easy.

Some people like to peel their eggs under running water. If you hate pouring perfectly good water down a sink, peel them under water in the bowl in which they cooled. With luck, at this point you can start sliding the egg shells off the hard-boiled egg with your thumbs. If not, be very careful not to nick the whites with your fingernails.

You may have to choose a likely place to pull some shell away. If so, try to start at the large end. Then start rolling the egg between your fingers (still under water), lightly compressing the shell to let the water in to further hasten the process.

You should now have six beautiful white eggs in your bowl. Pat them dry and place them back in their container. Chill for an hour or so to let the yolks cool further.

The Devil Made me do it

1) Slice the eggs (traditionally, along the long view - although there are attractive zig-zag slicers out there) in half.
2) Remove the cooked yolks to a shallow bowl and crush with a fork (starting the crushing now, while you can see the yolks, will help prevent lumping later).
3) To make the pâté, add all of the ingredients, except the egg whites and paprika, and mix well using a fork; or use a mixer to whip it.
4) Arrange the egg halves attractively on a devilled egg plate, salad greens, beds of pepper corns or dried beans; just something to keep them from sliding around.
5) Pipe the mixture back into the egg halves with a pastry bag and fancy tip, or just a bag made from some kitchen parchment, or spoon it into a plastic sandwich bag and snip off one of its corners.
6) Cut or tear a yolk-sized, or slightly less then egg-sized, hole in a piece of paper to act as a paprika stencil and dust the tops of the filled egg halves.

You Only go Around Once

Variation ingredients (use only one):

Hold on a minute... Give it some time... Something will occur...

1Although the average chicken egg has 70 calories, it's thought it takes more than 70 calories of energy to digest one, resulting in a net calorie loss. The other ingredients of devilled eggs, however, more than make up for that loss.2In reference to, but not to be confused with, oysters on the half shell.3Candling is the process of identifying eggs that contain chick fetuses by viewing them up against a light (like a candle).4For small numbers, a medium size pot with a steamer insert will do.5Filtered can be used for consistency, but you can really use any potable water.6 Food tongs, 'spider', slotted spoon, wooden spoon, or serving utensil.7Actual times may vary according to altitude.8skip the mayo and use Miracle Whip or salad cream. This has two facets: the taste is tangier and zestier than mayonnaise, and mayo has 90 calories from fat per tablespoon versus 20 with the variations.9Koshering salt is suggested because it has a bit less 'bite' than the normal NaCl table salt, and mixes well.10With the potato substitution, you can forget all the instructions regarding refrigerators, seven- to 10-day waiting period and storing them on their sides. Stand up those spuds, if it suits you.