Cooking With Steam Content from the guide to life, the universe and everything 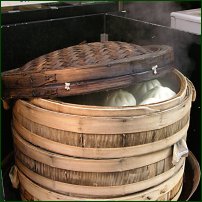 Close your eyes and think 'steam'. What do you see? Do you see a chugging locomotive? Or a hooting steamer disappearing over the horizon? How about lissome bodies shimmering in a sauna, or if you have a comic bent of mind, the portly Obelix walking around the steaming Roman hot bath covered in an itsy-bitsy towel? Do you hear the whistle of a kettle and anticipate a steaming cup of coffee?

Well, how about the vision of a pressure cooker with all the associated memories of mother's cooking?

Steaming has played a major role in Oriental cooking as their staple - rice - is best suited for this method. The Chinese have used steaming devices for more than three thousand years, as evidenced by archaeological finds of stone steamers from the province of Yunnan. By the 8th Century, the Chinese had mastered the art of making steamers from thin cypress strips, which have been replaced by bamboo today. In India, the modak, an ancient ritualistic food offering to the elephant-headed deity Ganesha, is a steam-cooked preparation of rice flour dumplings filled with grated coconut and jaggery1. Couscous, an African dish made of steamed semolina, finds reference in the works of Ibn Battuta (1304 - 1368?) said to be the greatest traveller and travel writer of his era. Today, couscous is a popular dish in many North African countries, and has spread worldwide in its use.

In a world of microwaves and deep friers, steam cooking has been relegated into the background, often labelled as 'bland' - the unkindest cut of all. Steam best preserves the texture, flavour and nutrition of the ingredients. A published study2 mentions that the level of flavonoids3 lost after steaming fresh broccoli was 11% as compared to a 47% loss when pressure cooked, a 66% loss when boiled, and a whopping 97% loss when microwaved. The biggest casualties of boiling are vitamin C, vitamin B1 and mineral salts that readily dissolve in water, lost when the water is thrown away.

Steaming lets the food cook in its own juice and minimizes loss of nutrients. Moreover, the food retains its texture simply because heat from the steam is gentle and slowly diffuses through the ingredients to create a uniform heating environment. Unlike agitating, bubbling, boiling water, steam does not 'roughen up' the cellular structure of the food tissues or their aromatic compositions.

Steaming provides an interesting way of adding flavours to the food, too. Spices such as ginger, pepper, cumin and coriander can be added to the water, flavoured with bouillon cube, fresh stock or wine. As the water boils, the essence rises with the steam and flavours the food. For example, traditional cooks may prepare couscous in a couscoussiere - a double layered boiler - where the spices, onions and vegetables/meat are added to water in the lower compartment and the semolina is placed in the perforated upper compartment. The stew beneath suffuses the upper layer with incredible aromas and cooks the couscous through to feathery-light perfection.

Okay! So What Exactly is Steaming?

Steaming can be classified into the following categories :

So What's so Great About Steaming?

Now close your eyes again and think 'Steam'! Does your mouth start watering as steak and pudding and dumplings and fish and couscous dance about in the swirling mist of aromatic steam? So why not try steaming right away? Who knows? You may end up showing a trick or two about cooking boar to the greatest connoisseur of food - Obelix!

1The traditional unrefined sugar used in India.2'Blanching and long-term freezing affect various bioactive compounds of vegetables in different ways', Journal of the Science of Food and Agriculture, Volume 83, Number 14 (Nov 2003): p1389 - 1402.3An antioxidant compound. Flavonoids are organic pigments that provide plants with colour, from red through to blue.