Southend-on-Sea, Essex, UK Content from the guide to life, the universe and everything 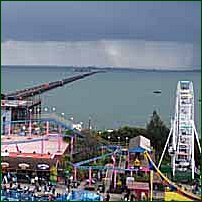 Southend-on-Sea is a seaside town, situated on the estuary of the River Thames. It is quite famous, or perhaps a better word would be notorious, having somehow acquired a reputation for being rather unpleasant, noisy and dirty. At a glance, this is the impression given to potential tourists. However, take time to look around and it isn't really that bad. Southend's greatest claim to fame is that it is home to the world's longest pleasure pier. At the end of the pier are restaurants, souvenir shops selling seashells and Southend rock, and a museum about Southend's lifeboats.

The beaches of Southend-on-sea have won numerous awards;- in 2002, three of the beaches were given permission to fly a Blue Flag - a privilege showing that each beach fulfils the requirements for recognition as a top European beach. There is a stretch of road that goes along the seafront, known to the locals as 'The Golden Mile'. This is where the arches are to be found, along with the 'Adventure Island'1amusement park, and numerous game arcades. On summer nights, it is lit up by coloured lights depicting dolphins, smiley teddy bears, jugglers and other such things. This is also apparently the only place to be on summer weekend nights if you are a local teenager - young people take their friends and cars down to the seafront and either drive around for hours or stand in the car park doing nothing and appearing to enjoy it.

The aforementioned amusement park contains attractions that have been there for decades, such as the Crooked House, a quaint little building, crazy but charming, full of sloping corridors and walls, distorted mirrors and moving models based on the nursery rhyme 'There was a crooked man, who had a crooked house...'. It has recently been updated and now contains big fast things with flashing lights that go round and round and provide people with a thrill and a sense of nausea. The place is closed in some months, but in the summer, a lot of the attractions are half-price after 6pm.

At one point on this road 'The Arches' are to be found, a whole row of fish and chip shops, tucked away out of the wind, with classic English fayre to die for. They are not glamorous places, but the service and food is nothing short of first class.

For the shoppers, Southend High Street is quite adequate, with all the usual high street shops. For those who wish to enjoy themselves but are unable or unwilling to stomach the rides in Adventure Island, the Kursaal contains a concert hall, a bowling alley and more. It has burned down and been rebuilt a few times, as have the old ballroom and the end of the Pier. Many parts of Southend have burned in the past, but the resort seems somehow to survive all of this.

Every summer there is an annual carnival, in which decorated floats parade the streets during the day, and people turn up to watch and throw money. The money collected goes to charity. There is also a nighttime carnival, more spectacular than the first - the night sky is filled with coloured lights and fireworks.

That's not all that there is to be found is in Southend, though. Old Leigh, the lower half of Leigh-on-Sea, is an ancient fishing village, with a beach made of cockle shells. The main industry in this part of Southend is fishing. Fishing and cockle boats sail out and bring back fresh seafood, including cockles, prawns, shrimps and countless types of fish.

Overall, Southend-on-Sea is a great place for a day trip. It's full of attractions and, officially, takes 25 minutes to get to down the A127 from London. Soon it will be an even better one, as a team of skilled architects and designers are developing plans to improve the general layout and ornamentation of the town.